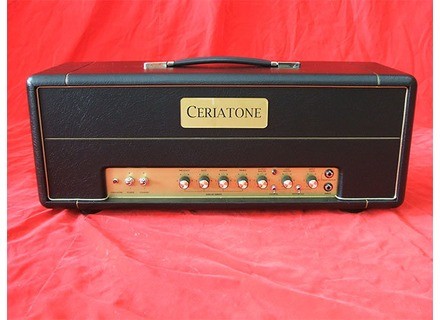 Djezeking's review (This content has been automatically translated from French)

Configuration less impious than it seems:

The clean is managed by the INPUT GAIN and MASTER VOLUME
Channel saturated with INPUT GAIN, VOLUME and LEAD MASTER VOLUME
So you have to manage the levels and saturation channels live long.
Note the switch RYTHM allowing cruncher see a little more clean channel and helps thicken the overdrive channel
It is not controllable live, but still provided a potential studio dual channel (clean and crunch saturated saturated fuzz)

Can pass through the equalizer to several types of sound, jazzy clean, sparkling clean, saturated rhythm, Lead, crunch muddy ..... Of course, everything depends on the speakers. Tested with a 4X12 in greenback, beautiful diffusion (normal) presence seconded, a good foundation of sound.

Tested on a 1X12 V30 (orange ppc 112), and although I must say that the V30 maligned once surprised me ..
include the definition of the album Appetite for Destruction with the grain so light, requiring a diabolical precision, but once mastered is magical. I speak of course use in connection with a Les Paul.

Tested on a loadbox Palmer and a type rating simulator two engineering and guitar rig: it keeps the heat lamp but nevertheless we obient flat sound .... but sets.

It will be difficult to reach heights of saturation as orange or soldant.
But sometimes we wonder what good ....

Shop TAZ for 1 year, I discover as you go. This amp will always surprise me.
Must tame, tame. But I do not regret my purchase. I sold my AFD Slash, can be wrong because it is really another very good amp (less versatile, more high level sound and tuned especially mono channel). I posted a while an ad for the sale and ultimately worse, NO

I even buy a tiny to repeat, but this one will stay in the boxes. I prefer to lug around 20 kg but a sound that suits me rather than 8 kg and a train for the clean crunch Lead.

ADD ON: I had the opportunity to test a JCM 800 on the cabinet of the same name. it was really good in my memories, a little thicker, but less accurate and less defined mono channel.

Le Taz's review (This content has been automatically translated from French)"The art of the replica!"

CeriaTone 2550
5
If you are interested in this amp is that you are looking for a Marshall Silver Jubilee, and probably a fan of Slash, Joe Bonamassa, John Frusciante, the Black Crowes or all at once! Anyway, TB 2550 is a copy PtP (point-to-point) Marshall 2550 head 50w (25w splittable in) operating with 2 EL34 and 3 12AX7 and distortion which is produced by a diode bridge, as on the original!

We thus find the same specs as the 2550 original, in a head all times smaller, and contained in a box-type &#39;59. It is far from look "fabric" of the JCM800, 900.2000, JVM, but also original silver. But it still has to face. The buttons are not types tapered like a good Marshall, but the overall finish is really nice quality, which flatters the new owner. This is really beautiful, very well done ... even better than the original in terms of neatness Skin!

The use ... a preamble is necessary: ​​a Les Paul, Gibson or Epiphone or she will use the same qualities and the same faults (Mandatory Strap lock, access to acute, weight, etc..). It is the same with the 2550 CT which takes each side of the medal Marshall 2550. Qualities and defects that I will describe here are THE SAME 2550 on the CT and Marshall 2550. Here is operating, own both brands, because the configuration is not necessarily easy.

The joint equalization in itself is not problematic. Grain, the texture of the two channels complement each other perfectly. Where it gets complicated is in the management of gains for both channels. The clean channel is managed with input gain and master volume, the lead channel also uses the control input gain, volume lead (to attack the power section) and finally the master volume. So we have to compromise. Use the drive to back (ie input gain) will give you a clean channel crunchy). The crunch is not bad, but the drive down may prove quite imprecise. In any case, contrary to what I read on SJ Marshall JCM Slash or it has what it takes as gain, when it is not used as a cache misery, if you know what I want say ...

The lead volume and input gain thus work in cascade, it will be necessary to test dosages, without neglecting the volume balance of the two channels. Use the drive to push the amp you will gain, but color the clean channel. It will sound good, but will be less "flexible" as the basis for the work of another distortion. Basically, you need to make choices, unlike the first split channel of Marshall (JCM800 2210 or 2205), the channels are truly independent.

Finally, it was the rhythm clip that balance a little crunch on the clean channel. Not very musical with double windings, it is interesting with single coils, but not detachable foot. Note that as its model, it colors the sound of the lead channel. You lose a little low (not his general, but the instrument) and adds a saturation not necessarily accurate, it is also much less nervous. The difference is significant on both channels, we would have liked the opportunity to select the footswitch. CT could have been removed from the original for once ...

So, the first notes, you feel you are good at Marshall. It is almost surprising that it is checked Ceriatone is written on the box!
Nevertheless, there is a record in modern Marshall. Attention, I mean compared to modern Plexi, Master Volume and 800 single channel. It is a "rewriting" of the models 2210 and 2205, two channels also using diode bridges. The sound is different, however, all of these models can be seen in particular it develops more bass and less bright. The grain is there, but completely homogeneous, so modern in its texture: less "metal" than in 2210 or 2205 that go beyond saturation, less "harshy" fuzzy or a 2203 or 59 fucked thoroughly . It is in fact a kind of synthesis of all this, a kind of best-of. You will not have a dizzying rate distortion at the Soldano SLO, Marshall or 2210, but rather a JCM 800 2203 with her was balanced.

Brief. To make AC / DC, or blues-rock, it&#39;s all good = plug & play!
To type in the Slash ... sorry for the legend, but it will give a little boost, type TS9, BB Preamp, Boss OD2 (as Zakk Wylde), which will allow you to smooth out the sound of one hand, but also to continue to use the clean channel.

For my part, I set the equa about noon and not the rule according to the volume (a small preference for the mode 25w), and I&#39;m about the same for setting and lead input volume: it has a clean channel then dynamic (but not neutral) and a channel so saturated AC / DC, that is not too distorted, leaving many in the game dynamics, precision and divine a grain.

I&#39;ve had 15 days ... it does little to express myself, I know. In my defense, I play on a Marshall JCM 800 2210 (and I flunked 4 others!), And have owned or used 2203, JVM, JCM 900, 2550, 2555 SL, TSL601, AFD100, YJM 100, but also Rivera, Fender, Peavey, Engl, Brunetti, The Valve, Mesa Boogie, Jet City and so on. I&#39;m pretty demanding, and a big fan of my 2210 that sounds ... finally sounded hell but ages badly to my dismay (and found no replacement). By chance, I&#39;ve tested several times, and use on stage 2550 original (with a personal history ... incredible). I was not a fan at first, then use on stage made me appear as a serious alternative to my 2210. Without being totally fan, this is what is best (without modification) in Marshall outside my JCM 800. And since the market price, I ventured to take a Ceriatone on occasion. For the budget announced, this is a good deal. But be careful, this amp application of dexterity and expertise, we have not one of those amps metalloids rate distortion astronomical cover the sound of a synthetic prosthesis phalanx ...

SO HERE IS THE PART THAT YOU most interested in THE COMPARATIVE
I was able to test and compare the two live on the same baffle (old marshall cabinet completely rinsed in greenbacks). It has the same amp, the relationship is obvious. But there is still a certain difference between the two. CT is much less aggressive in the treble, much more balanced than the Marshall. Unlike bright cap? The Marshall seems nevertheless develop more power, or rather dynamic (at a reasonable level at least) noticeable. I also noticed that Silver was more punchy, more biting, finally answered a little better in my attack. Difference clear enough not to depend lamps, but not sharp enough to be a design flaw prohibitive. So I left my sorcerer will compare the voltages to see what element is involved: bright cap, transformer?

Anyway, the 2550 is a Ceriatone amp beautiful, neat, probably improved, which will fill the rockers of all stripes, but asked, like its big brother, a certain know-how to get the best. This is not a beginner amp, go to the Slash will not be as simple as a DFA (which is a toy, in every sense, even pejorative, the term). This perhaps explains often found the Silver Jubilee for sale. Like all good amps, it does not sound to you, go get it, even with the teeth if needed. Not easy, but when you get there, the result is much more rewarding! I prefer this to any Ceriatone Marshall present, whether modern or reissue.

Zaoii's review (This content has been automatically translated from French)

CeriaTone 2550
5
So this is the clone of the jubilee 25th anniversary of Marshall, re-edited later to Slash's name.
Made in Malaysia by mimine of these cute little guys at Ceriatone.
I have the 2555 version is 50W ...
I did add a master volume to exploit it fully at home.
In the belly: 2 + 3 12AX7 EL34
This is a two channels: one clean and one lead on the clean was an "option-crunch-vintage" but I do not know if we can say that it is a 3 channel ... No we can not ...
It would have been cool this third crunch channel activated at the foot .. finally ...

The EQ is very effective.
It is very easy to obtain the desired sound.
My master is an extra happiness.

Before him I had a Marshall 30th anniversary too "bassy" for my taste and lacked a little sharp even with an equalizer.
Here the sound is superb in every way ...

For me its the ultimate Marshall Lead! (Although I also love the JTM45 and Plexi grandpas), here the gain is unlimited.
With some kind of boosts Keeley TS808, or FuzzHead BBpreamp, the grain is moving towards the beautiful, the magical ...

Clean side, it lacks a bit of shine, Marshall-style what! With a clean boost (I have the katana), all the harmonics and richness of sound is emphasized: problem solved!

For crunch sounds, I have more trouble getting something worthwhile in my ears, I prefer to boost the clean channel with the Fulldrive Mosfet or Keeley TS and there is beautiful ...

I love it!
It can do everything you expect from a Marshall and more.
He appreciates the pedals which is good practice to improve or change the sound a bit.
Cériatone it's good stuff ... I highly recommend