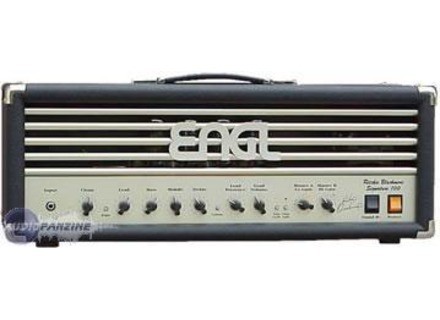 ENGL E650 Ritchie Blackmore Signature Head
5
When I purchased this head, I had been looking for a high gain, metal-capable amplifier. I had my aim on an ENGL head due to a previous experience with a Powerball. I had no memmory of how it sounded, only that it roared, so I wanted one. Then I stumble upon this baby. The name did scare me a bit like it does to many people when they see it, but I was so wrong.

I use this amp is rehersal and stage. My bands play Power/Symphonic Metal and Pagan/Death Metal respectively. I haven't recorded with it yet, but once I get to it I intend to use it if I can since it's my main head and it bears MY kind of sound.

It was my 4th amplifier in 16 years. After using rack gear (ART and Rocktron), owning a Marshall JCM 900 SLX (the single channel JCM800 on steroids version, not the Dual Reverb or the MKIII) and a Fender Blues Deluxe, I found one amp that, in my opinion does it all and in a better way.

I got to compare the sound of all those amps, plus the Powerball that I wanted against the Blackmore and there was simply no contest. Where the Powerball "sucked" the tone to sound heavy, the Blackmore shined while keeping it brutal, more clear and articulate. It's an incredibly tight amplifier, you can leave the Tube Screamer to tighten up those Mesas and Marshalls because the Blackmore does NOT need it.
- The rack gear, I know the Blackmore it doesn't have all those features like the ART SGX 2000 Express pre-amp that I used, but those features felt a little overkill. Too complicated to use and program (I had a pro for that) especially for a guy who likes it simple like me. I used a Rocktron Velocity 250 as a power amp but I feel it's no way near what the 4 tube power section of a tube amp gives you, a whole other level of "juice", it's simply an entirely different world. May be debatable but it's my opinion guys so please bear with me.

The Marshall was a great amp, I'm not spreading Marshall hate here. The JCM 900 SLX was used by Kiss and Cannibal Corpse, so you can see the range of that beast. It did some nice AC/DC, but once you went to the metal ball park the distortion did need a little bit of tightening, like most amps do when you want them to "ultra chugg". Although an impressive power beast, it was a single channel amp and thus not versatile enough for my humble needs.

The Fender Blues Deluxe, from my "blues days" did on the other hand, have that neat Fender cleans and reverb but... it had no flamethrower!!

The Blackmore has 2 channels (Clean and Lead) divided into 4 different gain stages.
Clean channel:
-Lo gain clean - gives you the fenderish clean, just as bright and shiny but less ice picky. I do prefer the Blackmore's rather than the Fender.
-High gain clean - breaks up the sound. Awesome for some dirty blues and 70's stuff.

Lead Channel:
-Lo gain lead - gives you that Marshall voicing, it does some nice plexi tones, AC/DC kind of tone, it's pure and simple badassery.
-High gain lead - it's the flamethrower!! Lock up your daughers and shoot your sons. This amp goes to 12! It packs all the gain you could ever want (most of you), it's super tight and mean. It will do Metal with it's eyes closed. Incredibly punchy and it just roars. Just clear up your game because if you make a mistake the amp will show. The distortion is full and rich, and it won't lose tone. Just don't roll the mids all the way back like a noob and you'll be fine

There's a countour/reverb button so it rounds up the sound and boosts mid frequencies so that your leads will sound even better. However it does not have controlable reverb knob.

The pros of this amp are: 100 watts of tube powaah!! Flawless tone, sparkling cleans and BROOTALS!! The single EQ makes it's really easy to dial in a fairly decent sound. It's very versatile and can do from Blues to Death Metal with ease. The FX loop allows you to blend it with some extra effects. OH and it has 4 red lightbulbs inside that give it a red glow!! How cool is that?? It's super tough and the quality of the construction is incredible, it should be called Panzer!

The cons are: if you don't have the z5 footswitch you are screwed. Some people might find the shared EQ a flaw (I don't). It has no MIDI port, so might not be the smarter choice if you are into that kind of thing. Like I said before since the amp is tight and clear, it will display your skills, so polish your technique (not necessarily a con).

Cheers and thanks for reading!
Did you find this review helpful?yesno
»

Simply looking at it, it's hard to imagine that it has four channels, but it does!!!
No need for a manual, it's plug and play. It's very easy to find the sound you want.

This is where it starts getting interesting!
At the beginning it's obvious that it has the Ritchie Blackmore signature and that it's an amp to play Deep Purple...but don't deceive yourself!

The crunch channel is one of the amp head's main strengths. It delivers a big and powerful crunch. If you increase the gain you can play power rock without a sweat!

The lead channel is the BIGGEST SURPRISE with its huuuge distortion! It doesn't sound as tight as a powerball or invader, it's a bit raspy and comes perfectly well through the mix. The attack and response are precise.
It's perfect for what I do, play heavy metal, that is.

I bought it last week and — call me crazy — I got rid of my Invader to be able to afford it.
The Invader is a great amp head for really fat metal, but I think the distortion sound lacks lots of mids. I had a hard time trying to come through the mix.

I foolishly tested the Blackmore, because I knew it was based on the same technology than the Savage (which I covet). I was dumbfounded and fell in love with it right away. The bottom line is, it's simple and super effective.

This amp head is responsive to the guitar changes (active/passive), you simply need to fiddle a bit with the pots and you're on your way again!

A tip: Insert a noise gate in the effects loop because it produces a lot of noise with distortion sounds. That's what I did with a ISP Decimator and it's simply prefect.

It's an amp head with a truly excellent value for money.
Did you find this review helpful?yesno
»

yoTrakkz's review"ok, but there are betters ones on the market for this price"

ENGL E650 Ritchie Blackmore Signature Head
3
I used The E650 Ritchie Blackmore Amp to travel and practice with, and it has exceed my expectations in every way. I really love the built in effects. That is probably my favorite feature. I also expected such a small (2 watt) amp to have a very thin or sterile sound. However, the sound coming out is very full and deep. Just amazing! I wouldn't recommend this amp for "band" practices. But if your looking for a great practice amp packed with effects and different amp sounds, then this amp is for you.

This amp is loud enough to be heard over a rumble 25 bass amp and a pulse drum kit. i use this amp with an ibanez g10 and it works perfectly. and all these rumors that started about two watts are wrong. this amp is 30 watts.

On the downside, Its distortion effects will honestly, unless you play it in a low gain, and 1 pick up, and volume down, will sound like shit. I couldn’t even play Unholy Confessions by A7x and that’s not even deathgrind. And when i tried playing FINITE by origin it was just awful. This amp is bad for distortion and metal guitars. So if your planning to be in a metal band, Dont get this guitar. But, this amp does have an upside. If your just starting out on guitar, and are planning to play more acoustical music. This is a good amp to start with. Not the best, but it has a nice acoustic sound. So this is good for acoustic people.

Overall, a good amp for acoustic players or beginners. I suggest looking into some of the cheaper Roland amps that sound a little better than this one and are a little cheaper. You will find something better for this price range. This will leave you unsatisfied if you aren’t a beginner.


2 people did not find this review helpful

ENGL E650 Ritchie Blackmore Signature Head
5
- What type of amplification technology does it use (tube, solid state, ...)?
- What's the output power?
- What are the connections?
- What controls, effects etc. does it have?

Ultra-powerful tube sound
No effects — no need for any

- Is it easy to dial in?
It couldn't be easier

- Is it easy to get the right sound?
It always sounds fine. You can play ANY style you want (even funk/jazz, with the clean channel)

It kicks ass with a good 4x12
I think this amp is amazing
It has only one drawback: No pedal, but a Marshal switch is enough

- Which sounds do you prefer?
All the sounds this amp produces. Otherwise, I like to hear the sea and birds

- How long have you been using the product?
I had it two years.
I needed money and sold it
What a jerk

- Which features do you like the most / the least?
All channels sound great. The clean channel is perfect

- Did you try any other models before buying it?
Lots

- Based on your experience, would you choose this product again?
No amp has every thrilled me more
Did you find this review helpful?yesno
»
Read the 10 user reviews on the ENGL E650 Ritchie Blackmore Signature Head »