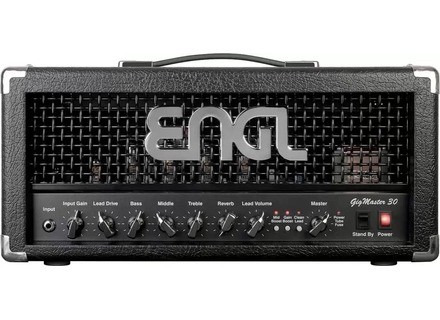 Also: an Accutronics spring reverb and a gain of boost the Master well hidden. All options are not accessible by switches, but with the help of pedal control you can trigger the reverb, effects loop, MVB (Master Volume Boost), changing channels, gain boost and the medium boost.

Setup is simple, the manual in German and English is very clear.

I find the E315 very well because it respects the guitar that you plug.

Cort Viva 2. (Guitar equipped with two double coil with push pull option that splits the double in singles and one single coil) Canal clean: mode splitter can easily play arpeggios and other rides, round off the reverb sound but must not abuse it too . The mode humbucker crunch is inevitable.

BC RICH N7: of my stuff, see overdrive crunch, whether easel or neck pickup. We must lower the guitar volume to get a clean sound, but you lose all the grain.

Fender American Standard Telecaster: it sounds alone, arpeggio soft, smooth ride ... by against the attack as soon as this is a slight crunch appeared EXCELENT!!

CHANNEL LEAD
Setting the same for four guitars: Input Gain, Lead Gain, Bass, Mid and treble to 12.
Cort Viva 2. Saturation is like seeing rock Hard rock, mics made in China do not help much. But we manage to make the guitar sound depends on how you play.

BC RICH N7: right there in there against the distortion! the seymour duncan doing their jobs very well. The 7th string will shake the walls, I leave you dreaming for the style of music you can play. With the Input Gain and Gain Lead to 100% saturation of drool everywhere, if your game is clean you will be fun for extreme metal.

ESP kh-2: precision guitar is very well respected, we get all kinds of sounds by playing with the knobs and pickups of the guitar. With the Input Gain and Gain Lead to 100% saturation fatigue and it will find the right setting for a large modern metal style distortion.

Fender Telecaster American Standard: e305 head renders very well the timbre of the instrument. Dynamics is more than satisfied. With the Input Gain and Gain Lead to 100% the sound is terrible!

In general the resulting sounds are more than convincing, but a presence control would have given luster to the whole. After changing the lamp preamp I noticed a change in gain distortion and brightness but it&#39;s still in my ears.


Mid Boost: big bump in the medium, which allows two color settings of the medium.
Boost GAIN: adds a bit of gain, you need to spend rhythmic solos.
MVB (Master Volume Boost): another boost, in case you need to boost even more.

For a small amp head we find most useful and standard settings. Even if the head is small in size, it is widely powerful to follow you in concert. Attention to volume, there is no "power-sock" as the e315 and you still have to push to get good sound with crunch and distortion. (The neighbors will not like)
This head was designed for studio and to play apart from ENGL, but hey it will tell you anything if you embark on a concert hall.

Negative:
- No adjustment of "presence" lack of brilliance.
- You have to acquire three pedal-type Z-4 ​​on engl-stereo jack to control all the sounds and options available. The 74 is about 70 €, expensive addition, but of course there are cranks generic to 15 €.
- The reverb is too invasive.


Positive:
- All the switches and knobs are on the front, no need to return the head to get there.
- The resulting sounds are rich and vibrant friendly instrument.
- The team is very responsive to ENGL *.

* FYI: I bought this head by the Internet in Germany, but the reverb did not work! I contacted the store and I had to return it. Greeu gneu gneu I did not want to part with, even for three weeks. I went for a walk on the site of ENGL, I filled out a form stating that all going well except for the reverb, a day after I received an email asking for my mailing address and 6 days later by UPS any reverb New

ENGL E305 Gigmaster 30 Head
5
it is a 30W tube amp 2 channels, one clean and lead. the equalization is common to both channels.
intgre reverb, an effects loop.
a mid boost
a gain boost.
A volume boost,
switch on / off for the loop
an on / off switch for the reverb

All controlled by pedals.

rglages are the ultra simple. I love this type of grain and the tip top short it suits me perfectly ... the EQ 3-band passive ffective trs. It customizes sound easily.
we play on the input gain, gain lead, to work the signal saturation. the two funds give sth to trs trs saturated dj.

I quickly read the manual to see if there were any tricks but I dj pig.

it is exactly what I play ... rock hard rock heavy power metal a little ...
Only small problem for some saturation grows, we must sacrifice his clear, it becomes crunch ... you can always play on the guitar volume to find a clear sound.

The only downside is that you have three pedals in the IDAL CONTRL double switches for the animal feet ... or buy something to connect the Z11 chr pdalier a midi ... began the figures ...