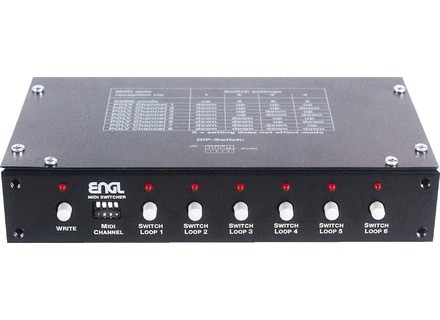 Z-11 Midi Switcher, Other MIDI Controller from ENGL in the Z series.

ENGL Z-11 Midi Switcher
5
I have since August 2005
works nickel!
Simple, effective and CHEAP !!
6 switches
Did you find this review helpful?yesno
»

kasimir.phunk's review (This content has been automatically translated from French)" great"

no pb for use with all those heads used with a line6 M13
I plugged in the z11 out footswitch and all functions are available for use.
just genial.
Did you find this review helpful?yesno
»

Z3r0's review (This content has been automatically translated from French)

Simple and effective, it allows to switch the channels of an amp with a pedal such as noon.
I use a Boss GT3 and a head ENGL Thunder.
It is relatively easy to program even though I found the manual rather crappy.
In fact did not understand the method of programming by reading the manual, I finally just plugged in, being careful not to activate the phantom power MIDI (small switch to move).
In short, I use just one or two channels so the four others are still operating, but sooner or later it could still be used.

I put 8 because it works very well but it is expensive, the adapter provided is somewhat limited quality issue, and the manual is very vague.
Did you find this review helpful?yesno
»

CHAM-NEwTT's review (This content has been automatically translated from French)

It is small it fits on the side of my head thanks to the small roadster pad members.

Just plugged in, it works immediately and without hassle. It's perfect in use.

It's still a bit expensive for my taste, but it's worth it.

The best thing is that it allows for programming: it started automatically midi channel 2 while I was in fact multi midi channel 1. So I can do programming with my Behringer FCB1010 MIDI foot controller.

Pb only for me, the power supply sector very average.
Did you find this review helpful?yesno
»

Other ENGL other MIDI Controllers