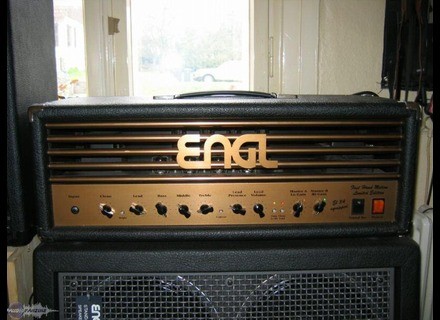 ENGL E654 Fast Hand Motion Limited Edition
4
ENGL amplification makes some of the best metal amplifiers in the industry. They are very good to building highly saturated in loaded distortion type of amplifiers. This amplifier is a bit of a departure from that norm of their style. This amp was on a limited run and it is basically a signature Ritchie Blackmore amplifier without the signatures logo and the blue faceplate. This one doesn't have his name and it's basically a gold looking face plate. All of the features and all the tone is pretty much the exact same. It's only a cosmetic change for someone who doesn't really like owning or buying signature equipment.


This amplifier features four channels. However it is really not for channels but rather two channels with four different modes of operation. You basically have a clean and lead channel with four modes between those two channels. So your clean channel can get a crunch and then your lead channel can get a heavier lead. It's not really four channels because all shared EQ, so this is a little bit of a marketing switch for ENGL amplification. You have a bright switch that will brighten up the highs if you have at hiicker warmer guitar. You also have a contour switch that will shape the mid range a little bit better. And you also have a high low gain switch.

This is not Uber metal amplifier that ENGL makes but more the classic rock/ modern amplifier. It does have a lot of modern tweak- ability and features and the overall voicing and tone is more towards classic rock in modern tones but not modern metal tones if that makes sense.


If you get lucky to find one of these amplifier's then you're in good shape because they're very hard to find. If you do you find one then I'm not even sure what the going rate or price of them can be. But if you want the tone of this amplifier and you don't mind owning a signature amplifier you can just go with the Ritchie Blackmore signature amplifier instead.
Did you find this review helpful?yesno
»

Maxcreed's review (This content has been automatically translated from French)

ENGL E654 Fast Hand Motion Limited Edition
5
ENGL is a Fast Hand Motion, this amp is a limited release in ENGL at 97, it is actually a Richie Blackmore but with a golden facade (same for the grid on top!) And EL34 power to instead of 6L6!

EDIT: it is now equipped with 6L6GC Svetlana C logo, a switch Pentode / Triode switch and a 100/50 and a grid on the back instead of the plate for ventilation (j &#39;I still keep the plate)!

His name is Fast Hand Motion, but I know ENGL had also released a Slow Hand Motion is also equipped with 6L6 so if anyone knows the difference between a Slow Hand and Ritchie Blackmore, let me know!

So it&#39;s a 4 channel amp, very versatile, good construction, vinyl is good, the finish is neat.

Rather it is a rock amp but with a very good clean channel, nothing has been neglected.

It has only one eq for 4 channels, it bothers me personal but not too good a second eq could be a little more practice but I ask not bad because it&#39;s a great amp!

The knobs are nice old-school, it has a friendly face with golden façade! In short it&#39;s really the style I think!

Using fairly simple, you just need to get two masters, the first time you use it is surprising because it is not something very common, but the use it is quite handy!

The knobs are fairly progressive, it is happiness!

One branch, and it sounds at once, whatever the setting, knowing that just five it gives a reasonably good result!

EDIT: the switch and the triode 100/50w are very easy to use (great precision that say so) and very effective!

So I play with a Gibson SG and a Fender Start!

First, the amp is very responsive to the kind of scrapes that he branch, on the Start have a Paf pro in acute and well I can assure you that it is not at all, but then not all the same its the 498T with the SG!

The clear channel: top marmoset, very precise, dynamic at will, can be both slamming or hot, it&#39;s good not a Fender but it is very clear and sharp, like a lot!
It is still the best part of a clean on which I could play! In short it will sound funky slamming top marmoset in his warm, round jazz perfect for jazz and walks (even if it is not really built for the Jazz in the beginning, because very sharp!)!

Crunch channel: ben really crunch it up when the "clean" past noon, a rather light crunch, personal I expected a little more crunch but hey! It can also serve as clean but with more gniak the clean normal! This is a good channel too, even if it&#39;s not my favorite!

Lead channel: top marmoset, a touch of madness, it will crunch bluesymiam-miamcroissantchaud nice for blues & Co (I prefer to the crunch channel, but hey I did not use enough perhaps!) To the very good big rock power through the AC / DC, The Darkness, delirium or other grungy-rock! Like the rest of the amp, the channel still has the key "edge", the grain is very straight ENGL, accurate, but so what grain my children, what grain !!!!! Yum! It sounds like a 800 but different, more upright and sharp!

EDIT: for cons, severe lack of bass and body, the amp is great because very nasty and goes well in the mega mix!

Heavy Lead channel: Ben is like the lead with a grain a bit more smooth because there is more gain for my taste I was expecting a bit more gain yet but ... where you enter in the register of the large rock and even heavy metal (even if the amp is totally geared more rock than heavy metal!)! It changes depending on the settings though! Just one thing, I find the grain of spring a little less saturated than the lead channel, this channel deposit especially in single player! EDIT: in group play situation, it is better to play on the channel lead normal, because this channel appears less because the grain is a bit too smooth, I used it mainly to play lead and kept the rhythm for the large channel lead!

Otherwise, be aware that the eq moderately well on the sound of the amp on low and some medium range, treble and presence are against, mega-efficient, fun thing, the amp sounds regardless of the setting drooling and almost never does, it actually has a very good accuracy!

Another thing, the grain and tone of the amp are quite right, the German side that emerges! Personal I like because it is sending the puree whether clean or saturated, but it may not please everyone! EDIT: it was a bit tired because of lack of body and lower the amp but it is true that it was a beautiful creature!

EDIT: The Triode switch brings a little more roundness and warmth to the sound while the switch to switch to 50w also fulfilled its function very well (note that in 50W sound is a little less smooth and exciting than 100w !)

Vala! A small 8 and go my kiki, because of the lack of bass (not very effective palm mute)!

Well then, I guess the original price of the amp should be around the price of Ritchie Blackmore, that is to say little more expensive than the Marshall for a much higher quality and even some Marshall Mesa !

I played on the JCM2000 of any kind, I have owned a JCM800 2205 and I tried the JCM900 and Mesa Rectifier and even though the ENGL amp is the most natural and is also one that respects the more the personality of each guitar is the most accurate!

As against the side of a VHT CL100 is a bit noisy as the VHT is also a super silly! The advantage of the ENGL is its versatility but the CL is still on top in overall quality!

Vala! Overall I am super happy because it feels a little high-end side at the quality of its sound, there is no compromise all channels dévelopent&#39;s a very high quality, it&#39;s really a super beast one of the best, if not the best amp I&#39;ve played on Lèque, counting the Mesa, the VHT and Soldano HR100 (I&#39;ve tried it once and I was well behind the hole, but hey c &#39;is the same price too)!

Vala!
Did you find this review helpful?yesno
»