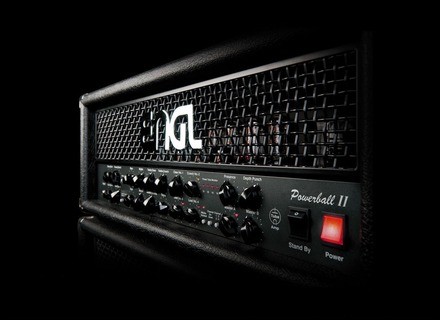 ENGL E645II Powerball 2 Head
4
I still remember when the original Powerball came out. It was like a Dual Rectifier on steroids. Still, it had its fair share of flaws and eventually I sold mine for something with less shortcomings. II leaves where the last Powerball left off. It offers 4 channels, 6L6 tubes, bottom controls, mid boost, depth, a full range of EQ, and a lot of other goodies. The only feature missing is midi control which I really really wanted. Some of the other ENGL amps have this and I find it very useful.

This is a hard amp to get the hang of and it clearly not for the less is more crowd. This is a real member of the channel switching knob turning family. Personally I like both schools of thought, and I'm always open to finding a multi channel amp that can sound good. The ENGL manual is great and the way they do things reminds me of Mesa and their manuals. Very useful. There are a lot of trial and error things on this amp like the depth control and the bottom controls. You can get a lot of different uses out of it.

The clean channel is much improved. I usually use a les paul or super strat of some sort and I must say the cleans are not as sterile as they were on the older Powerball. Yeah they still have that glassy feel to them and they are really fendery too. Just not as bland. The crunch channel is possibly the weakest channel, trying to do the mid gain thing but honestly not sounding like it wants to. The 2 lead channels are where the good stuff is. Just set them to taste and use them in conjunction with channel 1 and you will be good. Obviously this is an amp for heavy heavy metal and the like.

I really like this version better than the last, although in my opinion there are still better ENGL amps. I think it comes down to taste. There's a steep learning curve with the Powerball as well as most other amps like it, and you should be prepared to spend at least 2 weeks learning what effects all the knobs have on sculpting the tone.
Did you find this review helpful?yesno
»

You have a presence and death Punch control knobs and allow you to tailoring power amp section much better. You have two bottoms sound switches for the lead channels which allows you to get more low and tone. You also have a mid range boost switch that affects all of the four channels. In addition you get an effects loop on the backside of the amplifier and LED indicators that allow you to know how your power tubes are working and if they are working correctly. In addition to all of this you also get a noise gate which allows you to dumb down some of the hum and noise this high gain amplifier puts out.

This is a insanely huge saturated high gain amplifier. The clean and crunch channels are pretty good on their own matter. But this amplifier lives in the high gain territory. The clean is a pretty good clean but you really don't buy this amplifier for the clean channel. The crunch is a good crunch for classic rock sounds and types of tones. The lead one channel is more for rhythmic channel because of its thick distortion and it's scooped EQ. Second channel is more of a higher gain channel and is more suitable for lead line playing and soloing.


I would recommend this amp to someone who is more into drop tuning and metal sounding guitars. This is for the modern metal type player and not really for the Fender blues or Vox amplifier type guitar player. The voicings a very German sounding, so if you like that then you're in business with his amp but if you don't then you will probably sell this and quicker than you actually paid for it.

ENGL E645II Powerball 2 Head
4
The Powerball II is the newly revised Powerball. The features are all pretty much the same as the last Powerball, but the inside is where things got a bit different. It's still a quasi-four channel amplifier with an effects loop, noise gate and various mini switches to adjust the sound to your liking. Aside from the cosmetics and some different labels, the outside really hasn't changed that much.

This amp isn't as versatile as the other amps in the ENGL line. Where as the other amps offer things like multiple effects loops, MIDI capability, preamp/line outs and other things like that, the Powerball II mainly focuses on keeping everything on the front panel and allowing you to work on dialing in a perfect tone rather than messing around with setting everything up. This amp has the same problem as the last one, however -- the lack of fully independent channels. It's a four channel amp, but most of the controls are shared. I really wish they made this amp a true four channel amp, but some will disagree.

This amp sounds a lot better than the last one. There is still tons of gain, and it's still one brutal monster of an amp. However, it seems to record better and not be as ridiculously woofy sounding. I think the gate works a bit better than the last one, but this is going from memory. The clean is decent, and mid gain tones aren't bad, but where this amp really shines is the high gain territory. It's like a much tighter and more focused Recto or Cobra.

If you're a fan of the Powerball series, I recommend getting this amp over the last one. It's a much better sounding amp than the last Powerball, in my opinion. That said, I still tend to recommend either the Savage 120, SE or Invader over this one. I find them to be a bit more versatile and better sounding, but that's going on my tastes. This amp is definitely no slouch, that's for sure.

badgrat's review (This content has been automatically translated from French)" and counting!"

ENGL E645II Powerball 2 Head
5
The features are basically identical to the first version. Only things that change are:
- A gain per channel (4)
- On channels 3 and 4, the focus knob is replaced by a mid boost
- The effects loop is now switchable via foot-switch (very well that!)
- The color of the head

The config is always simple, like the manual. We need to tamper well determine the effect of knobs and "interaction" they have them. But it is simple compared to a Mark V)

is always an amp for playing metal although it is always possible to find a set style, but for other well ...
I will not dwell on all channels and their sounds but I will look for the BP II to BP I

The big difference is an overall sound (basic voicing or if you prefer) darker. The sound is more focused low mids. BUT I find the treble knobs and more effective presence on the DB I allowing him to lighten his voice to resemble, if desired, to the PB I.
So the sound of the PB I is still there but with different settings. So you must get reacquainted with the amp. Or rather, get to know because this is not the same amp. What makes the PB II is more a dose of low medium and medium plus that can carve well with the equalizer. So, it's like a PB I "doped")).
Grain, although similar, is a little more "raw" versus "sizzling" on the version I. I like!
I'm not disappointed to small revival in the grain. That is excellent!
The big thing is that I love the effects loop switchable via switch. Ca, it was missing on the other. It's very convenient when you use such a delay pedal that is looped and is located on the front of the stage and your amp is 10m behind. It's been a good length of cable and its potential loss. Instead of the avian "loss" of his times, you do that when you engage the effects loop. And voila! Ben

I've had it three months. I also have the PB I. I love both. But given that the BP II is also known to recreate the sounds of the PB I ... Only one can suffice. Except that I need to lug my amp in rehearsal, P