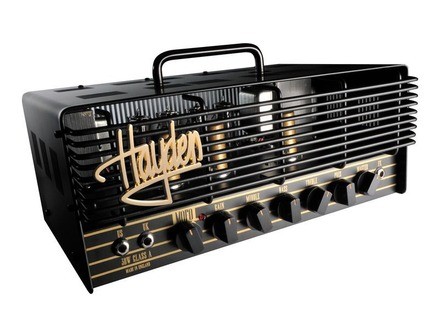 All user reviews for the Hayden MoFo 30 Head

use very simplistic sound is simply whatever a little searching I found that the bass is very present and the knob is not used much, but he can be a hassle to me not to be taken literally
MOFO using the boost switch that is usable but is very effective against by using it with an external attenuator adds grain even in light damage without attenuator does not distort the sound so its function is very usable especially appriorie I live is not tested but we will have an extension or another switch or as little cable.
I had no manual, but it is findable on the internet and anyway we do not need.

Basically you have what I thought the ideal that is lightweight (easily transportable thanks to its bag) powerful 30 Watt all-tube playable at home thanks to its position and 2 Watt Boost for Live because I think this essential and so good option especially if its not distort the
In addition, the fact of having a single channel we say that the sound will work better and for a purist like me, ie using only one channel clear and well-trained to take pedals like a TS9 one fuzz tremolo reverb delay and chorus.
All these combination compatible sound and everything works except the sound of the amp does not suit me against the boost by enclanché I think the color and warmth arrives
To explain everything I'd videos via youtube: www.youtube.com/magixfingers91100
Can I change the lamps in the hope that they were very tired or very bad qualities are all so it will not hurt the amp and putting lamps best quality while this will make the sound will be much better
Besides, if someone want to advise on the selection of lamps you be welcomed.
Magix fingers

ChrisR.'s review (This content has been automatically translated from French)" Surprising!"

A matching 1x12 cabinet is available - made in China (with Eminence.speaker)

The manual did not have much use but may help some on the choice del'impédance or plug stereo FX Loop and deal vaguely guitar playing on a mono channel nice but nothing more.

The sound is pretty good game to come a bit faster even incisive aggressive in the treble eq is quite effective, so according to his guitar style and we manage to pull something pretty good!

Unless you're not a fan of class A, and want more channels with full EQ opportunities we are not here on the game but the former re-visited if I may say, by adding an FX Loop and knob Boost "Mofo" but everyone has translated "Motherfucker" to gain more! YEAAAHHH!

The clarity is good for jazz and funk - I prefer the clean sounds (it does 70s crunch, but I don't).

This amp and others eg Orange TT) lack headroom so it will fit the Master to clean the property has clean and high volume necessarily especially especially with humbuckers).

I put the gain at the bottom for a clean / crunch with my strat way Jimi and I did all the knobs of the guitar and when I want more I open the jar of my guitar, and to saturate the Boost j'enclenche MOFO to enter the world of hyper saturated fat Boosted for rhythm or leads I stick my big Majik Box Rocket Fuel!

Mode Mofo we will draw sheet with simple mic pop, blues, rock, passing over the hardest to Purple, Queen up the old or the Maiden Kotzen etc ... without problems.
With double the same but with a bigger sound but it has come to the big Hard Rock Metal without going to the most extreme ...
It is really between Marshall and orange sound really British is the RDV!

The U.S. entry more bass and a tad more gain than the UK side it sounds good not really British, but U.S. still rather caricatured U.S.! Not my thing!

Unbeatable value for money bundle 545 euros in the digital village in all € 580 with a cable jack for stereo Y effects loop and a speaker cable Monster Cable!

What I like most his British super sound its robust all-metal chassis cache of golden lamps that matched the logo vamp!

And especially the stealth switch placed under the head to pass it in effective 2W HYPER slight loss in the upper normal for mitigation but nothing serious for the house is really hell!
Yes it sounds a low volume!
THE TT Orange is very good but far more limited! done better ...?

What I liked least, the lack of Burnes Edu too sour and low quality of the sound of Ruby 12AX7 preamp tubes AC5 HG changed to a ground tung ECC803gold in V1 and V2 in the JJ ECC83 and IP (in phase) Ruby's a JJ ECC83 AU7 a balanced sound has more body and boot bouboule and EQ and a more balanced and less harsh treble.

CSWS ago when we change came jack UK / US ah yes avoid plugging and unplugging (usually on all the amps) taking FX Loop when the receiver is turned on at home it really does not.