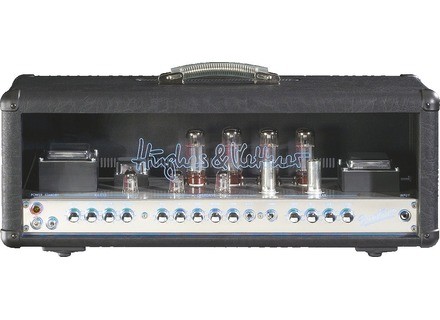 Hughes & Kettner Duotone Head
5
This a German company who designs high quality guitar amps for touring musicians and the average consumer. They guitar amps that range from just a few hundred dollars to several thousand. The have a flagship amplifier and this is it. The Trimap from Hughes and Kettner.

This is the amp that is favored by Tommy Thayer. Tommy is best known for his contribution to the band Kiss but he also helped to form the band Black N Blue in the early 80's. This was a hair metal ban that was based out of Portland Oregon.

This amp is the little brother to the Triamp from Hughes and Kettner. This is a two channel amp with an extra boost option. You get a solid clean tone for one channel and even a good crunch in this channel. Next you have a distortion channel which has a option to boost for even more sustain and gain.

At new these amps come in right around $2700. Not a bad price for a boutique amp with multiple channels. I have seen this amp new at some other online retailers for $2300. So they can be had pretty good for boutique prices. If you are classic rock guy and want the vintage tone with modern twists then this is a great amp to achieve that sound.

luke 34's review (This content has been automatically translated from French)

The amp is Designed for simple Manir
2 channels with effective sound equalization is easily faonnable wish without the fuss
there is no need for manual as long as it is known to use an amp ....
Note that the effect loop is very efficaceavec Regleg a balance "weet and dry" handy

This amp is perfect for those who seek a high gain amp that sounds almost perfect as the clean sounds on the saturated '
Note that unlike other models "and huggues kettner" the sound is warm and not at all synthetic heat it the old marshall plexi and a superb dynamic sound modern "natural" nothing to do with the triamp example I also owned ....
sounds clear s'aparente best fender plus a fairly modern color that goes well with modulation effects such as chorus flanger etc. .... a touch of delay over the beautiful melodies and greetings in arpeggios or the funky riffs slamming good
distos for the distortion is not tasteless trash metal, but the true saturated granular and how much momentum !!!!! this amp is a lot to think about marshall anniversary with a much more advantageous disto more fluid and very powerful is going through a little good old rock 'n' roll's Chuck Berry was furious, beatles, even the "stones" to saturation at the ac / dc aerosmith scorpions zp led to his style metal deftones evanescence sum41 and the whole gang .... on the other hand is a bit short for very sustained distortion (like pantera and consors), however, what is the dynamic dynamite!! short as of happiness ....

I've had a year or so
+ what I love is the capacity to rep ^ roduire natural sounds like the real Marshall knew the time of making the sound clear and the top Stur superb dynamics and especially I do not say enough
and more beautiful it is when the dish turned a blue light surrounds the logo "hughes" and disperses a Lumire my faith very nice!
I had a lot of hugger or model is superior in my opinion as the "huggues triamp"
all after the marshall plexi except the 6100 anniversary which is on a par with .... However, a sound less "present" much better as the "engl" savage that I find bland in the color of his but who has more to gain distos but not only the quality rivera bonehead "Steve Lukather" is superior but good is not the same price either
The value for money is good but not miraculous, because the beast cost alone of around 2200 euros it is certainly not given but the quality is l. ..
If I had to redo much of Quej remake that choice even though now I turn to a rack concept (VHT Two Ninety Two with CAE + 3SE changes and lexicom 81 cfm)