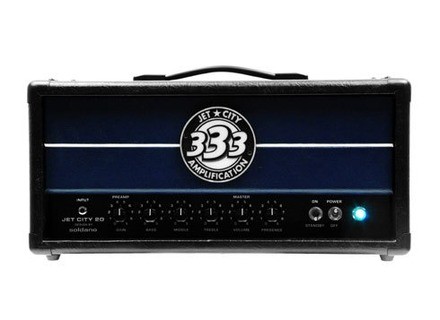 Jet City Amplification JCA20H
4
Jet City Amplification has been a big hit on the amp market in recent years. They have gotten a good sounding amp at unbelievably low prices. I do believe they are made overseas and that does keep the prices low and for this manufacturer it is all about the money and not the quality. These amps are not that great in quality. They do sound pretty good but they will not hold up to any regular use and abuse taking to clubs and gigging night after night.

These amps are essentially a cheaper version of the Soldano amps. It actually is the fellas over at Soldano who design the amps. So you know you are going to get a very good sounding amp.

This amp is aone of the best amps that Jet City makes. This have a great British flavor of distortion behind it. This is a single channel amp which does have a good clean tone when you roll down the gain on the preamp section or your guitar's volume pot. But the best part about this amp is the thick juicy distortion tone that you get out of the preamp gain being maxed out. There is a very familiar tone and voicing there that sounds a lot like an SLO.

At new these amps come in at around $249, which is a heck of a good price for this amp. Other than Blackstar and maybe a couple other manufacturers there isn't anyone who can get this good of an amp at this low of a new price. Peavey does have some decent amps but nothing this low. I would recommend this amp to anyone who need s good 20 watt head and doesn't want to spend more than a normal distortion or overdrive pedal prices.
Did you find this review helpful?yesno
»

It was simple and easy, very simple TMB lay out. Very much a plug and play amp. So if you like buttons and knobs this might not be for you.

I played it through two guitars. A PRS SE Single-Cut and a Fender Buddy Guy Stratocaster. I plugged in the PRS first. Set everything to noon (except the master which was about 11’oclock). Instant Classic Rock grind ala AC/DC. It was very bright and present with lots of clarity. I was very impressed. I inched up the gain to about 3’oclock. Where it started getting into metal territory (don’t expect super saturated tones, when I say metal I mean Stuff like Metallica, Megadeth, and Iron Maiden). After about 4’clock on the gain it became muddy and undefined, but it still did a great job of getting some heavy tones and could really benefit from a boost like a Tubscreamer or SD-1. I played around some more with the EQ and found it to be very responsive all the way through the sweep of the pot on the EQ. with the middle and treble upped and the bass brought down a little it did a great Van Halen impression and I was also able to coax some great fluid lead tones ala Jerry Cantrell out of it. I then plugged in the Strat and proceeded to start all over again. With the Strat I found it to be much too bright for my taste. Although I was able to get some nice blues tones with the neck pickup. It did some nice Clapton impressions with the gain around 11 o’clock. I found that it didn’t do any clean tones well even with the strat and the mids scooped a little. It wasn’t horrible cleans, usable maybe but definitely not where it shone its best. I wouldn’t suggest this amp for guys playing any big shows because even with the master at 11’oclock it was barely above loud talking

Overall I highly recommend this amp for guys looking for a small (let me stress. Very small) gigging amp or bedroom practice and I am sure that with a tube change and a nice cab it’d be a great recording amp. The JCA20H is listed on musiciansfriend.com for $349.00 which I think is a smokin’ deal for such a great little amp. If you are looking for great classic rock up through 80s thrash (with a boost) this is your amp. Overall I give this an 8/10

Jet City Amplification JCA20H
4
Seen again and again, I will not relister characteristics of the head.

Top quality, the amplifier exudes strength. Exemplary finish, although I find particularly ugly logo. Given the quality of the sound, they readily pass this detail.

Setup can not be easier; is connected and playing, it is clearly the aim of this amp.

His only fault is not having loop. Past 5 gain, the use of reverb and delays is a bit brouillone, which is also quite logical. Its unique vocation out gross and punchy sound, and he excels in this area. on the other hand, versatility is not by appointment. So think carefully before acquiring this amp to use that will be designed.

The equation 3 bands used to refine the sound but not the sculpt. With a strat, the amp has a lot of presence; is drilled without any problems in the mix. In fact, for me, the presence knob is still in its first quarter. I imagine much more useful for guitars with humbuckers.

Gain knob between 1 and 2 and volume amp background, it leaves a clean sound quite nice crunch, a little way "under the bridge". He will be missed by a little against sound reserve for group play in a really comfortable in this config.

Gain knob at 3-4, the amp really excels. Crados of the Strokes or Frusciante crunch it out with a potato Hell, you can refine it if necessary with the guitar volume. With a strat, this is for me the best sound of this amp draw.

I use it for 4 years. I have since acquired another 2 channel amp with effects loop, much more versatile and better suits my style of play

So, each time I tell myself that I'll sell the Jet city, and every time I send myself a nice little riff over and I said "wow when even I can not separate myself."

If you are looking for a dedicated amp or distortion crunch a filthy use for hard rock guts, it's really a great choice. Others, attention to understand your expectations before you buy.

Use "could not be more simple!"
We light, heat is allowed some time and it turns on standby ... to get a good overdrive sound.

This amp is designed to play rock, punk rock, hard rock ...
No metal without TS style pedal, but there is still a good headroom.
I "boostais" sometimes with a MXR ZW OD, and it was really good. A small amount of additional gain. Note that this amp, this OD going better than others I've owned (HT5, Tiny Terror, for example). The report was cleaner, more accurate ...
For 20w, it is still relatively strong. And like many, the quality of the overdrive is felt when passing the midi/13h gain saturation ... with you completely ... I loved it!
It is still difficult to obtain "true" clean with, or when, or 1.5 to the master, or playing the knob on the guitar.
For cons, I have not tried with microphones simple (I did not during this time unfortunately).
Anyway, you do not buy this kind of amp for the clean at high volume.

I did not find super versatile because of the clean, but it should still be in a lot of people, especially as the setting knobs are really effective.

I used it 6 or 8 months.
I bought it almost to its output. Because everyone was talking about, I wanted to try it ... but my house!
I thoroughly enjoyed this popping sound, round and full.
I regretted in the long absence of an effect loop, and a little reverb. But hey, at first, we know by buying it ... but I wanted to report it because it can be annoying when you're used to!
On some series, the blue LED operating slammed pretty quickly! This did not happen to mine during his stay with me!

I am sorry to be separated, but we can not keep everything at home.
I almost buy it back when liquidating its stock Thomann (189 and 195 euros!) Last spring ... time to decide, there were more!

Ah yes, I forgot! Saturation of this quality at this price ... it's almost given!

Did you find this review helpful?yesno
»
Read the 5 user reviews on the Jet City Amplification JCA20H »

Listen to the 10 audio files about Jet City Amplification JCA20H »