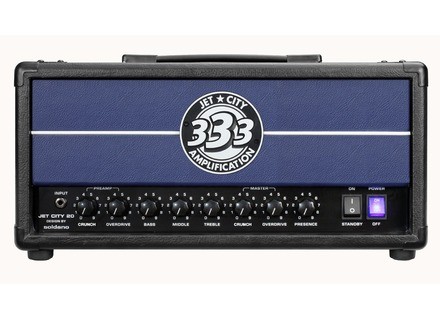 racerevlon's review"Soldano tone that won't blow down the walls (much)."

Jet City Amplification JCA22H
5
The JCA22H is an all-tube 2-channel 20-watt head with a tube effects loop. When the original JCA20H came out it was extremely well-received and provided awesome Soldano-style tone at lower output settings. Everyone had the same suggestion though: add the world-famous Soldano drive channel. So, in the JCA22H they did just that. Now you have the "Normal" channel from the JCA20H and the trademark Soldano overdrive circuit on the "Overdrive" channel. This can take you from nice warm cleans to mega-grind Soldano tone. The amp uses 5 12AX7 preamp tubes and two EL84 power tubes to deliver the tone. One of the 12AX7 tubes is used for the serial, buffered effects loop. The others are used to deliver up layer upon layer of gorgeous Soldano tones through a Solid-State rectifier. The head has independent gain controls for each channel, a shared EQ section with Bass, Middle, Treble, and Presence controls, and independent channel master volumes. The back panel of the amp has the connections for the mentioned tube-buffered serial effects loop, the foot switch connection, and speaker outputs for 16, 8, and 4 ohm outputs, providing a great deal of flexibility for feeding different speaker configurations. The only improvement I could see being made to this amp would be to have independent EQ for each channel, but there's not really enough real estate in the current form factor.

The price-to-value ratio of this head is unbelievable. This amp would be worth it at twice the price. I've played club shows with this head and a Jet City JCA24S 2 x 12 (review to follow) and received multiple compliments about the quality of my tone. At a mere twenty-one pounds this head is extremely well-suited to driving a 1 x 12 or 2 x 12 for smaller club gigs, but has no problem driving a 4 x 12 to sufficient volumes to cover just about any stage. Miked up, you can play any venue with the JCA22H and any cabinet or a D.I. interface. Without sounding too over-gushing, I've found it nearly impossible to get a bad tone out of this head. For the record, I cannot for the life of me understand why people have these amplifiers modded. This amp is designed and sounds brilliant as is and in my opinion requires no modifications. If you can't get a good sound out of this head, I dare say it's probably not the head unless there is something mechanically wrong with the head or there's a bad tube.

Using a Dimarzio Super 3-equipped super-strat I was able to play an entire set with only the included foot switch to switch channels when I needed a warm, clean tone. Beyond that, it was full-tilt signature Soldano overdrive tone made slightly "greasier" (that's how I describe EL84 power tube overdrive) with the EL84 instead of 6L6 power valves. The JCA22H takes every guitar I've every plugged into it and produces heavenly tone. Everything from strats with low-output pickups, to mid-output Les Pauls, to high-output super-strats, the JCA22H makes each one sing with its own individual voice. The amp is extremely articulate for a low-power amp with a shared EQ, which incidentally does not negatively impact the amp.

For smaller club gigs, this is the perfect amp. Paired with a 1 x 12 or a 2 x 12 this head delivers the signature Soldano tone without the burden of having to use an attenuator or sacrifice your tone by turning down your monster 100-watt head. The tones are crisp and clean, and the amp can drive a 4 x 12 as well as anything else. If anything happened to my JCA22H, I would QUICKLY replace it without hesitation.

Jet City Amplification JCA22H
4
The Jet City JCA22h is an excellent response to player needs. The original JCA20h offered wonderful value by taking soldano designed circuits and sourcing less expensive components to build them. The JCA22h adds a second channel that can be foot switched between. The two channels share a global EQ and presence control but have separate preamp gain controls as well as separate master volumes. A Tube buffered effects loop is present. A duo of el84's power the amp and give it a great tone. I must say, I've been a fan of the "333" branding on the grill of the amp. The sounds make it easy to forgive the aesthetics though.

The additional channel makes it easy to set up rhythm and lead sounds independent of one another. The responsiveness of the amp to your guitar's volume makes it even more versatile. You could easily go from very clean sounds to various degrees of gain without much footwork involved. The construction seems plenty solid. I've never had the chance to gig the Jet City but it seems plenty loud enough for that sort of environment.

I played through the Jet City JCA22h with a Gibson Tweedy SG. Mesa 4x12. No effects.

The cleans are very pretty. The amp could benefit from time based effects (reverb and delay) but overall the sounds are plenty useable, leaps and bounds greater than the pre-2010 rectifier amps for example. The mid gain sounds are very soldano-like. Much like the Astroverb I played previously, the amp can cop Thin Lizzy gain tones perfectly. The high gain sounds are no slouch but one might feel inclined to boost the amp. I personally feel the amp is fully capable for heavier styles, but the amp is lacking the low end that some metal players might expect.

The Jet City JCA22h is a greatly versatile, inexpensive amp that offers sounds that you typically would not see from an amp in the sub $1000 price point. The additional channel makes the amp more gig-friendly. My only complaint is the look of the amp, but the sound quality outweigh this shortcoming greatly. If you can, try out the soldano Astroverb-- A used model can be had for a few hundred more than the Jet city and might better satisfy those in the market for a low wattage head.