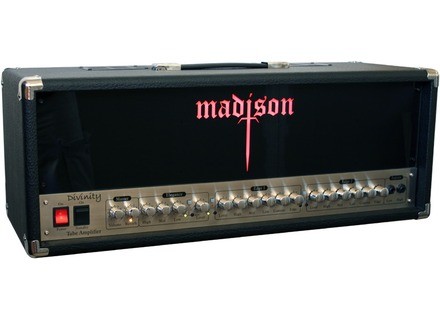 Subjective approach:
When you approach the head. It is "built like a tank" looks like our friends amricains. It's heavy, it's big and massive. Not compromised by installing aluminum one place or another ...

It is the only name it goes.

The finish is more acceptable and can boast of being made out to the states! 3 channels and an effects loop with true a basic footswitch supplied, it's really nothing honnte default rvolutionner.

Add that it is possible to choose the lamps initially Arequipa gear option (EL34 original).

[6] for three channels even if basic in its design. It lacks a lot of things gets up at a Koch Powertone or a Genz-Benz El Diablo, rich in options, but is l.

The setup is clear and the grip is IMMEDIATE.

This head, however, need as many amps lamp, a work rglage conscquent until it found exactly what you want.

The clean is plutt tense and a little stick. However, according to the instrument and rglages. It comes out a clean usable even if not nominally "good".

The real strength of this head has the crunch channel and saturation ...

The crunch, it directly attacks the registers gains little rock ds levs. Going up the gain, the head is biting and you get to the sounds trs type with a tendency MESA big sound.

Saturation is madness. The head appears sharp and grain is furious fun. The destination of this channel is Premire the drivers of mtal, hardcore, grind, from dark, goth ... in this light but always violent.

[6] Do not imagine playing anything else with this head. It is essentially intended use brutal. But he cel Confre a personality and says it will not be a surprise if I told you that this is a little head "rectify the poor" in many states and team of "good" groups.

Too little known in Europe. This head does dgote hardly. Except in certain groups of experts. It's a real "good deal" if you play exclusively on the craps!

One critical. The service before and APRS sale is not always rgulier. Even if there is a tendency of making our answer all expectations.

[8] Because the head is a bargain when you compare the price / performance ratio. It will allow many young groups to be hairy and connatre polyte endorsement of the manufacturer is going in the right direction.