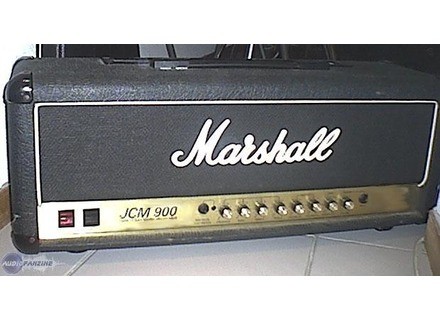 in fact c is a single channel with 2 Separate volume (or switch to) the interest of the latter is boosted volume for lead, c is very convenient if anything was reported, c is ultra simple and versatile enough levels of colors that can be obtained
see more

this amp is really built for rock and heavey (gain range from 0 to 20) ...
j says, the first gain (preamp volume called) ranges from 0 to 10 and works with 12ax7 (v1 in it seems) when the 2nd gain (called sensivity gain) ranges from 10 to 20 that will drive circuit (tube type screamer).
when we play a mix gains with values ​​differentez, we find all the legendary color of Marchoul. jtm 45 in the slp j usqu at 800 supercharged.
I possess also a jmp 2203, it almost sounds like the mojo and corones less, but it is in this line, nothing to do with the dual reverb or repugnents slx (whatever the slx is similar except for a lamp instead circuit and in 6550 instead of el34 put the sound is very byzarement chemical) short c is the worthy heir of 2203.
the only problem is that c must play strong enough to do grunt in triode (50 watts) from 6 to the master volume with the preamp (lamp) on 4 and 14 c of boost is very super lead ( ac dc let there be rock).
equa l is rather good, but I prefer to put everything at noon eq mxr kerry used a king in the loop.
moin quickly that it compresses a jmp that one or 800, it pulls 100watts serious, it is very right byzarement.
but what makes a great amp c is the cab you he stuck with a 4x12 marshall 70's mounted celestion black back (hard to find, I took a long time) it 's great the sound is very close to that of slash use your illusion of a good alternative to 2555slash that I have too, I know whereof I speak, with green back c is very vintage and hot, with v30 c is the sound of puppet master and van halen with a Hiwatt mounted fades and c strat is very hendix.

great amp very subtle finally the level of earnings, the only problem is that c must be strong enough to play that it can express itself as it deserves, I sound engineer and collector and I'm a fan of Marchoul, this one put on my ass a surprise.
and it must be pasted take good baffle.il well as the effect on the front
in line with the jcm slash, JCM800 slx and a good alternative to slash example.
a j yes I forgot he did that was produced two years (1990-1992), thus becoming collector, I called the'll jcm 809 mkIII because it suffers from the bad reputation of the dual reverb, c is a JCM 800 boosted with different voicing.
here is my opinion and this reflects differ slightly from your c after all, is a story of sensations.
But I like

onelittlejog's review (This content has been automatically translated from French)

The configuration is very simple
1 guitar input, the switch to control the channel a or b
behind it plugs into a cabinet or other 1922,1936,1960 etc ... (personal Sovtek) and it rolls
the legendary Marshall grain is to go
like any tube amp, the head weighs a dead donkey, but much more practical than a combo.

is simple and very effectively
One can certainly dig the bass, midrange and treble but the sound is there and the change in frequency small, they're not alone I hate to take the head with all this.

pop, rock, hardcore, metal, this head is able to do everything
its weak point remains the clear sound of most of the marshall
its strong point, rock, blues with sounds fat and drooling at will (thank you Jim)
I would put 9 because I regret the lack of reverb (which I love so much in Marsall)

I use it for 3.4 years now and is happy that the
this choice I would do again as the know-how, reliability and sound on both this mythical album is to go

lolodoc's review (This content has been automatically translated from French)" I love it!"

it is the evolution of head jcm 800 mk2 2203 and in consort ..... even better because there a loop effect ...
amp is a "reference" when looking for the famous marshall sound .....
should not be confused with the JCM 900 SLX Newest: because this is not the same amps. (besides it to sound better than the JCM 900 SLX with my personal taste ..).
the only small criticism I can make it ... it is the lack of reverb ... for use with a multi-effects in fxloop you tell me that this is not very important in the end ... but hey, with the experience I buy a second property in fact ... well if I found in a secondhand! and it is not won because this amp is very very rare ... (It has been made that two years I think ..).
its just become a collector .... some say it is!
collector where that is rare ca ... "sounds"!