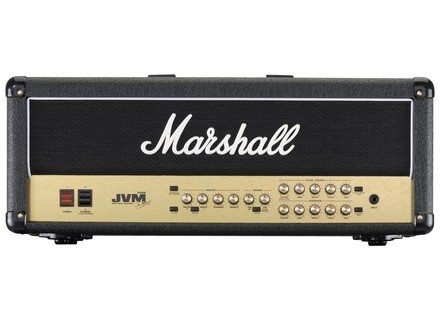 View all offers for Marshall JVM205H »

Marshall JVM205H
4
This is the same amp as the JVM 210h but just with half the power rating. This one will have two less power tubes and comes in at a rating of 50 watts.

This is a fun amp to play. Not too much to get confused with and not too much to get overwhelming that would distract you from playing the amp. At new these amps come in at around $1400 which is a bit more than the Marshall JCM2000.

I would recommend this to anyone who wants to get a good sounding Marshall amp but doesn't want to get a Plexi and a JCM 800 or JCM2000. You can get almost as close as you would get to those tones but in just one amp.
Did you find this review helpful?yesno
»

oliverdude's review (This content has been automatically translated from French)

Marshall JVM205H
4
Hi all
Head all tube 50 watts with two EL34 then to amplify and five ECC83 preamp for.
Ultra easy to use and no redundancy as the channel model 410 with too many possibilities to not too many buttons and too powerful.
To top it off, your settings are saved even without MIDI just provided with the pedals. If you want MIDI there, it will buy a pedal. Effects loop with a switch on / off front panel and a volume control input, an insert point on the amp bypassing the preamp and an amp simulator XLR output for a record deal or a console !

I start right away with the negative as it gets rid of it! There are two digital reverbs a per channel and are so-so, those springs were not terrible, but there ... Then switch on the front are of poor quality below the level of quality Marshall. A force to use one day I'll take one in the face! Fortunately the pedals is very caustaud and we do everything with.
Button to finish the "resonance" which must benefit the serious and really there to do good because you have to have sharp ears to hear the action.
That's it for the sides is more sound and wide range of applications.
Use of this head is very simple, the manual is also in French.

3 modes per channel, green, yellow and red or 6 sounds preamp (12 on 4-channel model of delusion!) You can still play with this amp because in addition it sounds great.
A green channel mode is very clear and beautiful crystal on a Start and already a little blues on the microphones of a serious les paul.
Is in orange crunch, blues country blues solos. The channel is still the least successful for me.
Fashion red is supposed to sound like the JCM 800 but rather to the JTM45 that we look for those who have already played on these great old amps must reach heights of decibels to ring so that here it is now.
Channel 2 Green Mode found some sound mode except for a red channel with the strongest gain was the sound AC / DC without worry, especially with the grain immediately recognizable, not copy or likeness that's it!
Orange the best mode of the head, there was the history of rock on a channel, just turn the volume or gain to the Van Halen, Iron Maiden and all we have heard in years 80 / 90. The great Marshall distortion is there and it hurts so much is good, there must be strong enough to make it sound but with 50 watts while bathing is accurate and it does not dégeule.
Finally the last mode where it burns red, ideal for solos in fact, difficult to master even if the margin is correct feedback. It's good for the trash with équalo well cut can be made without forcing the bulk metal. I tried with a BC Rich granted Do I have to have some Kerry King in my basement!

Here I have this head with a 4x12 AV 160 with Celestion Vintage 30 for 15 days and I am very happy. I have a Gibson Les Paul and a Jackson Soloist Archtop someone lent me a stratum for listening! In addition the head is not cheap (except in France!) Bought 760 euros in England (live strong euro!). Thank you because with the Marshall JCM 2000 was not!

FAiRLiGHT's review (This content has been automatically translated from French)

The configuration is simple, we rule, we play, we did not spend his time on set or on the record.

To navigate between the modes of the 2 channels, you can do so either on the front panel or by footswitch, simply press the Mode button to switch to green to orange then red then back to AC Green.
On the channel clean / crunch, green corresponds to a classic clean sound, the orange to a more style and red plexi/JTM45 JCM 800 (yum)
The OD channel, green is something about the clean sound of red, orange (my favorite) add gain to the green mode and the red adds a layer to pull the heavy sounds

I said that all the buttons in front are assignable footwitch, which is handy especially given the short time we put in the program, it is quite possible to reprogram its full footswitch between 2 pieces

The only downside for me on the presets, they only take into account that the switches in the facade but no equalizer or gain / volume of the channel, for example, so if you switch from one channel to another that does is not annoying but only if you change the channel mode where AC becomes a bit

I dreamed of having a 1959 and a JCM 800 and this amp together with the brilliance (and especially it downright cheap: p)
The clean is much hotter than j'pensais especially with an LP, personally, I play a Gibson Slash on Appetite and this amp is a real happiness, no harm to find the sounds of guns but also AC / DC & cie.
on the other hand for metal, even with the beefy pickups (EMG81/85 kind) do not expect a miracle, why I prefer to use a preamp pedal format (TN E1) because even on the OD channel mode and red it is a bit light in gain for my taste)
But I did not buy the base for AC so I would not put it in negative point.

I use it recently but I am very happy even if a few little details bother me as the parallel loop can not be activated while the footswitch for the serial loop is possible, presets which take into account that the buttons and knobs not, but I finally found the sound I wanted, what marshall sound!
If you are looking for a good amp versatile enough (except for the pure metal and hard) to rock & roll, you fill and even more if you play guitar on a typed LP
It remains to pay slightly less than 1000 € all the same