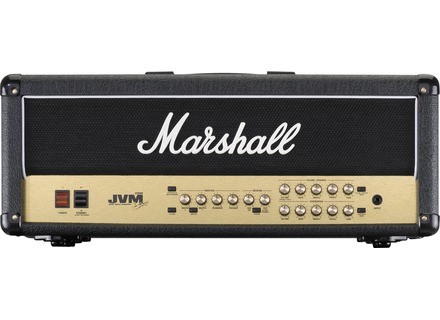 View all offers for Marshall JVM210H »

Marshall JVM210H
4
The Marshall JVM210H is a feature packed amp. The amp is a 100 watt, el34 based design featuring 2 channels with individual Eq sections as well as separate reverb controls. The master section sports presence, resonance, and two separate master volumes. An effects loop is present. A speaker emulating xlr direct out on the back panel for recording purposes and a midi programmable foot switch top it all off. The amp lacks the classic charm of earlier Marshall amps and carries the same sloppy aesthetics that other modern Marshall amps bring to the table. Minor nitpick, as the features and sound are plenty pleasing.

The midi programmable foot switch makes recalling presets simple, and allows you to toggle on/off both master volumes. The six different modes available make the amp plenty versatile. I did not get a chance to use the silent recording out on the JVM, but the addition of this feature adds a degree a value and desirability. The amp is very loud but does not retain all that much clarity at gigging volumes.

I played through the JVM with a Gibson Flying V. Marshall 4x12 cab. No pedals.

The clean channel of the JVM is not impressive and the onboard reverb does little to hide this. I believe that with the help of some higher quality time-based effects in the loop, this channel could be passable, but it simply doesn't cut it out of the box. The mid gain sounds are useable and are very reminiscent of the JCM2000 series amplifiers. The high gain sounds, as with the JCM2000 as well, was a little over the top. You will find yourself rolling back the gain significantly to tame the harshness of the channel.

The Marshall JVM210H is an ambitious amp filled with useful feature. However, when you bring the sound quality of the amp under scrutiny, the amp falls on it's face. Pricing is not competitive, regardless of feature set. The Jcm 2000 I've tested before is nearly a quarter of the price of this amp, yet delivers much more in terms of pure sound.
Did you find this review helpful?yesno
»

Marshall JVM210H
3
The Marshall JVM 210H is a scaled down version of their hundred watt four channel firebreather JVM. It forgoes the expansive and complex featureset of the 410 and pares it down to a standard dual channel head. Each channel contains 3 modes for different levels of gain and saturation, which makes this amp seem like more than a dual channel. It also features reverb and an effects loop too. It's powered by the good ol' EL34s giving it the juice and that Marshall sound.

Getting a good sound out of this amp is more difficult than dialing in the 410. That may sound odd but the truth of it is that the 410 has so many more options that you're more likely to find a few sounds that you like. Taking two channels out of the equation eliminates some of those hidden gems you might have found lurking inside the 410. The provided modes on this amp are nice enough and the interface is classic Marshall but after trying the 410 I'm simply spoiled by choice.

The tones out of this amp are pretty decent but like the 410 I think it's a bit too compressed and buzzy for my liking. Oddly enough this is more true with the two channel version I find. The clean and crunch tones have a cool EL34 based shimmer with that typical scooped midrange character that many Marshalls have in their clean sound. The second channel has a nice variety available in the gain modes, however it's a victim of too much compression for my liking. Always seems to be that way with my ears and modern Marshalls though.

All in all I think the Marshall JVM 210H is a decent amp for the player who likes the compressed type of Marshall sound and wants a bit of versatility too. They're about $1400 new which isn't a bad deal for what you are getting. Personally I'd buy a used Splawn QR with the gears as I think it's equally as versatile and sounds superior to any new Marshall made today.
Did you find this review helpful?yesno
»

Marshall JVM210H
4
The back of the Marshal JVM Series has a MIDI jack so if you have an external controller you can change amp channels with it. You have all sorts of jacks to plug in different ohm rated speaker cabs. So you can power just about anything you have. Mine works great on a 4 x12.

Staring with Channel 1 you have a nice clean sound that works for smooth ballads & country songs. Not Roland Jazz amp clean but I did not want that. The next 2 channels add a little more gain each mode 2 adds a little crunch so it works for blues & soft songs needing an edge. Mode 3 is a little more of the same just a little crunchier. This works well for rock songs.
Channel 2 picks up where channel 1 left off a little more rock sounding like ACDC & Zeppelin. Mode 2 is where hard rock lives Motley Crue, Priest sort of stuff. Mode 3 is the hottest setting & metal players will be pleased here. I tend to use the channel 1 mode 3 & channel 2 mode 1 areas for most for what I play ACDC & 80s rock type covers.

The EQs are separate for each channel & react nicely to changes I dialed in a great tone right away. I put each of them a little over 5 & adjusted to taste. The presence control works for shaping the high end & the presence control does the same for the low end. The all react nicely & if you play with the knobs a little you will get what you need.

I have a blast taking this from clean songs to rocking hard. It works great for playing in my bedroom, a little louder for practice & a little more for gigs. 100 Watts should be plenty for any situation I encounter.
Did you find this review helpful?yesno
»

Marshall JVM210H
4
The only difference in this amp and the combo is that this is just the head amp. It has all the same features but just minus the speakers and cabinet and also the power is doubled up to 100 watts in this amp. It will have a bit more headroom in the overall tone of the amp as well compared to the 50 watt version.

This is a fun amp to play. Not too much to get confused with and not too much to get overwhelming that would distract you from playing the amp. At new these amps come in at around $1500 which is a bit more than the Marshall JCM2000.

I would recommend this to anyone who wants to get a good sounding Marshall amp but doesn't want to get a Plexi and a JCM 800 or JCM2000. You can get almost as close as you would get to those tones but in just one amp.

Did you find this review helpful?yesno
»
Read the 5 user reviews on the Marshall JVM210H »