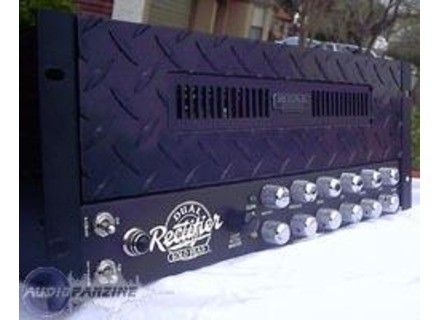 Mesa Boogie Dual Rectifier Rackmount
5
Semi professional on the road and recording with this monster never let me down fat juicy tones Larger than life right out of the Box! Sounded amazing with every one of my guitars Paul Reed Smith, Gibson, Fender & Jackson you name it this Amp produces.These were only made and limited numbers I met with several of the Mesa Representatives Extremely knowledgeable and they agreed this amp was something special Nearly impossible to find right now Extremely Rare a mythical unicorn The Holy Grail
Did you find this review helpful?yesno
»

Physically, the rackmount design of the amplifier makes integration into big rigs simple, and gets the user all the features in a smaller package. The simple two-channel layout of this amplifier makes dialing each channel an easy task. As with most other Mesa Boogies, the interactive EQ can make dialing your specific sound a little more difficult than your average Marshall, though reading the manual, and having any sort of experience with other Boogies makes this an easy task. As with most of the rectifier lineage, the parallel effects loop can be difficult with many effects, causing tone loss, volume loss, and phase issues. If you use the loop, modding to series is also a quick job. Finally, channel switching is very quiet, contrary to the switching relays in the more recent 3 channel rectifiers, which usually cause horrendous pops.

Here is where this amplifier shines. The ‘Racktifiers’ are held by many as one of the grail offerings of the Rectifier sound. While more recent rectifier offers are usually explained as ‘muddy’ and ‘fizzy,’ this amplifier carries none of those characteristics. Both modern and vintage settings are tight, bold, and HUGE; true to what made the rectifiers so prominent in the modern music scene. The low end is something to be experienced; even at extreme levels, the amplifier maintains it girth, and moves air more so than most others I have played. The clean is unfortunately nothing to write home about. With the channel cloning, channel 1 in vintage high gain can be used for a nice biting lead tone, and channel 2 modern produces the ferocious high gain for rhythms with plenty of attack and girth.

This is not a versatile amplifier. If you want many good sounds, look elsewhere. BUT, if you want THE best offering of Mesa Boogie’s Rectifier series, this is definitely an amplifier to hunt after. I ran it in a multi-amp rig with this amplifier covering my high gain rhythm, and the sound was nothing short of astounding!
Did you find this review helpful?yesno
»

Mesa Boogie Dual Rectifier Rackmount
5
The Dual Rectifier has been a staple of many heavy metal albums. This particular model is actually housed in a 4U chassis. There is a lot of mystery and allure about the rackmount and pre-500 rectifiers, and I am not fully qualified to answer a lot of the questions regarding the various models. This is the only rectifier I've ever personally owned. What I do know is that this amp is not flubby and super bass heavy like so many nu-metal recordings make them out to be. Despite being housed in a 4U chassis, this amp has every feature the normal two channel rectifier has. One thing to note is that the older models had a serial loop just like the pre-500 rectifiers. It was later on that they switched to the parallel loop.

It's pretty insane that Mesa was able to fit every feature the full sized two channel rectifiers have into this small 4U chassis. What's scary is that everything feels like it was meant to be this size. Being a Mesa, the EQ is a touch different. Every control interacts with each other, so you have "sweet spots" that can shift slightly depending on how you have the settings. The manual does an awesome job at describing this. I highly recommend downloaded the manual from Mesa's site if you're not used to dialing in Mesa amps. They're always extremely helpful.

Those who grew up listening to the nu-metal trash of the late 90s, early 00s will probably think the Dual Rectifier is a flubby, bass heavy mess. The secret to getting a great tone with the Mesa is to boost it. Get an overdrive and slam the input of the amp; it'll become a tight, articulate and actually unforgiving amp. The amp will show your mistakes if you're a sloppy player, especially boosted. The orange channel is a warm, tubey style channel that many people love. This channel can do everything from blues to liquid style Petrucci leads. The red channel is the real star, and it's absolutely a behemoth when you spend the time to dial in the amp. I never liked the clean channel; I always thought they were pretty dismal, so I never bothered with them.

Those who know how to dial this amp in will surely be rewarded with a wonderful sound. It's not just meant for low note chugging, either. Let's not forget that Sykes toured with this head for quite awhile, and his tone is always out of this world. Those looking for a tight and percussive high gain amplifier in a 4U chassis should really look no further than the rackmount Rectifier. The only thing that really competes with it currently is the extremely rare rackmount SLO100, and they're quite a bit of money.