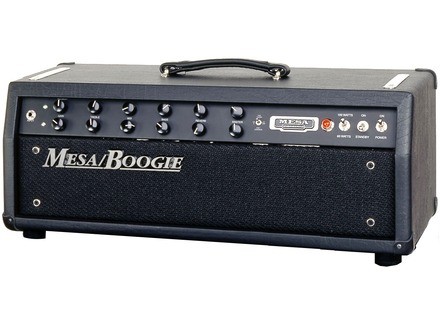 Mesa Boogie F50 Head
4
Been playing guitar for 22 years in original and covers bands. My musical tastes range from ZZ Top to The Feeling. So there's a vast range of styles I like and therefore cover with my band.

I went to a local store in Cardiff, UK call Cardiff Music with the intention of trying out a Mesa Boogie for a band mate. I bought it, he didn't. It cost £1000 on the button. I part-exed my Marshall AVT 150 too which helped as I wouldn't have been too worried if the Marshall had been stolen it was so poor.

The F50 seemed so full of energy. The amount of air the speaker moved just took my breath away. The lack of effects didn't worry me because I had an idea of what effects I wanted anyway. The dirty channel seemed like overkill on first impression but I knew I would learn to control it to my liking.
I also like the relative small size of this combo and even convinced myself that it wasn't too heavy. Actuall it is heavy but the small size makes it easier to handle than my old Marshall.
The contour control is a good feature for a lead lift.
The quality amp cover is a major bonus and the whole customer package is really good.

The foot control is total crap. The LED arrangement doesn't really tell you enough about what's going on. Changing channels sometimes leads to embarrasing mishaps making people think you're a complete amateur.
The valve grill on the back of the unit makes it impossible to get the mains lead and pedal lead back into the pouch.
The speaker is way too hard sounding and gets you down after a while.

The unit is solidly made and a good size.
I've never worried about the strength of the carry handle but mostly use a trolley anyway.

This amp has been ultra reliable. I still have the original valves after two years. Other models of Boogie seem to need regular re-valving. It must be said that the valves are pretty unremarkable and neutral sounding but rather than spend countless hours changing valves I changed the speaker. I put a handmade 50 Watt Weber in it which took about 12 hours to settle in. Now this amp is the sweetest sounding amp I've ever owned.
As a note of importance, I cannot find a single overdrive or distortion pedal that seems to work as I'd like it to with this amp. That's a major issue for me so I am kind of limited to using the amp's drive only.
This amp has a treble boost pull pot on the clean channel. You'll never need it as the amp, if anything is too trebly and not bassy enough.
It's worth mentioning that I will probably never buy another amp again. This one's just too good to let go.

Mesa Boogie F50 Head
5
Mesa boogie is really known for their extremely well built and roadworthy amplifiers. They built some of the best sounding and easily most recognized amplifiers in the world. You get a nice thick natural saturation and compression that makes Mesa boogie's sound only like themselves. They have such an organic and surreal tone that is been used in multiple gigging and recording sessions of my own. This amp is basically the same as the combo but just in ahead version.

Handbuilt in the USA


The tone of this lamp is a nice warm thick saturated tone. The tone will vary from cab to cab and speaker to speaker. I prefer V30's or M90 with most Mesa Boogie amps.It's a cool little amp if you need something that's very small compact and easy to move around. You basically have two independent channels that features to 6L6 power tubes. You have 50 W of power and most importantly this is a nice little practice amplifier. You have a record or headphone output which allows someone to play silently with headphones on. With that little feature it pretty much tells you all you need to know about this amplifier. It's simply a Mesa boogie amplifier built for someone who needs a small practice amp.


These amplifiers have been discontinued first some time now but you can find them on the use classified sections fairly easily. They're pretty popular amplifier and they have a great sound and a great tone and you probably won't have to worry about them breaking down too often. They aren't as popular as the combo but you can still find them out there.
Did you find this review helpful?yesno
»

alexmar's review (This content has been automatically translated from French)

Mesa Boogie F50 Head
5
50w amp all-tube (4 12AX7 and 2 6l6)
Between an instrument, effects loop (adjustable), three-h + p outputs an output line out.
Two completely indpendants channels; SETTINGS: gain, treble, mid, bass, reverb, volume.
Bonus: the switch "contour" widening the mids and boosts bass and treble.
It is simple, effective and ample, everything is controllable via footswitch foot three buttons.
I put 8 because we can not dbrancher power cables and footwitch, is boring and my identical knowledge on all boogie ...

Very simple to adjust, the settings are very interactive but if one is a little bit accustomed to it very quickly these amps is THE sound.
The manual in English is nice, I like to read dlires Randall Smith on the interaction between the settings ...

It is ultra versatile, so it fits all styles of music; it will be a bit just for the big metal hand but everything is at your door with such an amp!
I use a Les Paul, Dearmond MT-75, the Telecaster, it respects all that made him swallow; saturated fat sound with Les Paul, with his clear slamming TV ...
Personally I love the crunch when you push the gain of the clean channel ...

For several months, I like its versatility, small size and weight reduces, plus he's pretty, is not gte nothing!
on the other hand is expensive even when brothel; 1500+ nine.
I had a lot of stuff; two bodies marshall, nomad 100 combo (see my review), Vox AC-30, fender concert II Sovtek Mig-50 ... and I've played dozens of others ... I chose the one after t be obliged to sell my nomad (which I miss terribly, sniff ...) for their ct practice, versatility and ... the price, yes, it is "cheap" for a Boogie!
I would do this choice without hsiter is a good companion!
Did you find this review helpful?yesno
»