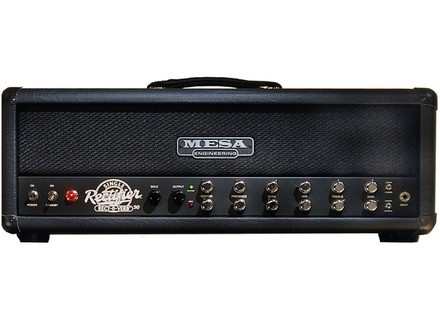 Mesa Boogie Rect-O-Verb Series 2 Head
4
Mesa Boogie continues to produce high quality guitar amplifiers for the masses.
Mesa Boogie is one of the best amplifier companies in the world. They have been building high grade high quality amps since the 70's. They took a different approach to the high gain amps that Marshall was putting out at the time and whet a bit different route. The have been able to grab a piece of the rock and roll market and push the envelope.

This amp has the sound and the feel of a Rectifier amp from Mesa Boogie but just with 50 watts of power and the reverb added to the circuitry. This amp comes with a good solo boost as well. In addition you get a three button foot switch that allows you to change the channels, add reverb where as needed, and kick in the solo patch.

I prefer to play all Mesa Boogies with a Gibson Les Paul or another guitar with a humbucker installed pickup. That way I don't lose any of that fat chewy tone that is characteristic in this amp. Any guitar will certainly but there is just something that connects with a Mesa Boogie and a Gibson Les Paul. This amp is a rocker's amp for sure. These are high gain monsters and need to be given that respect. Fire breathing distortion that is sweet and gritty at the same time. nothing in the world sounds like a rectifier amp from Mesa Boogie and this one just has a little less wattage which makes it a little more spongy in the feel and less headroom and the reverb which adds color and depth to the tone.

These amps have long been discontinued for a while now. You can find them all over the place though. I have seen them go for right around $850 average priced. This is a good price for this amp that I have seen. Perhaps you could fin one on craigslist and talk the guy down a $100 or so. A great amp if you like reverb and don't need 100 watts of power.
Did you find this review helpful?yesno
»

I would recommend a 2nd hand bargain.
Did you find this review helpful?yesno
»

Joe-Rhys's review (This content has been automatically translated from French)" saturation reference!"

Mesa Boogie Rect-O-Verb Series 2 Head
5
is a head lamps with 50 W every 2 channels, a rhytm and lead, each has its settings independently of the other channel.
for each channel was; gain, treble, mid, bass, presence and master's + reverb knob behind the head.
there are two switches for switches with 2 possibilities; "or Pushed clean" and "vintage or modern."
This actually allows each channel to receive a boost for a little more power and color for the channel clear and further saturation level for lead channel.

for me it seems simple, but it takes a minimum of time to understand the fundamentals of this head.
I have not read the manual.
for sounds, I'd say I preferred the overdrive and I am left with the impression there, there is nothing to add to this issue head saturation.
question sounds clear, frankly, there's more! (Proof: my laney lionheart!)

this head is well suited for other rockers and metalheads, the rest is not even worth thinking about!
for sounds, imagine the distorted sounds of references (metallica, linkin park, POD .... etc. ...) and voila!
it's just incredible that level, and I myself am surprised to say it again today (because it's been almost a year since I've tested it and I remember it as if it ' was yesterday).
good, of course, we should see the side of Diezel for something equivalent in terms of sound, but it is no longer the same rate (even when it costs about 2000 € for a combo!).
I tried with a lag Arkaan 200 black shadow.
what I liked, and the distorted sounds.
I did not like, sounds clear typed too big sounds without finesse.

I have not tried that for about 45 minutes.
I too tried other amps (Soldano, Marshall, Laney, Bogner, Vox, palmer ...).
as I said above;
most; distorted sounds.
the less, sounds clear and the price (1700 € wholesale)
I think the price is expensive but I think it is better to wait to find a used one to pay it, it was still a high quality of saturations at our disposal and we feel that when you turn the knobs of a millimeter, the sound changes, it is a sign for me high quality, precision.
value for money is there, we buy by product knowledge.
For me, it's still a reference sound, I would buy property in addition to my head laney lionheart; like that, I head for clear sound (Laney) and a head for lead (mesa boogie)!