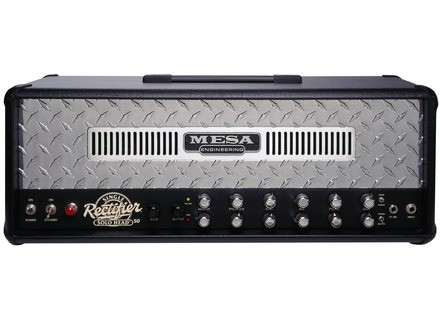 The Single Rectifier is two channels (paying homage to the famed 2ch Dual Rectos of the nineties) and features the same clean/pushed clean modes on channel one and the raw/vintage/modern modes on channel two that the Dual and Triple Rectifier have. Like all Rectos (and true with most Mesa amps in general) it can be difficult to grasp how the controls react to one another. The preamp structure of these amps has a lot of stray and "fizzy" top end that has to be tamed at higher volumes. The Single Rectifier does away with the third channel that many of the Dual/Triple versions have, so I find that channel two is more balanced in going from low gain to high gain in mode selection, as opposed to having a bunch of redundant modes (IE: Ch2 Modern and Ch3 Vintage). It is all a matter of opinion though.

I tend to like Mesa amps with Gibson, PRS, or other humbucker loaded guitars because it allows for the amp to still have the saturation and thick tone that I desire for the music I'm playing primarily. I find that using an amp like this with single coils just sounds thin and somewhat buzzy. Also, the scooped midrange nature of these amps doesn't really work all that well with single coils I find.

The clean channel is basically the same as the Dual/Triple Recto. I find that having it in 50w power doesn't quite give me the headroom that I'd like, so I have to say I prefer the higher wattage versions for cleans. The dirty channel is an interesting mix of Ch2 and Ch3 on the 3 channel Rectos which I like, and having the 50w power maximum really allows the amp to sound a bit spongier and more classic, plus it allows me to turn it up a bit more and get those killer even order harmonics that tube amps deliver when cranked to oblivion.

All in all I feel that the Mesa Single Rectifier is a great amp that is an excellent choice for someone who loves the tone and layout of the Mesa Rectifier amps but doesn't need every extra feature of the Duals and Triples. It is about $1450 new so there is about a $500 price difference in this amp compared to other models. Used they can be had for about $700-$800 which is a steal for such a good and high quality amp. Mesa stuff is usually fairly reliable so I wouldn't have any qualms with it. Definitely worth checking out.
Did you find this review helpful?yesno
»

Mesa Boogie Single Rectifier Solo Head
5
Simply one of the most used and iconic high gain amplifiers in the world. Mesa Boogie first introduced the Rectifiers back in the early 90's. Since then millions of people have played these amps on stage or in the recording studio.

These amps have a bit an unique tonal character to them that no other amplifier have ever done. They have a chewy fat distortion tone that seems almost as intense as the metal case to which houses this amp. This is a bad ass amp that will kick you in the teeth quite easily.

Output Level Control (over all channels)

This amp is just awesome! I would say perfect but no amp is perfect. But for what this amp does and has done successfully now for decades is rock. This is a rockers amp to say the least. You won't play trash like Coldplay with this kind of amp. This is an amp for the person who needs the distortion channel to be so over the top and fat.

I prefer to play all Mesa Boogies with a Gibson Les Paul or another guitar with a humbucker installed. That way I don't lose any of that fat chewy tone that is characteristic in this amp. Any guitar will certainly but there is just something that connects with a Mesa Boogie and a Gibson Les Paul.


At new these amps come in at around $1450, which is a great price for an amp that will probably out live you. These amps are virtually indestructible. They are build with such standards and quality that it would take a lot of abuse to dismantle this amp.

I would recommend any person who need a great sounding high gain amplifier to check out this amp. It may not be your cup of tea but I guaranty that the first strum of the chord and you will be hooked.
Did you find this review helpful?yesno
»

Mesa Boogie Single Rectifier Solo Head
5
This is a 50 watt tube amplifier, although it's name is a bit of a misnomer; in spite of being called a Single Rectifier, from my understanding it does not have a rectifier tube, and has a solid state rectifier, unlike the Double and Triple Rectifiers. That being said, this amp is powered by two 6L6 tubes, which can be switched out to twin EL34 tubes via a switch on the back of the amplifier. It uses a complement of five 12AX7 pre-amp tubes and features two channels, each of which can be set two different ways. The first channel can be set to clean or crunch, while channel two can be set to vintage or modern. It does not have any reverb or a solo boost, and a footswitch changes between these two channels. To change manually between each channel (without the footswitch) there is a switch in the back. There is also an effects loop with controls to set how much effect goes within the loop.

Each channel has EQ settings, master volume control, and there is a main output for both channels.

Just dial up the controls and you'll be in tone heaven. I have the manual, but never really needed to bother with it. It is well suited for the studio. For a live setup, additional effects equipment will likely be needed for most modern styles of music.

This amp has plenty of high gain, and within a studio environment have never needed to put distortion in front of it. For live use, I've paired it with a Line 6 POD XT for consistent results.

It is plenty loud, and although this is obvious, the user should be aware that the quality of the sound of this amp is intimately tied to the quality of the cabinet to which it is connected. I generally use mine through Peavey cabinets with Sheffield speakers, and for the studio I have an open-backed Mesa Boogie cabinet with a Black Shadow speaker that sounds incredible. The variety of tones this amplifier is capable of producing is incredible.

Anybody who tells you this amp isn't loud enough because it's "only 50 watts" is either full of crap, deaf, or both!

The build quality and tones on this amplifier are excellent, especially for a studio setting. Connect your favorite switchable effects equipment and you've got a serious live rig. In the time I used it live, in spite of keeping a tiny solid-state back up amp with me at all times, I never had it fail on me.

It would be nice to have more channels or built-in effects, but that just won't happen with a Mesa Boogie amp at this price level.

Probably a large portion of the costs goes to paying for the Mesa Boogie name. I will say this, you hardly ever see these amps come up for sale used, and there's a really good reason for it! In my opinion, there's no better amp manufacturer than Mesa Boogie.
Did you find this review helpful?yesno
»

Mesa Boogie Single Rectifier Solo Head
4
The Mesa/Boogie Single Recitifer is the 50 watt version of the famous Rectifier line that Mesa offers. However, just because it's a 50 watt amp doesn't mean it's a slouch. In fact, this is one of the tighter amps in the Mesa series. It features two channels with independent EQs and voicing switches, a solo boost, EL34/6L6 switch, parallel effects loop and a slave out feature.

Despite this being a 50 watter and missing the tube rectifier switch, this amp breathes fire. It's loud enough for any situation out there and will bury the hardest hitting drummer. The voicing switches help make this amp fairly versatile, too. The solo boost is probably the coolest feature on this amp; I really wish I had one on my rackmount rectifier. The loop, however, is bad. It can never get fully wet (fully serial or however you want to describe it). It's always like around 90%. That's probably the biggest drawback about this amp, utilization wise.

The thing sounds so pissed off that it's ridiculous. Personally, I always throw an overdrive in front of rectifiers to really tighten things up. Once you do that, it can play any kind of metal you can think of. Although this is primarily a metal amp, it can do some decent cleans with the help of the voicing switches. Lead tones are decent, but I wish they'd be a bit more chewy. Midgain on this is sometimes hit or miss, depending on what you're going for.

The amp is a great amp for those looking for a metal tone, especially once it's boosted. If the Dual Rectifier is too much money, this is an awesome alternative. It has enough power to play on stage with the hardest hitting drummer, has a pretty good amount of features and is pretty cheap on the used market. Just be aware that the effects loop is kinda finicky when it comes to certain effects.
Did you find this review helpful?yesno
»
Read the 19 user reviews on the Mesa Boogie Single Rectifier Solo Head »