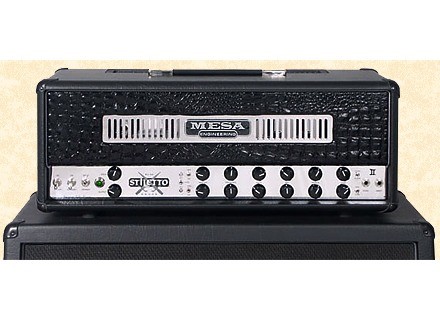 Mesa Boogie Stiletto Deuce Stage II Head
4
The Mesa Boogie Stiletto Deuce Stage II is the 100w version of Mesa Boogie's Stiletto series of amps. The Stiletto was basically designed to have more of a Marshall-y character with an EL34 based power section. It is still laid out similarly to a Rectifier head, but the core tones are more akin to a Marshall overall. It is a two channel head. Each channel is set up with identical controls (gain, bass, middle, treble and master volume). Each channel is equipped with two mini switches, one to toggle between 100w and 50w and one to switch between three different modes that each channel has. The clean channel contains Fat Clean, Tite Clean and Crunch modes, and the distortion channel has modes called Crunch, Tite Gain and Fluid Drive. There is also a switch to toggle between bold and spongy power modes. Here's the full list of specs:

Setting up this amp is fairly simple. Each channel is laid out with just core controls and there's not too many different settings to deal with as per certain other Mesa amps. You basically pick your mode, set the EQ to taste and you're off to the races. Dialing in a sound that's pleasing will vary in difficulty depending on what sort of tone you are after. This amp was meant to sound very Marshall-y, but I find that it still has that certain Boogie characteristic that keeps it sounding like what it is - a Rectifier. However, the EL34 tubes and using spongy power can help to "brown" the amp out significantly.

I've tried this amp with various guitars and amps. In my experience it's a very picky amp in terms of what it sounds really good with. The absolute best rig I had set up using this amp was a PRS Mira Korina guitar (with PRS humbuckers) and a Mesa Boogie 4x12 cabinet with Celestion Vintage 30 speakers. This combination (and a whole lot of treble/presence roll-off on the amp's EQ) created a killer 90s rock tone that reminded me a lot of a slightly more vintage voiced Soldano SLO100 or perhaps a juiced up Marshall JCM800. I found that the clean channel sounded somewhat bland and weak for my tastes. I'm used to more of a Lone Star type clean sound... the cleans on this amp were more of a skinny, weaker British type clean sound, which isn't my thing. The drive tones were pretty cool, but it really depends on the guitar and cabinet that's going with it I found. I tried it with Les Pauls, Strats, Flying Vs, etc, and I just couldn't dig the amp. However the tone with the Mira was obscene.

All in all I think the Mesa Stiletto Deuce is a decent amp for someone looking for a somewhat British voiced rock head that still has a lot of the Mesa flavour attached. For my tastes I prefer the Electradyne or the new Royal Atlantic but this amp certainly holds its own when dialed in to perfection. The $1800 price new has me scratching my head, but you can pick them up much cheaper if you look around...

It's worth a shot, though probably not Mesa's best attempt at a British voiced amp by any means.
Did you find this review helpful?yesno
»

Mesa Boogie Stiletto Deuce Stage II Head
4
One of my best friends owns this amp and has served him quite well. Fortunately for me I have been able to spend some time with it as well. This is a Mesa Boogie that is voiced in the British realm. What that means is that it has a familiar characteristic to a Marshall or maybe an Orange amp or even a Hiwatt. There is something about those amps that carries a similar tune to one another.

What I like about this about also is that it takes pedals very well. Throwing a tube screamer of some like a clean boost and you will have this amp sizzling. This amps has many features that are prominent to Mesa such as the Recto or tube switching and the sponge/tight setting which changes the variac and loosens the amps or tightens the power section of the amp.

This is a rockers amp. You will blown the hinges off the doors when you crank this thing up. I have been on the wrong side of this amp a few times where it just lit me up and thump my chest. The best feeling I got with this amp is a Les Paul and clean boost like pedal in front of it. This amp gets that pounding feeling but a full bodied warm tone. I find this amp not to be much of a lead amp per se but rather a solid rhythm guitar player amp. It doesn't cut through as much as I would like if I was the only player in the band, but it does thicken the walls of the sound for the band quite well.

If I were a rhythm guitar player in a band I would look to this amp. It is rather inexpensive to be hand built. At new they come in at around $1900, but you can find them fairly inexpensive on the used market right now. I would recommend some to try this amp out against other Mesa's if that is the tone you are going for. This amp may not be for you if you are used to the Rectos or the Mark series. It has the similar characteristics to Mesa but it is its own beats.
Did you find this review helpful?yesno
»

It is also important to note that the Stage II was released as a revision soon after the Stiletto’s original release. Simply put, the chain channel was tightened and restructured, as the original model suffered from a flubby response.

The Stiletto offers a very simple 2 channel layout, with the usual features that a Mesa amp owner is used to. It is easier to dial in than other Mesa models, such as the Rectifier or Mark IV. The few voicing switches per channel offer many tonal options, but different voicings on the same channel can not be used on the fly. This would be a nice feature since this amp offers MANY great tones amongst the different modes.

Being an EL-34 amplifier, and Mesa’s stab at the british tone, the amplifier produces more mids and less lows than your typical Mesa Boogie. The clean channel produces a great clean, especially for what is consider the ‘norm’ for EL-34 based amps. Fat clean allows a slightly rounder response, and crunch makes for an AMAZING blues sound. This mode is actually repeated on both channels, so players can run it at different gain levels since it responds so well. Channel 2 goes from a nice crunch all the way to a tight and saturated gain, perfect for quick rhythms or leads. Watch out for the treble though…especially when running vintage 30 speakers, the high end response can get very sharp and unpleasant. Simply, this amplifier plays much like a ‘marshall with a Mesa twist.’

The Stiletto Deuce II was built as a tonal compliment to the rectifier series, producing more high mids, a higher bass response, and overall tighter tracking. In a mix, these two amplifiers perfectly compliment each other, and I HIGHLY recommended it for two guitarists playing together in a band, or a stereo rig. For those suffering from the sluggish response of the Rectifier series, but wanting to stay with a similar gain structure, the Stiletto Deuce II is your amplifier.
Did you find this review helpful?yesno
»

Rectifier tubes for a compressed vintage sound or rectifier silicon diodes for a more linear and sharp sound with stronger attacks, ideal for rhythm parts.

and Spongy lowers the internal voltage for a more vintage sound reminding me of Marshall and Hendrix!

Five sound modes to cover all your needs. From clean to high gain and crunch, which is how this amp sounds best.

I use it with my band and to record.

If you want to get the best out of the amp the musician must have decent playing skills.

With a 4x12" Rectifier cabinet you get a mix of British and American sound.

Marshall feel with Mesa sound character. The amazing crunch sound is the main asset of the amp. The dynamic range is incredible.

High gain modes are also very good. You get a great sustain with a good guitar.

You don't get the fat sound of a Rectifier because lows are higher and mids lower. The sound is clearer and sharper.

The 50-watt operation (spongy) combined with the rectifier takes you back some decades. A delight!

In 100-watt operation (bold) with the silicon diodes the tubes get red hot and the power is jaw-dropping!

I needed some time to control the response of the amp. Once I did it was a pleasure. I love it with a Gibson guitar. I would like to play it with a PRS.

The amp faithfully reproduces the sound character of the guitar.

The only con are the original tubes. It's like driving a Ferrari F40 with Twingo tires. It just doesn't perform! Ever since I replaced them with NOS tubes, ...... it boogies!!!!

I get a typical rock sound! I love it!

I've been playing it for one and a half years and I still love it the same.

It's expensive but definitely high-end.
Did you find this review helpful?yesno
»
Read the 5 user reviews on the Mesa Boogie Stiletto Deuce Stage II Head »