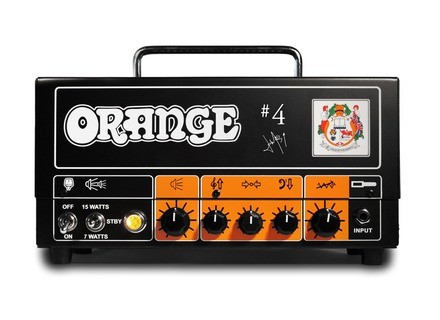 Orange and Black It might seem incredible but, up to this day, Orange had never offered a signature amp. But now the Jim Root #4 has changed things for good! So it's time for us to put the focus on this small black animal. Read more…

jeff13th's review (This content has been automatically translated from French)" I love ..."

Orange #4 Jim Root Terror Head
5
I'm from Montreal, Quebec so my prices are in Cdn $ and before taxes

What kind of amplification (lamp, transistor, ...)? What is the power delivered? What connection? What are the settings, the effects? ...

For this set everything was said and orange website répopnd well this is questions.

The configuration is it simple? yes easier you die!
The manual is clear and sufficient? ... The yes!
Gets it easy to sound good? Yes if you like the sound Orange.

Is it your style of music? Quite blues and rock MÉTAAAAAAAL!

With what (s) guitar (s) / low (s) or effect (s) do you play? Several different guitar with Micro and different overdrive pedal. A noise suppressor is a must with this amp! Important to consider the guitar pickup and lamps and hp thing used greatly influences the sound as with any guitar amp but it is even more obvious with it. That, say it is natural sleeping I wake up without Tung ground and HOOO MY GOD!

What kind of sound you get and with what settings ("crystalline", "bold", ....)? What are the sounds you prefer, you hate.

Orange was the sound! How to say we like it or not like it I love it! But in a nutshell DYNANIQUE!

How long have you use it? 11 months

What is the particular feature you like best and least? Sound DYNAMIC orange / DYNAMITES!

Have you tried many other models before buying it? ten!

How would you rate the quality / price? Well

With experience, you do again this choice? . Yes without hesitation

Very easy to use, you put everything in the middle and it sounds serious!
You can get a large range of sound quite easily.

I play mostly metal, Djent and blues. This amp is perfect for what I do! One can get such sounds 6505, Krank, Engl quite easily I think. I use it with either a Mesa 4x12 or a 1x12 Engl 90s, while Celestion V30.
I play it with an Agile 8 strings, a Jackson RR3 and a custom Draco. The amp brings out the grain and character of the guitar.

I am very happy! It really has a very aggressive sound and can be changed very easily. One can also get a nice little crunch that cleans.
Lamps start around 10 seconds to heat which is more than reasonable!
All metal frame, carrying case, reasonable power, ideal for repeat and play at home!
It lacks a clean channel! But hey, in the light of the quality of the first, it will not complain!

jujufafa's review (This content has been automatically translated from French)" Formidable"

Ultra simple setup: a single channel, it's plug and play: you plug it sounds.

The clean sound is not his specialty, although it may have its charm he will never have enough power to play in groups.

It quickly crunch in the first third of the race gain at 12 is already in sounds so muscular stoner past 13h one enters the large saturation, always with a typical grain: very very biting midrange and bass fuzz .

I use a dinky Jacskon DK2M and Ibanez Darkstone, and I still get very easily what I want:
crunchy blues (awesome single microphone), the mad and generous saturation through the muscular rock, punk or stoner.

I have not tried a lot of pedals (chorus boss, Blackstar HT Dist, Lemon Squeeze Modtone) but it is always passed without problems, the wheat from the amp to the air to accept the pedals live. As against the effects loop seems a tad messy, one wonders what brings the lamp by comparing with the effects loop of a Peavey Classic 30 and even a Peavey Bandit 112.

The EQ does a very good job especially in the midrange knob is very progressive and affects damn about the general color of his: to navigate between the U.S. (scooped mids) and English (mediums background) very easily with the always personality and quite dynamic.

I use it for 3 months now, on a 4X12 cab Hughes and Kettner Vintage series.

The +
The format can be lugging around with the bag comes with.
Power level is terrible, you can rub any drummer. For clubs it goes to the big plate anyway will put a microphone in front.
At the sound can tackle any style of rock / metal and even blues or funk still crunchy with lots of character and grain, so try before you buy because you either fall in love or hate you.

For the price / quality ratio I see in the long term, it is made in China so there's always a little apprehension in any case I do it again this choice without hesitation, because his level and look and it has to face.

Dantehicks's review (This content has been automatically translated from French)" A very nice surprise!"

Very simple. Plug and play.
No need for instructions.

Warning this amp isn versatile in the sense that the sound is clear unusable group as not powerful enough.

So very rock sound is obtained. Big crunch powerful.
Personally I use it with the gain halfway:
It gives a powerful sound quite grainy with a nice grain british (but fairly typical)
(Must imperatively be tested before large volume purchase)

Ideal for the music I play in a group (90's rock) like "faith no more" smashing "coughed.
Perfect as pr punk rock to "bad religion" and also for the noize (Refused) or the stoner ..
After that will depend of the guitar but it works well with a humbucker or strat (playing the guitar volume.
0n can also be used for rock 70's also moderating the gain.

Beyond half the gain is going to distortion. C is not my thing but metaleux will find their account without problems.

I do not use it for a long time but I was immediately hooked to her.
It sounds terrible!
Honestly I was gone for a test orange AD30 (which sounds great too) but I did not like I found the smooth sound .. more mat. Not convinced ... In any case it does m apportai tiendr more than what I had in gear.

Before leaving I have asked (without much hope) àvessayer that I took for a toy .. This tt jim root.
after the test I have dropped to my preconceptions (related to metal design and the signature of the amp)
We can do many things with this amp as it's still rock.
Are not 50 sounds but if you like the grain is happiness.
Sounds very well with the cab jim root.
But i have tested it with my mesa 1x12 cab and it does it well too.
Therefore resumé good rock amp with good momentum, which readily accepts effects (od in frontage) more im a boycle effect.
For those who fear the 15 watts ... There's plenty to do for group play c is guaranteed!
I (and I had) a lot of amp (engl fireball, JCM900, peavey, Laboga)
This one I did not need it but it really put me on the ass (maybe it is made to go with my reverend daredevil? ..) Suddenly I broke down and I bought it. ..
Still, it is a bit expensive I think (I did not take the cab either)
I remake that choice because I have other amps for clean sounds.
This is a personal opinion but I prefer to 10fois engl fireball for example.
This is a very good surprise for me. But try before you buy with sonmatos.

Did you find this review helpful?yesno
»
Read the 8 user reviews on the Orange #4 Jim Root Terror Head »