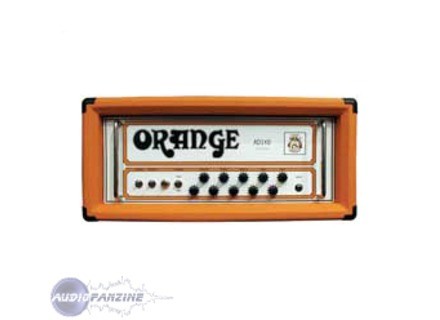 Orange AD140TC
5
The Orange Amps AD 140 TC (twin channel) is a dual channel guitar amplifier head.<span> </span>The amp has a single ¼ inch input in the front for your instrument and a ¼ inch speaker output to send this to a cabinet.<span> </span>It also comes with a foot pedal so you can select between the two different channels.<span> </span>Not much to the amp beyond this…

<p class="MsoNormal">The make up of the Orange Amps AD 140 TC is pretty simple, but at the same time it definitely offers up a lot of versatility and options.<span> </span>Having two channels is a huge plus, as in tandem with the pedal you can set two distinct sounds and change between them with a push of the button.<span> </span>Each channel has pretty standard parameters, including for master volume, treble, middle, bass, and gain.<span> </span>The two channels are pretty much exactly the same.<span> </span>On the face of the amp there are also switches for power, stand by, and to choose between channels one and two.<span> </span>

<p class="MsoNormal">If you’ve ever used an Orange amp, you’ve probably got a pretty good idea of what this amp is all about, as it has the same killer tone found on all Orange amps.<span> </span>Both in terms of a clean tone and distortion, this amp is absolutely awesome.<span> </span>I’ve used the amp for recording with a Fender Strat and an Orange 4 x 12 speaker cabinet.<span> </span>I can’t say a bad thing about the way this amp sounds, as the clean sound is crystal clear and the distortion is some of the best of its kind…All with room for tweaking to your liking.

If you have your heart set on an Orange amp, which many guitarists these days do, there are all sorts of great models to choose from.<span> </span>I’d encourage those interested to head down to your local Orange Amps dealer and try them all out, as they all have something to bring to the table.<span> </span>It’s really just about what will work best for the sound you’re going for and what will fit into your price range.<span> </span>Having said all this, don’t make a choice until you try out the AD 140 TC, as it is as good as any of them!
Did you find this review helpful?yesno
»

stupendous's review (This content has been automatically translated from French)

I think we can not do the simplest level configuration.
Each knob Ragit prcisment for trebble, middle and bass, then to vary the saturation of the amp just to play on the Gain and Volume.

Easily obtained a good sound Manir gnral, although for an optimal grain, you will need to push the head a little because it is a 140watt!

I have no manual but there is not REALLY need.
For those interested here is a link, just click on AD140HTC
http://www.orangeamps.com/manuals/
The manual is in English, but it is enough.

I play in a rock / instrumental / progressive, and it is everything.
I may as well have an extremely crisp and clear sound, or sound almost too saturated everything is played with Gain and Volume.
However it is important to say that Channel A is in its design built to match the sounds Manir clear up crunch (but big big crunch if the gain is 10), while Channel B should more than crunches and vritables saturations.
All remaining extremely dynamic, and the volume goes up, the more the dynamics of the amplifier is required.

I play it with a Gibson ES 333, an Ibanez AXS32, a Les Paul Custom and a Stratocaster 71. They possdent all their peculiarities, and therefore we must find the optimal sound for each.

It is possible to have a sound not too saturated and trs dynamics especially on channel B, which gives more power and its phnomnal, which is a pretty good ass amp british !

It's been ending for a year I use it, but I rvais an Orange amp for a long time.
The amp is gnial for its simplicity and power, but especially for the grain that possde. BMOL small for me, there is no reverb intgre (too bad when you see the quality of their other sries reverb), but it's not really in the spirit of the amp.

This is an amp I think extremely hard to find nine of Paris, especially if one does not have 2000 euros, so to get an ide of the Orange, I spent a few months to try the AD30, the Rockerverb 100, Rockerverb 50 combo, the Rocker 30 and even the Tiny Terror, knowing the sound dj marshall, Fender and Hughes, I was looking for something that suited me more for the music that I could résumé as something couillu, but powerful prcis English.

The report price is plutt good quality, having found nine in 1200, I have not really complain, and I would do this choice without a doubt!