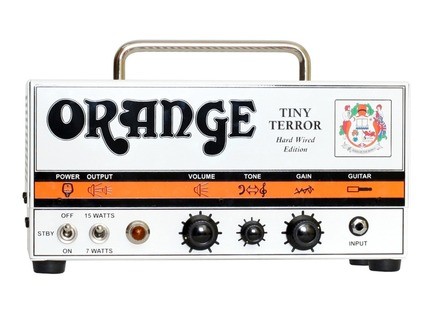 Vince Brooks's review (This content has been automatically translated from French)

Orange TinyTerror Hard Wired Edition
5
Show features the Tiny normal, except that the cord is hand made in England.

You plug it sounds, you play.

Tested in store with a Gibson Les Paul BFG Gary Moore and 4x12 of the same brand (Orange, eh, not Gibson).

Sounds very "straight" in clean, dry and somewhat accurate but not without color or without a soul, I really like.
Much less versatile in soft and clean as a Fender, for example, but much more rock and roll.

In saturax, well it's simple, it is the foot is enjoyable to death, you'll land more to stop you and you got to play hard not to push the sound.
And yet, even at low volume, it does.
Grain, body ... I love it.

Not very versatile but it's not what we asked.
I do not know how the cable brings to his hand because I have not directly compared to the standard model, but the seller told me that the hand wired brought a pile of excellence in terms of more RELIABLE , power and definition.

Only defects related to the concept of "no frills, one branch and it sounds (which are not so sure if it fully supports the concept): it is monocal, there is no reverb (although on what kind of amp they're going willingly) and there is no effects loop (in short, the same "flaws" than those often cited for its Chinese-made counterpart).

One of the few amps with a few flaws, but I fell in love ...

Published on 02/03/09
This amp offers a step up on the Tiny Terror, according to Orange, with transformers, ‘carbon comp resistors’ and ‘mustard capacitors’ and comes in a leather padded gig bag.