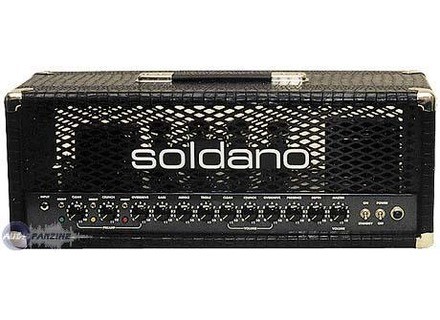 Soldano Decatone
4
I'm one of those guitarist that is always on the prowl for the ultimate channel switcher head. Sure, some days I like to have a single channel AC30 and use a few pedals but when you're on tour a great channel switcher comes in handy. I have probably played 100 heads that are 3 or more channels over the years. The Decatone was one of the first 3 channel heads. Sporting 5881 tubes, a simple 4 EQ and depth control layout, and hand built quality, the Decatone was a big deal back in the day. And still is.

The FX loops on these are tricky. Certain effects sound great in it and others really need to be used in front of the amp. Playing with the effects mix knob helps a lot too. I really feel that you need a solid pedal board or a good midi setup to get full use out of this amp. All three channels are pretty solid so you need to have good controls at your feet.

I used the Decatone for a while in a pop act. (Yes that's right, a pop rock band) and it probably saw 20 months total of touring when it was all said and done. Never a hiccup either. These have a hot rodded marshall vibe but the EQ is done much more tastefully. The lead channel is the highlight, and while it can do searing aggressive lead, it's put to better use by turning back the gain knob and using the guitar to control it. The crunch channel is more of a "less" version of the lead channel with a less aggressive voicing to go with it. I tend to use this channel about 30% of the time. The clean channel gets used sparingly because I don't really need it tbh. There is no power amp gain at all really. It's all preamp. So you don't exactly need to crank it (as if you could) to get a good sound.

Most reliable amp I've ever owned considering how hard I drove it. It really takes punishment and sounds great every night. If I could use it for pop rock then imagine what else it could handle? These aren't just for metal...I promise. This might be my favorite Soldano amp behind maybe the Hot rod 100-Loudest amp ever.

See all 6 photos of Soldano Decatone »