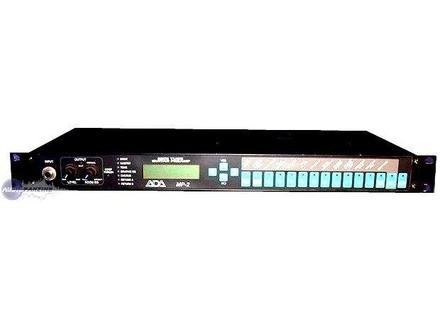 All user reviews for the A/DA MP-2

This has 6 outputs ( 2 line out to poweramp, 2x XLR w/ Cab sim, and 2x 1/4" cab sim outs that can all be used at the same time!) Awsome and emense tone perameters! programable FX loop w/ mix control.

I have used mine since 96' and every time i go into a music store i walk out thinking I LOVE my amp! Newer tech has surpassed it's Heavey Rhy tones but not the leads. It responds nice to a TS 808 boost and the Vai tones are solid! Overall a great preamp and w/ Russian tubes the Warm Hi Gain channel sounds exactly like a Mesa Recto! But i like the orig sounds (China Tubes). This preamp in front of a Mosfet poweramp and V30's has been amazing and timeless! If you see one cheap GRAB it! (i am a Pro quality gtr player of 27 yrs!)

A/DA MP-2
5
It is a two 12AX7 tube preamp with 10 amp sound types, 3clair, 3vintage, and a big fat 3higain gain.
From a connectivity point of view it to all who need two input jacks, midi in out thru, 2 effects loops, two outputs for hp, 2 hp output simull etc. Lastly, what happiness!
Level settings is simple, and finally if you want. In the first choice on the type of sound you want, then adjust the gain and the 2nd master, you see if you want a compression 3, 4 you choose your tone (eq 4 bands), you refine with 9-band graphic eq, auto wah rules you or angry with you Chorus If you mix your effects loops, in case you put a noise gate and at the end you shall, while having a possibility of setting changes compared with those with the initial "Compare" button etc.
Finally, in short, very complete but is not useful or even completely gadget

At first I suggest you take a look at the factory preset for I say to you can have virtually ALL the sound with this device, I find especially thanks to the eq 9bandes
To get the right sound you have to know that all the strings sound is perfect, this device is that the lamps
my config is micro evolution DiMarzio Ibanez S370 => ds1 mod dx 9 or ts flexi keeeley mod => ada mp2 => tc g-major loop A => mesa 50/50 => Marshall 1960A 4 * 12 "Celestion V30
The manual is on the site adadepot

Before I had a poor gainiac rocktron, then the sound will des60s the 90s with a strong 80s influence (put the chorus and you'll see)
I'm a fan of Steve Vai but I love playing the gypsy ska, the band and all music of Eastern Europe as well as rock, hard, funk, with everything I do, I ' preset to 128 I used commme I want!
At SETTINGS stay on a very neutral eq with bass in two
I personally use only the clear sound except for the fat and the warm vintage distortion and dynamic vinatge with my ds an ultra mod and my mod TS9 Flexi dx by keeley crunchy mashed it to death. a long time I used the hi gain and fat gain in live but you realize quickly that it drafts
on the other hand with N2 boosts bass I was 6 presence was 6 and I have the sound of the album of extreme pornografiti
Small regret present in the breath disto

For over a year since I have and I regret it, but I have at least a year to find my sound
I like the 128 banks that use different sound and eq 9bandes
the fewer the comp, the noise, chorus, auto wah, which I think its really gadget
For I have not tried against his father mp 1 3TM mod but it says that good and I would like to see
The price is unbeatable quality rappport if you tore tunes and want to take a kind TriAxis
As against time can be that I took a non-programmable preamp like Soldano sp77
or his father 3TM mod
But for 100 euros I could not miss