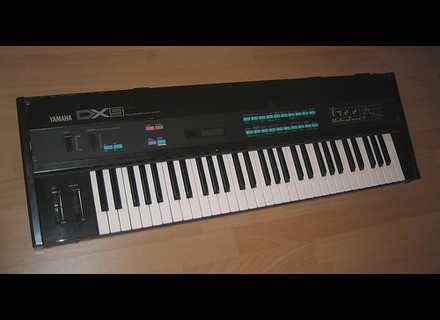 DX9, Digital Synth from Yamaha in the DX series.

bolinox's review (This content has been automatically translated from French)" well"

Yamaha DX9
4
digital synth.
I do not remember how many there are key. he is in his box and I do serves more.
5-pin socket twelve o'clock. small input jack for sound on K7. sustain pedal etc ...
pitch, breath control modul + (you blow into a device for modul, I personally find it pretique)
pure technical characteristics but I will not detail it has everything.

good interface to the sounds. must say it is as basic synth.
editing sounds is really special.
it works on algorithms with operator who deal with superposition, juxtapositions, etc .. 8 4 operators algorithms I think.
it's a little tricky at first but then it's really interesting to make sounds. I would even say it's more exciting. I APRIS much on the composition of a sound with it.
bank of 20 sounds if I remember ...
then to the memory of sounds it's really picked it up .. it is stored on k7 that is read by the dx. it is a bit more laborious it is very sensitive to the nival at the time of transfer. it often crashes. you can do the reverse: save your own sounds on K7.

not sensitive keyboard. sounds are good and varied.

I have since 1983 or 84 I know more. I play keyboard ... more
before I had the mythical juno6 (I'd like a still)
to sum up. if you have the opportunity to take a dx7 dx9 rather than do it.
for storing sounds, algorithms operators more, the touch-sensitive keypad and many other things.
Now, if there is a good price, it's an interesting keyboard.
can compensate for the lack of touch sensitive volume with a pedal. simple and reliable keyboard.
I do've never complained. (Except perhaps for the transfer of sound.)

daturableupetrole's review (This content has been automatically translated from French)" Why so hard?"

Inside, a memory for 20 tones. Each sound is created by 4 operators, these operators can be connected eight different ways .... I find, eh?

You can set the undulating sound with LFO produces 6 different oscillations.
EG to create a resonance effect
Portamento to link notes together.
And of course, all this is configurable.

Otherwise, no velocity or aftertouch (this is serious?)

I typed the doc and it is fairly clear for a beginner ...

I am more moderate than the other reviews on the use of menu. Indeed, the screen is small but the navigation button is fine when it was well integrated 2 main menus Edition (blue and brown on the synth), each function key is registered and in a logical order. Functions are found immediately after a few tests of its manufacture. There are also shortcuts to go from level 0 to 99 immediately.
Fun fast enough and you get to create very different sounds, we tamper, you go back, it's endless! 4 operators, that's enough!

So too, disagree with the previous review, where then it is a matter of taste.
I can reproduce the sounds of the organ 70 or electric pianos. Can be well wicked sounds, saturated goods or very soft sounds, crystalline. It can play with minimalist sounds very 8BIT!
Wheels pitch and modulation are efficient and responsive, you can really qualify.

For sounds, it will not be realistic but sounds oboe / clarinet or dings.
You can also make beautiful tablecloths.

Anyway a bit of fishing in all serious lack, I put a preamp and I just boosts the bass.

I bought it a month ago. I find the area of ​​the creation of his: it is exciting! I think this synth, although I have not used other background, does not deserve to be so wrong side ...
I can get sound to Metronomy or Depeche Mode or organ sounds like Pink Floyd.
So, I paid mine 35 euros! In average condition, keys not working, I thoroughly cleaned and it came back!
I have fun! 4 operators is, I think, enough to start and discover all the possibilities. In addition, I find it hard to criticize because I get sound I'm looking for!

squeaker squeaker! and ding, ding, dong, the program with some algorithms in less then even more insipid than the dx7.

Cumbersome but does not contain much. A scam at the time. Some bought it thinking probably have the equivalent of a DX7 which itself was not a matter for the discount over the years.
Past few synthesizers are over 15 years of 15,000 francs to 100 euros. This is the only thing remarkable series DX, their discount.

8 of 27 people found this review helpful

Yamaha DX9 manuals and other files