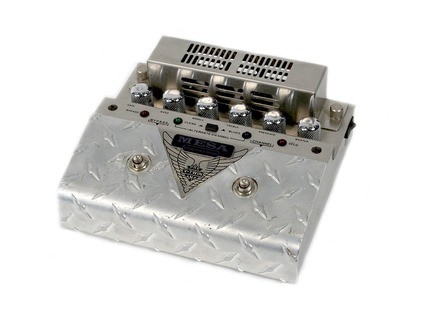 This is a wonderful pedal that I wish Mesa still produced. I found mine for an absolute steal, and sold it later for way more than I paid for it. I should have kept it - it is a great tube box. It is a dirt pedal that kept the character of the guitar intact, which is nice. With a direct out, 2 channels, super durable housing, the ability to switch up channel voicings, and a great EQ, this pedal has it all. The treadplate metal looks like a Dual Rectifier, and the pedal can certainly sound like one as well.

The V-Twin excels here - it sounds utterly, ridiculously good. It can get blues crunch, liquid sustain soloing, death metal chug, and about any point in between. The EQ is very responsive, and can carve a nice spot for the guitar (or bass) to sit. It has a ton of gain on tap, which is befitting of the MESA name. It sounds good just being used as a distortion pedal, but being that it is a preamp, it can run directly into a power amp, or even the PA system, as well.

I'm giving this all 10s, all the way across the board. This is one of the best distortion boxes ever produced. It is durable as all get-out, it sounds incredible, it looks like a work of rugged American art, and it is versatile. It's an investment even, as the discontinuation of it has caused it to rise in price. This pedal can make a boring one channel clean amp sound fantastic, and it can make a great amp just sing! I unabashedly love this pedal, and I wish I had another.

Mesa Boogie V-Twin
5
This pedal is basically a Mesa Recto preamp in a little box. You get most of the features you would see on a normal amp but in a small but larger size foot pedal.

The tone of this pedal is great. You get a very thick and fat sounding distortion that will sound great with just about any guitar and or any amp. This is a pedal that will take control of any guitar or any amp. It will dominate pretty much any setup you have because this thing is a beast.

Handbuilt in the USA

The tone is huge to say the least. You get a very thick crunch tone that is extremely close to a the sound of a Dual Rectifier. This pedal will greatly saturate you tone and thicken up the weakest guitar or guitar pickup in your arsenal.

This pedal is a great addition to any person who needs a fat sounding distortion who uses maybe Fender amp or Vox or just about any clean based amp. If you need a beefy steroid pedal than this is your best bet.

Another great thing about this pedal is the ability to use headphones or record out with it. SO you can send it to a recording console or the house PA system if you didn't bring your regular amp or if stage volume is an issue.

I don't think Mesa Boogie makes these pedals anymore. So the used market is the only way to go at this point. I think you can pick them up for around $350+ in the classifieds or used market.

Like an amp or a slightly more complex pedal, there's a few EQ options. There's also 3 modes, clean blues and solo. Solo would be the one having the most 'gain' while blues is just like a mild overdrive and clean of course is clean.

The headphone out is useless everything sounds like static crap coming out of that. The pedal itself is big and heavy! Comes with it's own adapter to provide proper power. You can use clean or ONE of the distortion modes, you can't layer them together, nor can you switch between the two with the footswitch. Which, hinders it's versatility in my opinion.

You can use this as a front end amplifier for whatever combo/amp you have backing or as an overdrive or boost to your original amp's tone. I've found using it as the boost was WAY more useful than as a standalone front end preamp.

The EQ is a universal EQ for all three modes, so it's simple yet not super versatile. You have to settle on one EQ setting for all your modes.

There is also a control for changing the clean's tone making it break up earlier or not via a trim pot.

Cleans: These are your classic boogie cleans. Not too shimmery, not muddy but smooth. I was never really a big fan of boogie cleans to begin with but this is usable and doesn't break up.

Blues: Offers a slightly bluesy crunch to your existing sound. Sort of like what a regular blues overdrive pedal would provide except with the preamp being tube, it's more compressed and smoother in tone. A little bit more organic sounding and not sterile or bitey like a blues driver for example, would sound like.

Solo: This is the supposed high gain channel in which, it's really not. It's more of a classic rock gain structure. For some reason when I bought this somebody suggested that it was a dual rec in a box. This is simply WRONG. The V-Twin is designed to achieve CLASSIC boogie sounds and by that I mean the NON-metal amps, PRE mark IIC+ era. And so the distortion is not high gain, it's full of mids and very smooth, for rock or smooth blues leads.

As a front end amplifier, I didn't like what it had to offer. The blues mode was decent, though I found more tone in the solo mode for blues. And when I wanted a rock sound I struggled. However, upon my frustrations I tried to use it as an overdrive, boosting the amp after setting it for medium gain distortion in solo mode, and WOW. Now THIS is what i'm talking about! What came out was HUGE distortion, dynamic, clear, high gain, thick, everything one can possibly imagine wanting for high gain purposes! It was huge! And I couldn't believe how thick the distortion was! Possibly due to the preamp tube design as opposed to regular non-tube overdrive pedals, but it was just overall WAY juicier!

It's decent as a preamp pedal, but even better if treated as a tube overdrive pedal for high gain stuff. That's where I was really impressed, although the design may not have been intentionally made that way. That's how I used it and that's how I liked it. But as for what it was designed for, I guess it was decent. I would recommend it as an overdrive but not as a preamp pedal for anything else.

There are better tube preamp pedals out there offering more variety in sounds and more flexible EQ options. This was a pretty limiting pedal. If it was designed with just the solo mode and it's EQ it would be an awesome overdrive pedal. But it's not enough to serve as an actual 3 mode pedal since the controls are so limited. So i have to review it quite low as I didn't like anything about it as how it was designed to work, but instead sounded great as something else.

Mesa Boogie V-Twin
5
Amplification: 4 Lamps, gain stages op amp, the distortion is obtained by saturation of the lamps. Therefore mixed.
Full of small buttons for the sound you want.
A first stage of the preamp output and a headphone output

No need for manual or just small nimble fingers to adjust the sound.
The sounds are impressive

The must-have for the player to greasy blues.
Nothing to throw in the resulting sounds.

I have 4 years. I played a bit of a Mark IV, and failing to be able to find a OCCAZ good price, I bought it. No regret, I care.
Of course, it is not easy to use live, or else should not have 36 sounds.
Since the release of this thing, Mesa turned to metalheads. This is the last winning shot Mesa for lovers of blues and rock. Since the new sound MESA me profondémment ch ....
So if you want a piece of the legend of Mesa, it is with that thing you can have, for lack of a Mark 3 or 4

7 of 11 people found this review helpful

Did you find this review helpful?yesno
»
Read the 20 user reviews on the Mesa Boogie V-Twin »