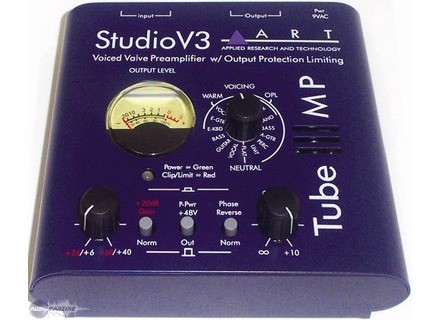 Art Tube MP Studio V3
4
After having recorded several songs with the Art Tube MP Studio V3, I must say it is a pretty good little piece of equipment. It's audio limiting system works best when recording semi-hot signals. However, there are a couple of reasons I didn't give it 5 stars:

- The paint on the letters is prone to come off (slightly, only superficial, but still)

- It doesn't have a built-in on/off switch

The way it limits the signal is similar to an ultra-compressor, so it is important to be careful not to record too hot (otherwise the dynamics can be affected in a non desired manner). Still, it serves the purpose of a single channel (MONO) pre-amplifier very well.

I will probably be making a video review and uploading it into my blog.
Did you find this review helpful?yesno
»

Art Tube MP Studio V3
4
This is what you might call the hot-rodded version of ART's famed, low-priced tube preamps. The hot-rodding here has to do with variable voicings, which means that you can change the way the tube affects the signal. I'm not sure exactly how they do this, whether they do it by modifying the signal itself with capacitors or by modifying the plate voltage in the tube or some other way, but it basically gives you a bunch of slightly-different midrange peaks to choose from. These are all labeled things like &quot;bass&quot; and &quot;guitar,&quot; but I usually just turn the knob around until I find one that sounds good for the signal I'm recording, and ignore the labels.

It's also got all the usual stuff for a preamp: phantom power on and off, boost, input level, output level, phase reverse. It has a cool analog output meter, though the input meter is just an led that turns green for signal and red for clip.

It's powered by a wall wart. There is no on off switch, so when you want it off you just unplug it.

This is one of those somewhat-controversial &quot;starved plate&quot; designs. This means it's not what is traditionally meant by a tube preamp, even though it does have a tube in it and it delivers what many would call authentic tube sound. Basically it's a solid state preamp which also runs signal through a tube. The way I understand it (I'm no expert) the voltage on the tube is lowered to make the tube work harder in passing the little bit of signal it's given. This imparts a little bit of tube warmth and distortion, like a traditional tube preamp being driven really hard.

In a traditional tube preamp you have lots of tubes and input and output transformers. This sounds a lot better, but can cost literally a hundred times what the V3 costs ($4000 rather than $40).

Many people don't like the whole &quot;starved plate&quot; thing because it imparts a kind of exaggerated tube sound. This can be good for some kinds of music and some kinds of signals, but not for all. It sounds terrible, to me, on the sound of a miced tube amp, because that sound is already plenty tube-y. It sounds pretty good on bass guitar when you're going direct, but less so on a miced bass amp. It sounds *awesome* on vocals.

The starved plate design can generate a lot of noise, so you don't want to use this on every track of an 8 or 16 track project, the cumulative effect would be really buzzy/hummy. I've had great luck using solid state pres on most things on a song and using this just on the vocals, though. It gives the vocals a nice faux-60s sound which, because you're using it only on the voice and not on the instruments, never becomes a sad parody of itself.

The bottom line is: This is a great tool to have. Only use it on one (or at most two) tracks on a given song. It sounds best on vocals, especially with a large-diaphragm condenser. Don't use it on anything you want to be really clean, or anything that is already being tube amplified (i.e. electric guitar). It tends to make acoustic guitar sound really unnatural, but not unpleasant.

People who complain about this thing are usual mad because either 1) they think it should sound like a $2000 &quot;real&quot; tube pre, or 2) they are using it on everything and don't like the amount of noise this generates. Use it once in a while on something you want to have a distinctly and unnaturally warm tone and you'll be happy with it.

-Livingroom-'s review (This content has been automatically translated from French)" One of the best preamps cheap."

Art Tube MP Studio V3
4
Preamp format "DI", a lamp Chinese 12AX7 format different voicings controlled by a rotary switch, an input output (XLR or jack size for each of them), an input, an output, phantom power, a push-off phase, a 20db boost and roll youth! On paper it does in all cases. But the power supply 9 v can be scary, because we know that the lamp will not work as it would on GoldMike example.

We find quickly what you will, between limitation and simple préaplification. Chinese original lamp is rotten (along a preamp 50balles should not expect a mullard), I have changed to a lamp OUR sorted, and it's going much better since.

With my new lamp, it provides a perfect warm color to record low. To be brief, if you have a class A transistor preamp to your sound card, it will be a perfect companion for the home studio.

I use it for a year or less, I like its small size, the DI side, its price after it's not worth a real tube preamp but it's a small effect, for once the lamp is not just marketing.

Did you find this review helpful?yesno
»
Read the 22 user reviews on the Art Tube MP Studio V3 »