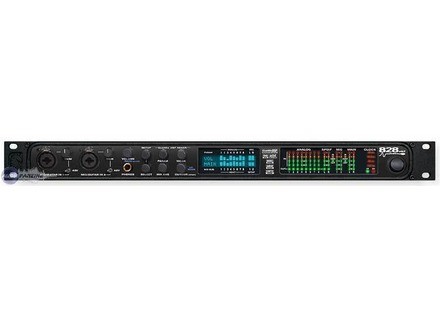 All parameters can be modified/configured from the front panel or using Cue-Mix software.

My Absolut's review (This content has been automatically translated from French)" Very good bike!"

MOTU 828 Mk2 USB2
5
Complete configuration genuine Swiss Army Knife! Yet I have an old PC shit I never had a problem. There is everything you need!

Scores of 2 or 3 buffoons who do not care for 0 stars are really shameful.
This is a super nothing to say, it must fairly short time and then USB 2 is rather rare.

Especially not in use DRIVERS supplied with the card go directly to the site. Updates totally nikel!
I am the 14 tracks no prob, we can go further, I did not need.

Latency is very minimal, but you still need a good bike in the ass!

At first it is heavy then ok we just fiddle the machine for hours but all through the bundled software including MOTU Audio Console.

Not harder than others.

The manual is good, but I knew without him.

Bhen for the price nothing to say.

Yes I change there but for the high range.

Ceddie1974's review (This content has been automatically translated from French)

MOTU 828 Mk2 USB2
5
- What characteristics have motivated your choice?

Choice made for the following reasons:

We have a HS team around a PC desktop and a laptop to repeat and Live.

- Which instruments and systems (console, preamp, DTD ...) you use it and how connections? ...

- The installation is done it without problems?

You follow the instructions exactly and after 5 minutes and 47 seconds, it turns!

UPDATE: small problems encountered in the install on our notebook. Windows stubbornly refused to automatically install the drivers. Thus, the simplest method is to go to the root of the CD and launch the Motu and setup.
- Have you experienced any incompatibilities?

Update: for the sake of precaution, I always disable the integrated sound drivers to my computer. But paradoxically, the card worked less well on the laptop when I mute the built ???!!!- The general configuration is easy?

Not really! This card is full of features. The complete beginners in computer music may have some difficulties ... hence the interest of the manual (in English) and forums!

Update: French manual is in the Program Files folder on the computer in the folder Motu. We must know ... Manual focus is the Firewire card ... This does not change its operating principles.
- The manual is clear and sufficient? ...

- The drivers are stable?

- Are they often updated?

Not ... proof of stability is not it?

Update: The lite version of Cubase that I was clumsy and boring ... I am decidedly not a fan of Cubase and its logic. I reinstalled it ... Sonar and drivers walk great!

Not look ... but apparently very low!

Update: by pulling the rope to the end ... I get to be 3 ms! Excellent!
When the monitoring is zero latency through the DSP board! Really comfortable and worry-free!

A few hours! I had to have it for 2 months without major setbacks with the French importer ... below all over their German colleagues!

Update: now 15 days ... and this is another world! I find joy and happiness of the gear used in a pro with logic pro and a great quality!

The sound! She potato! Really!
Manufacturing: the solid (with a few knob)
The fonctiosn advanced to completly as the only limits the imagination!

Update: from my flats, I would say the complexity to properly use the front! The preamp beautiful but not very powerful. A preamp for the voice is being purchased to compensate! But our musician haunted by agreeing!
- Have you tried many other models before buying it?

France: frank way! All the turns like a rumor which the French importer should raise prices! The general anything when we see the opposite happen in Germany! In short, great price / quality ratio in germany!

Update: France, again a rip-off compared to the German prices! On inquiry, I am entitled to the support of the importance of German speaking guy who has a hotline to provide for French customers of German mag! Distribution UM can go get dressed ... especially when one reads his written warnings in red on his site when buying abroad! If it&#39;s not Charlie, I do not know what it is! -

For now ... yes ... I am rarely excited for stuff other than my guitars ... there, it opens the door to work and sound pro! Now for me to be up and fully exploit the information!

Update: from discovery to (the use of four can mix on the map - registration of preset mix - the sound - the sync and so on) ... I regret my purchase even more! Top!
IMPORTANT update from 08/01/2007: previously I&#39;ve always met more or less concerns of drivers with this card ... in fact she spent periods of very stable then suddenly, for periods of instability Total (rebooting the card to restart the drivers etc) ... short, I got tired and I recently install new drivers for Vista betas (compatible windows xp 32 bit) and the Miracle ... no problem! The map is now swift and effective! A board so ... install immediately if you notice any problems with the drivers end! The betas are better! Paradox is not it?

riz's review (This content has been automatically translated from French)

MOTU 828 Mk2 USB2
5
With all its inputs and the reputation of the brand, I did not choose that one second hsit MODEL. Mainly to the components in computer music is the flagship product.
My config is composed of a AMD dual core proc 2.3 Ghz, 4 GB and 250 GB hard (to have no worries, c config IDAL).
My card is connected to my synth Juno-D, a recording studio BOSS, the monitors KRK RP5 and an EMU midi keyboard. Jack and RCA connectors.

The installation is done without any concern for Vista. The manual is clear and you can even do without it.

St stable without drivers updated. I work on Live, and native instrument with a 5ms latency inf.

I have been using qques weeks. Its robustness and style make this card a trs pro tools. The price is excessive but you know what you want. Self sth of stable and quality and we trankil for a while, so cheaper and with concern tt the four mornings. I would do the same choice without pbleme.

scootchy's review (This content has been automatically translated from French)

MOTU 828 Mk2 USB2
2
I was looking for an interface that combines the quality preamp (to avoid buying an external preamp), a headphone jack pro, and routing functions

I would advise simply avoid buying a MOTU to a pc.
I t affected by the renaming of MOTU, yet left for the pure hardware, I do not think this will rename MRIT.

Support slow-trs: I reu THE FIRST rponse 3semaines APRS my first post, and it's never a Premire rponse me good advice Reinstalling the product.

Systmatique-click when playing a sound file, and loss of random image

- Drivers unstable
- And few days up

I test the preamp, I t's a little bit, you have to climb up and gain, and I use the same preamp prfr the M- Audio Fast Track Pro (which has even no external power supply)
However, we can not say that the sound away from the silent bad but I am not impressed and t vis - vis a, do not recommend buying either.

I put 4 for complete information I can give for not tried.

Stays in the top of Audiofanzine I t of this map.
I dplore also the fact that customers reporting the problem is not harder on MOTU. For that price, I think the media could be more effective and should not be a user who attempts to bring the solution, anyway, thank you for them.

I congratulates all of the same quality of the headphones.
Did you find this review helpful?yesno
»
Read the 9 user reviews on the MOTU 828 Mk2 USB2 »