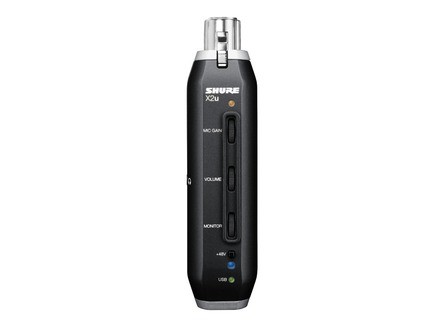 Shure X2u
4
The conversion possibilities are limited to XLR to USB. It's an Analog to Digital conversion, with the ends being XLR and USB respectively.

I bought this product to see if it was easier and less of a hassle to set up, use, and maintain than an interface. I had owned two interfaces and a mixer previously, and it wasn't easy to maintain them, as I had to install and reinstall drivers, they kept coming loose, lights kept burning out, and the like. I decided to look for a small product, much like many people go out specifically to get an Mbox USB just because it serves its purpose in a small package. All in all, it's a loud, clean sound.

First, I've tried various other models out at the store and around at friends' houses, and I have to say, this is the best one I've tried. With regards to all the uses of the thing, I cannot find a use that it doesn't excel at, whether it's rap vocals, singing, or simply voice recording. With other models, they either had extremely high latency or weren't loud enough. Also, this little thing has a direct-monitor feature, one feature that one should note. To make the sound out of the other models hotter, one would have to compress and normalize a whole lot, which is something that a customer shouldn't be forced to do if they're supposed to be buying a quality product.

One thing that I noticed while using this, however, was if you turn the gain up a tad too much, you get a lot of noise. The switches on the thing aren't very intuitive, as a lot of the time, I couldn't tell if I was turning the volume up or down. This is a technical flaw and a design flaw on an otherwise flawless piece of handiwork, which brings me to my next point of interest: the design. One thing that I simply must point out is the extreme HEFT of this thing. It's a big, metal, fairly heavy device, which is all the better in a studio that is slept in. It gets pulled off of my desk all the time, and it still holds up great.

All in all, this little device is not to be overlooked. It's something that could easily become an integral part of any studio.

Published on 07/07/09
Shure Incorporated today announced that the X2u XLR-to-USB Signal Adapter is now shipping and is available by itself or in bundles with either the SM57 or SM58 microphones.