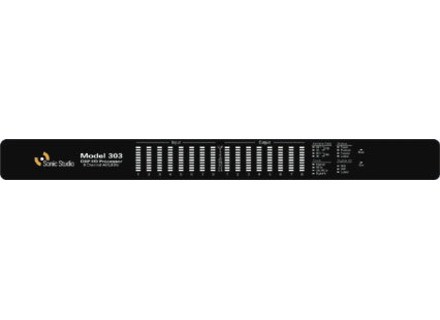 Sonic Studio Model 303
5
The Sonic Studio Model 303 is an eight channel AES/EBU audio interface. It's for use in studios where converters are already present, and comes with the Sonic Console software for controlling effects and the like. It gives you a ton of DSP processing power and the software has 50 plug-ins to work with. This is best suited in a mastering studio rather than anywhere else, and that's where we've got it at the studio where I work - in the mastering room. It can support sampling rates up to 192 kHz and has 16 inputs and 18 outputs in total. It is rack mountable and will only take up a single space in a traditional racking system.

It's not totally hard to use the Sonic Studio Model 303, as it's really the software that takes some effort to get used to. Once you have the interface set up, it's pretty much good to go and being manipulating the software there's not much to go along with it. I haven't seen the manual however, so I can't speak to it's make up.

The Sonic Studio Model 303 is definitely going to give you some of the cleanest AES/EBU channels possible. Like I said earlier, it's not best for tracking or mixing room as it's definitely at the quality where it's going to be best suited for mastering purposes. The mastering engineer at the studio where I work uses this and the software in tandem with Pro Tools and other interfaces and converters. The Model 303 is going to be the perfect basis for any mastering room...

While expensive, it's hard to go wrong with the Sonic Studio Model 303 and the Sonic Console software that it comes with. For mastering it's definitely the best AES/EBU system that I've seen and will bring up the standard of any mastering room. Of course there's a ton of other super high quality equipment you're going to need for a professional mastering room, but the Model 303 interface from Sonic Studio is a great choice for an interface...
Did you find this review helpful?yesno
»