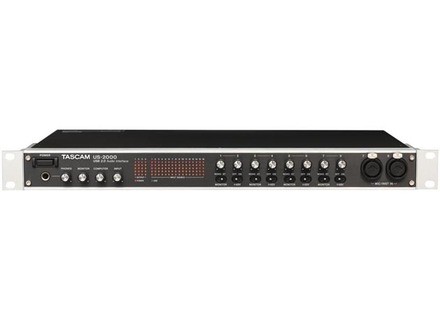 US-2000, USB audio interface from Tascam.

Tascam US-2000
5
TASCAM US 2000 - great product and features, even better price. The TASCAM US 2000 is a USB 16 input 4 output analogue to digital converter. This audio interface takes up just a single rack space where others would fill at least 2. With a street price of about $400 USD it's pretty irresistible.

The US 2000 was an obvious choice for my needs. I wanted at least 8 pre-amped channels, however my biggest need was more than 2 outputs. When I realized the US 2000 had 6 TRS inputs on the back I knew I had to have it. This gave me the option to pretty much mic up a whole 5 piece rock band into one single rack space unit.

The US 2000 features 16 inputs, 8 pre's on the front, 6 line in on the back + 2 digital. Competing models tend to only have 8 pre amp inputs, and if you've recorded a drum kit, 8 inputs gets used up pretty quickly. The extra 6 line inputs on the back of the TASCAM US 2000 really come in handy if the drummer decides they want every drum mic'd, AND every other surface in the room. Seriously, 6 extra inputs can really come in handy. They also allow you to bypass the built in preamp by going into the line input. All line inputs have a handy -10 - +4 dB switch, great for hot signals. Each pair of inputs has a stereo switch for stereo recording. Phantom power can be applied to each of the 4 preamp pairs.

4 output heaven. Wow is this useful, and a major selling point. Many other similar interfaces tend to only have 2 output, which are used by the monitor. This limits your routing ability severely. No one wants to have to patch their outputs from their monitors to the piece of outboard gear they want to use. Having a 3rd and 4th output is what sold me on this unit. Not only can I put a track directly into my pieces of outboard gear, I can have 2 independent audio signals routed out while the music is playing in real time. Say I have a drummer and he's the only one who wants to hear the click track, well I can put the click through output 3 and then patch that into his headphone mix without the rest of the band hearing it! Little things like that prove the extra 2 outputs usefulness. In addition to 2 outputs dedicated to your monitors, there are another set of outputs that playback what is going through the monitor output. Think of it as a splitter of your monitor outputs so that you don't have to patch into the monitor output line directly.

Lets not forget about the 2 XLR/TRS inputs located on the front of the US 2000. This is really handy to have for the person who doesn't own a patch bay. Gone are the days of maneuvering behind your interface just to plug in a guitar for some late night recording. And with the dual TRS/XLR input jack, won't have to play with a mess of adapters to make your connection.

Time to talk latency. The US 2000 allows you to directly monitor within your interface, that's right, no more crashing your DAW just because you want to hear what you are playing. Keep in mind the individual track levels of the input can't be adjusted. In the TASCAM US 2000 control panel for windows you will find latency settings, however on a mac latency is determined by the application being used. The dedicated input monitoring provides no noticeable latency for the user. This is one of my top 5 favourite features of the US 2000.

I didn't have any compatibility issues when I first got the US 2000. When I later installed Mavericks the US 2000 wouldn't connect. Luckily the hard workers at TASCAM had a Mavericks driver ready to be downloaded, problem solved. Set up itself was very easy. Being on a Mac, I just downloaded the driver, installed it, connected my unit and then turned it on. Just like that I had a new prized interface.

Like any manual it will be confusing to someone who doesn't know much about that type of gear. For a seasoned veteran it is well put together and a great reference.

The TASCAM US 2000 was about a 8/10 when it comes to ease of use. Any interface is going to have its learning curve, but for the experienced user diving right in won't be a problem.

What Bang for the buck. With an average price of about $400, the TASCAM US 2000 was not a hard decision for me. I got 8 preamp inputs, 6 line inputs, 4 outputs with USB all for around $400USB, and it fits all into one rack space.

I really like the sound the preamps deliver. Lots of headroom but the amplification doesn't sound forced or thin. The 2 insert connections for channels 7-8 allow you to easily mix in a piece of outboard gear to the top of the input chain. TASCAM didn't sacrifice quality when they started making more affordable models.

This is ideal for the compact/mobile recording studio that still wants the options for many inputs without the weight or extra gear/wiring. Your home studio definitely wouldn't suffer with the US 2000's 2 extra independent outputs, you might even make a drummer happy! The TASCAM US 2000 is the perfect fit for someone who wants a reliable, compact recording interface, with options that rival models don't have.

Tascam US-2000
4
The TASCAM US 2000 is a pretty more souped up version of the popular US 1641. The appeal of these Tascam interfaces hits the same spot with everyone every time. They offer so many channels for such a rock bottom price that you just cannot pass it up! Right? One thing that the Tascam US 2000 is strangely lacking however, is MIDI. I am not quite sure how it did not make it on there, but if you take one look at the interface, in typical Tascam fashion, this company seemed to not waste any space. In fact, I am quite certain the people over there are neurotically obsessed with making the interface look as busy as possible, because that is certainly the impression that the US 2000 gave to me! Unlike the 1641, most of the microphone inputs are located on the back, which may make more sense in many applications.

What I did find incredibly joyous about the US 2000 however, was its method of monitoring for headphones. On a budget interface, you would only expect to see a knob that controls the ratio of monitoring sound coming from the computer verses the combined inputs. However, the US 2000 generously allows the user to set both volumes separately, which means that fiddling with knobs to strike the perfect balance between volume and ratio is a thing of the past! This is unlike the younger cousin, the 1641, which I am consistently bothered by on a day to day basis. I also find the meters very useful for maintaining balance when recording.

The drivers for the US 2000 are a dream and run incredibly smoothly. Thus, this audio interface is just like any other proper interface. Works. No questions. No need to explain.

The preamps on this are a little bit better than that of the 1641's I have observed. They seems to have a little more excitement and energy. However, that is not even the main draw. To be truthful, the lack of midi makes syncing latencies when doing midi a little bit frustrating, and that is why even with all of its improvements I cannot truly recommend the 2000 over the 1641 or the 1800.
Did you find this review helpful?yesno
»

bassiste49's review (This content has been automatically translated from French)" Top!"

Use to record rehearsals and models

Updating drivers 32-bit to do, it's better

With Cubase LE5 it works great. Config cheap and convenient.

Nickel, everything is easy and well explained, succinct and practical manual.

A remake without hesitation. My old Hercules 16/12 FW dropped, I went in with some concerns about USB latency, which quickly disappeared.

Run, this is good stuff

Tascam US-2000
I needed to quickly replace my MOTU 828 MK2 deficient. Taken by considerations of drivers (I'm still running XP 32-bit), I needed a machine that gives me at least 6-channel input line, the driver is compatible XP 32-bit ... Sevice Pack 2 because Service Pack 3 is not compatible with my configuration (I am one of those few users in the world, for whom there is no solution to this particular problem, without having to go through the installation of a new version of Windows with the risk of losing the use of a number

I can not answer that in a comprehensive manner in the dedicated field below.

I can not answer that in a comprehensive manner in the dedicated field below.

So I use this USB interface for just one month. So I give you the
following observations. (For those who have mastered some English, here is the link
a page that will provide additional explanations: https://www.gearslutz.com/board/music-computers/497758-tascam-us-2000-installation-operation-issues.html)

This card is strongly discouraged! It is unstable and does not allow the most basic acts.

It is hampered by antivirus software and prevents de facto surf the net
without the risk of disabling the antivirus.
If I go on the net anyway (keeping my active virus) as the US-2000
disconnects regularly, I have to close the "Plugin-Container" Firefox service in
the windows task manager, and reload the page I looked for sound.

She is upset by the NVIDIA chipsets and gives BSOD repeatedly, if it is not connected to its own USB circuit (must then add a USB card which will be dedicated).

She is unable to work in stand-alone, for without USB connection to Windows, the audio output circuit is silent, although input channels work, as evidenced by the meters. I say "contact" with Windows, because the simple fact of being connected THE COMPUTER is not enough to make it usable: it then offers the sound of a device with batteries
are almost dead, and delivers extremely low and saturated sound.

In addition, the US-2000 regularly loses this "contact" with windows, and I have to turn the U.S. in 2000 and then back on for it to appear again in the audio devices available.

This same phenomenon occurs in launching Native Instruments Kontakt: the US-2000 disconnects from Windows making de facto use Kontakt impossible.

Logic Audio often plant and fige.Je I realized that turning off the US-2000, Logic Audio is "unblocked" and closed normally and running smoothly as the US-2000 is turned off or disconnected from the computer .

With Adobe Audition, some ASIO settings do not work.
In addition, MME, Hand-Out output IO appears well (unshaded) in the choices
proposed, but remains unusable.

In the instruction manual that came with this card, it says that this functional machine could not be tested on all existing configurations. Admit.
However, even with a conventional configuration based on NVIDIA chipset rependue strong, she is unable to function normally.
I said that installing the latest drivers and update firmeware provide no solution.

Suffice to say that this card is useless, because even if it works at times, it is impossible to carry out work to the end.

It is impossible to issue a reasoned opinion for this card, because why would it, it works more or less, to appreciate the different criteria. This is not the case.

Also, work is done (good or bad) or does not. With this card, it does not happen if I had to put a number to the card, it could only be zero.

Did you find this review helpful?yesno
»
Read the 7 user reviews on the Tascam US-2000 »