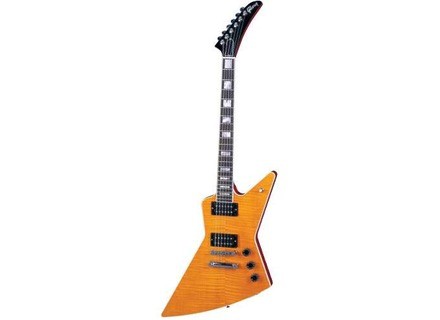 Gibson X-plorer Pro
3
The Explorer is a classic design now. It was first produced in the 50s and quickly discontinued. When other companies like Hamer started reissuing the design Gibson said "Hey thats ours" and put out an official reissues in the mid 70s. They have been making it ever since. There are a few variants to the original reissue, and this is the Explorer Pro variant. The Explorer Pro is an Explorer with a smaller design. I guess some people didnt like the big shape or weight of a normal Explorer and Gibson bowed down to them. Along with the smaller body you get a natural finish with white binding. Apart from these features and the smaller shape it is pretty much a regular Explorer. It has a big mahogany body with a mahogany neck. The neck has a set neck design. The neck has a 22 fret rosewood fretboard with dot inlays. It has two standard Gibson pickups. I think the neck pickup is a 496 and the bridge is a 500. You get the standard Explorer controls with two volumes and a master tone with the pickup selector being out in another state in the lower bout.

With the smaller body the guitar is a little lighter. The shorter horns means the guitar is a little easier to move around as well. It is not a big difference. If you dont like the Explorer shape you still wont. The neck profile on this guitar is a pretty normal profile. I dont like to get into detail on neck profiles if it feels normal to me its normal. If its extremely big or small ill notice it. Gibson fretwork nowadays is pretty good due to the Plek machinei they use. They put the guitars into a machine and it levels the frets better than any human couid.

The standard Gibson pickups in this guitar give it a standard Gibson tone. The Explorer usually has a fatter tone due to the huge body. They have a true Gibson like tone. The neck position is pretty smooth but has good bite. Not having covers on the pickup gives them a bit more top end bite. The extra bite means you can go farther without the neck position sound getting muddy. The bridge pickup is nice and crunchy. You can really rock out with it. It has a real classic rock voicing.

I dont really see the reason to get this model over the normal Explorer. Maybe if you have a bad back or something. If you want something even lighter you can get that gimmick Holy Explorer where it is just the outline of an Explorer. Being more limited than a normal Explorer it is probably more expensive as well. Overall unless you can get a good deal on one of these I would recommend the normal 76 reissue over this version.
Did you find this review helpful?yesno
»

Gibson X-plorer Pro
4
A 1988 beauty made in the USA. This is an older Explorer Pro with a 10% undersized mahogany body and normal neck, 24 jumbo frets on an ebony fretboard with killer split diamond inlays, one bridge pickup (a non original EMG 81) and one volume control, tune-o-matic bridge with string through body.

The guitar neck is nice and slim, like a 60's LP carve, but a bit thinner after the 12th fret and up. The neck combined with the lower horn cut away provides very good access to the upper frets.
The guitar is limited in the sounds it can produce because it only has the bridge pickup and one volume control.
The 10% reduced body makes this more ergonomic than it's regular sized brothers. I found it to have a nice balanced weight.

I used this guitar with custom built Peters amplifiers, which are kind of a cross between a Peavey 5150 and high gain Marshall/VHT with a little Boogie thrown in. The amp was paired with an Avatar 4x12 that had Celestion G12h -30's and a Splawn 4x12 with Governor/ManOWar speaker combo.

I usually go for a nice thick Jerry Cantrell AIC tone, to use with my modern rock/metal band.

The guitar had a very focused sound that all mahogany guitars seem to have. It was nice and balanced all across the frequency spectrum. It held up well with high gain lead and rhythm playing. The EMG didn't clean up very well for clean sounds.

Overall this was a nice guitar. I bought it used, so there were some dings - but nothing too bad for being 20 years old. The guitar had nice sounds across the board with distortion and useable sounds for clean, due to the single EMG pickup.

I liked the neck carve, the weight and distorted tones the best. The cleans were passable.

For being used, the action, fit and finish were very good.
I have been through many guitars and had a number of years where I would buy, try and flip, which enabled me to have many guitars around to try out.
I bought this via the internet and was not able to play it before purchase. I bought it because it looked cool and had a good price and I knew I could resell it without too much of a problem.
In the end, it was too limited in sounds without having a neck pickup and it seemed to be very small when strapped on, I think I would have liked the regular sized better.
Knowing what I know now, I would have passed on buying it, even though I broke even.
Did you find this review helpful?yesno
»