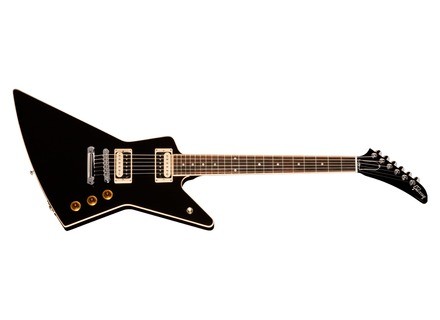 Gibson Explorer Traditional Pro
5
Exclusive to Guitar Center. Gibson's Explorer Traditional Pro features a solid mahogany body, 60's slim taper neck, and a rose wood fingerboard. As for electronics, the guitar has a '57 classic in the neck and a burstbucker iii in the bridge position, both sporting exposed zebra coils. Although the scale length remains the same as a regular explorer (24 3/4") the body is reduced in size by 4% --lending it a very compact feel. I very much enjoyed the wine red finish and appreciate the bound body and fretboard, appointments typically not seen at this price point for Gibson USA models.

The plek'd fingerboard translates to great playability and feel. The reduction in size feels exaggerated by the shape making the guitar seem very light and easy to get around. The neck profile feels very good in the hand and allows for quick position changes for those with medium sized hands. Tuning stability was very good, i felt very confident with the equipped grover tuners and felt no need in replacing them.

I played the Traditional Pro through a Mesa boogie Royal Atlantic. Mesa 4x12 combo. No pedals.

The pickups are very hot. Played through a el34 based tube amp, I could easily get both bluesy and searing high gain tones from the combination Gibson provided. The coil tap feature was excellent and allowed for very nice single coil tones, before unheard of from an Explorer body.

It's the nicest iteration of the Gibson Explorer series since the E2 models from the early 80's. The Traditional pro is essentially a reboot of the 2007 GOTW explorer pro's, featuring updated electronics. At $200 less than the typical explorer, it's great value for money. It can be noted that not many of these guitars are circulating in the used market.
Did you find this review helpful?yesno
»