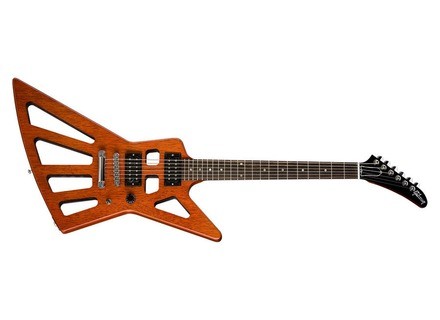 Gibson Holy Explorer
3
The Gibson Holy Explorer is one of their Limited Edition model guitars that were built with unique features such as finishes, different pickups or other things that might be deemed as wild or cool. The Holy Explorer takes that to a rather odd extreme by cutting out many pockets of wood from the body. It contains seven different holes that go all the way through the body, each of varying sizes and shapes. It's also got a very thin finish a-la the Faded series Gibson as well. Otherwise the features conform to the specs of the regular '76 reissue Explorer, except that it doesn't have a pickguard.

It features a mahogany body and neck with a rosewood fretboard, 22 frets, dot inlays, Grover tuners, tune-o-matic bridge and stopbar tailpiece and dual Gibson humbuckers. This particular model is loaded with a 496R in the neck position and a 500T in the bridge position. It was made in Gibson's regular USA plant in Nashville TN for the year 2009.

This guitar despite having several pockets of wood removed from the body is no more ergonomic to me than a traditional Explorer guitar. It's a bit lighter due to the reduced amount of wood, but the general shape is still there, so it's not like the ax is any easier to hold or play. The upper fret access is the same as a regular Explorer - decent but not the greatest in the world.

Getting a decent sound out of this guitar is a tad more difficult in my experience simply because the reduced wood mass gives it a tone that loses some body and low end compared to a typical Explorer, so it makes getting tones for rock or metal a little bit harder to achieve overall.

I've tried this guitar through various different amplifiers from companies like Fender and Mesa Boogie and have concluded that the guitar for the most part sounds like a thinner and more hollow sounding version of the Explorer. The signature Gibson bark is mostly there, and the guitar has a fairly cool thing going on for classic rock tones, but for harder rock and metal sounds it just doesn't have the tightness or punch in the low end. I find the same problem with the chambered Les Pauls too - the tightness factor isn't really there. It might be to a player's advantage to get this guitar if you're looking for a looser, more wooly sound. The cleans are nice and bright, good for funkier sounds, and the drive tones have a decent top end focus that's great for classic rock textures.

All in all I think the Gibson Holy Explorer is an interesting yet really weird thing for Gibson to produce. It's basically a typical Explorer that has these strange cutouts and a tone that's definitely lighter sounding than its regular counterparts. They were a limited run and didn't sell all that well when new which isn't really surprising given the odd appearance...
Did you find this review helpful?yesno
»