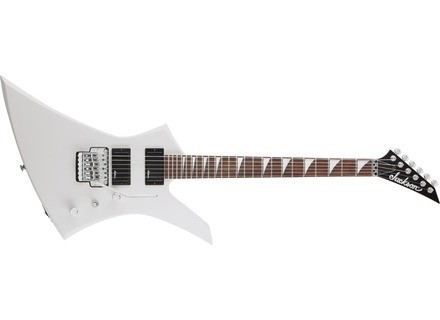 Jackson JS32 Kelly
3
The JS32 series is pretty cool for the price, but there are a lot of things about them that can make them a bit hit or miss at times. They're not the worst guitars that Jackson makes, but they're also not the best. The guitar features an alder body, a maple neck with a rosewood fretboard, 24 extra jumbo frets, sharkfin inlays, a licensed floyd rose bridge, two humbucker configuration, one volume, one tone and a three way switch.

One thing about these Kellys is that you have to like how they feel. If you're a fan of Explorer style body shapes, you'll probably enjoy this guitar. The fretwork on this was pretty good. The frets weren't perfectly level, but they were decent enough to where it would be fine for most people. If you're into micro-action, it'll probably need a fret level. The floyd rose on this is a licensed bridge, and it's not as good as the higher end bridges. If you're planning on keeping this guitar, you'll want to replace this bridge with something else. One word of advice: if you do decide to replace the bridge, replace the studs and inserts. They also attribute to tone, and the bigger floyd ones are a bit better sounding, including more robust and allow for finer movement, in my opinion.

This had some passive pickups in it that I think were meant to sound like some of Jackson's own signature pickups. There are a few Jackson pickups that are quite well received. However, these aren't some fo them. These are very bland pickups that seem to lack all kinds of character and don't really deliver in terms of clarity. The bridge is pretty much a mess in terms of frequencies. The neck didn't do anything for me at all. I wasn't able to get that smooth lead tone I wanted, and cleans sucked as well. If you're going to keep this guitar, a pickup swap will be needed.

The Kelly shape is a unique take on the Explorer, and not many people offer guitars like this. As a result, you're forced to stick with Jackson for the lower end guitars, and I don't feel they're quite as good as, say, ESP's LTD line up at around the time price. That said, if you find a good one of these, it can be a decent player.