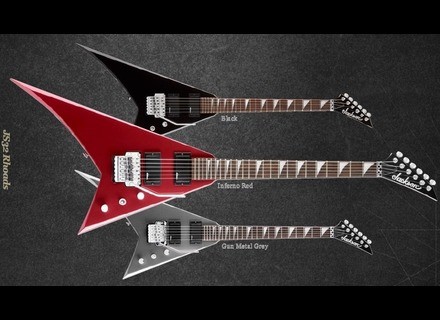 Jackson JS32 Rhoads [2010-2012]
4
This is a guitar in Jackson's lower priced JS series. It's a Rhoads styled body, with the asymmetrical V-like shape. If has a maple bolt-on neck, an Indian Cedro body, and a Rosewood fretboard. It has 24 Jumbo frets, and Jackson Shark Fin inlays. It has a Two-point, Jackson Licensed Floyd Rose style double locking Tremolo. The nut is a Locking Jackson Licensed Floyd Rose nut. It has two knobs, a volume knob and a tone knob, which control both pickups. It has a 3-way toggle-style pickup selector switch. Position 1 is neck, 2 is both neck and bridge, and 3 is bridge pickup. It uses Jackson CVR Humbuckers, and Jackson tuners.

It is very easy to play this guitar. The Fretboard has the standard Jackson compound radius, 12 to 16" (304.8 to 406.4mm). The neck is thin and a dream to play on. It is one of the best playing, lower-priced guitars I've played. As with all V's, it can be hard to play sitting down if you don't play in the Classical position, but I normally play like that sitting down, so it's not an issue for me. It is very easy to get a great sound from this guitar. The Jackson licensed Floyd is one of the best Licensed trems out there in my opinion. Very easy to set up, stays set up as long as you don't do anything stupid, it built great and uses quality parts, and keeps the guitar in tune, even through Slayer-style, Whammy bar abusive solos. Shredding on this guitar is a breeze, as is riffing. It's well balanced and is not prone to neckdives.

It is very, very easy to get a good Rock, Hard Rock, and Metal tone, clean or dirty, from this guitar. The humbuckers have enough bite to cut without being harsh, and there's enough bass to keep it sounding warm, but not flubby and muddy. They're high output, great for distortion, but the cleans are nice as well. I always use the bridge for distorted riffs, and the neck for leads and cleans. The pickups are clear, articulate, and made for metal. What more would you want from a Shred guitar?

This is a metalhead's guitar. Perfect for any type of metal. Very easy to shred and riff on. The neck is the best in the business. I love Jackson necks. This is a great guitar for those who can't afford one of the higher-end ones. Solid build quality, great quality wood and parts, and just good quality in general. Great guitar for an even greater price.
Did you find this review helpful?yesno
»

Jackson JS32 Rhoads [2010-2012]
4
Jackson JS32 Made in Indonesia
This is a Rhoad with a Floyd Rose licensed.
The bolt on neck is rather thin, flat with easy access to acute. Normal given the shape of the guitar.
We play with 24 frets, pickups are passive brand. (CRV2) A in the neck position and the other in the bridge position.
Found at a volume knob settings and tone. A 3-position selector allows you to choose the guitar pickups.
The finish is more than adequate even if the visible traces of primers. Should board behind.

It straddles the beast and ... it is light, love my aging back. But suddenly I have a sense of fragility. The front falls a bit when you play standing, but I've seen worse.
To play sitting on the dock the V between her thighs, the coup was over in the air shaft that is closer to our eyes. Good to train fast Thurs
The right hand naturally finds its place with floyd well made, precise and progressive with the ability to back up properly. The knobs are well placed but the rod gene vibrato access selector just like my Lag and many others ...
Left hand, it's Jackson, so the handle is a highway ... yes but ... yes but that was more than true in 1990, where the frets hang on the sides because they may be beyond a quarter of a microphone but it slips mm not alone as in my Lag AK200.
In addition, not slide well on the frets, it looks like they need to be "lapped". I have not as easily as I'd expected. After that, I'm a picky eater anyway.
That said access to the treble is a remarkable ease, nothing to do with my Les Paul. But Les Paul is a Les Paul.
The simplicity of this guitar makes it easy to understand how it works. And we easily get a good sound ... but no more.

This guitar is made for the metal. Well yes micro are high gain, but they are desperately short of grain. So, I find them a bit bland in saturated conditions. Yet I play a peavey 6505 + ... How heavy. Harmonics do not whistle as easily as I want. I confess that I am struggling with a regular SH13 dimebucker mounted evil Lag and SD alnico pro II my LP.
If they are well balanced, compare what is comparable!
Are clear sounds rather dry, but fairly well-defined law. A small delay over and takes on the scale, it becomes music.
Crunch we keep it a little neutral side.
I plan to place a small SH8 invader in there because I am convinced that this guitar can withstand good microphones.

My wife gave it to me for my birthday, I've had 15 days.
So it is a hot test, but with 4 repet. 3 hours each in its strings.
Wholesale foutage Hangover Thomman or Jackson with a set of rope separated because the ties were different.
I spent two hours to adjust the spring tension Floyd and height. And I expected but I think the race will be entitled to a small adjustment too.
All that is not normal, is it ok to start a mid-range but there ... the guitar comes fully deregulated. Jackson announced that the guitar comes with strings 10-46 but this is false. Whose fault?
This guitar is in relation to its price, it has a good foundation to evolve at the microphones because it's worth it ... A bit like Loreal ...
The look, playability, build quality is everything, apart from two or three little things that prevents it from being at the top.
But once upgraded ... BANZAÏ