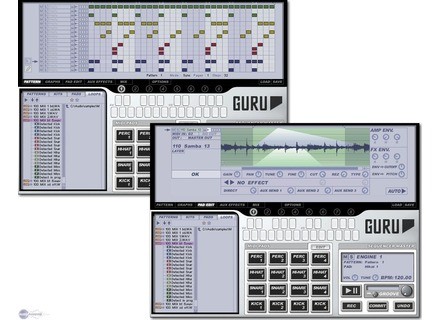 Product replaced by the Fxpansion Geist 2.

Fxpansion GURU
4
FXPansion Guru has been replaced by Geist years ago but if you can still get your hands on it I recommend getting it right away. Guru has some really good features and is packed with beat boxes and loop machines/samples that you can tweak very easily right in your DAW. If you choose you can use it as a stand alone unit, but in Cubase it worked perfectly and never crashed or slowed down my system at all. Even though it is discontinued I still have it installed on my laptop and use it frequently.

There are some high quality built in effects that I really did enjoy working with like the delays and bit crusher effects and resonant filters. There is just about any type of effect you could ever need right in this VST. Guru was very easy to install only taking a few moments and it is very CPU friendly as well as user friendly. The interface was not confusing and it was simple to understand. There is also a manual that came with it that thoroughly explains everything or can be used as a reference manual.

The sounds are all high quality, but I like to experiment with Guru and run different drums through different filters to create some cool stuff. I even run some of the patches/drums through external filters in my FX rack to see what kind of new sound that I can get. Guru has been a joy to work with but since it has been replaced you will not be able to find much support or tutorials for it online anymore. Geist is also very good and it is worth the purchase if you don’t want to get Guru and just get the upgrade.
FXPansion’s Guru is worth the money spent because of the features and capabilities that it has. I recommend installing it on a Windows system because it has been known to have some issues with OS X systems.

Virtual Decadence's review (This content has been automatically translated from French)

Fxpansion GURU
5
No problem to install on my Mac Powerbook G4 Mac OS X Panther.
I first tried the demo and watched the video tutorials on the site. I have read the manual for additional parts.
The printed manual is very well done but in English. There is a PDF in French on the site.

So Mac G4 1.5 GHz (1 GB RAM, external FW HD 7200 rev / min) with Mac OS X Panther.
Sequencers used: Logic Pro 6 for now. I have not tried it with Live 5 (which is often a problem with external plugins).
Some presets are greedy but that&#39;s normal. My config is far from being a monster up-to-date and change the sounds in real time often blow up the CPU gauge, especially in a song or I have 15 tracks (freezées). So nothing unusual.

Version Audio Unit and Standalone version are the two that I use in fact.

Excluding the withthe We spent playing a demo, it has been three days that I use. And when I say three days, it&#39;s almost 3 X 24 hours

What I like most:
- Slicing the Smart.
I Recycle long time. I also used a lot PhatMatik (free version). Not to mention the Warp Live. The slicing here is by far what I have seen more practical. Due to the integrated pattern sequencer, you can see directly the South (so you can quickly change it) and the pads are automatically assigned to the sound. You win a lot of time. The fact that one can choose either the audio récupéer or the "score" (noon), or both loops is that any a priori a power kit or it becomes a bank pattern noon (or both). And then it becomes exhilarating. all users do this slicing technique: we charge a loop from which we extract the MIDI file .. then it is played using the sounds of another loop. It gives amazing results and sometimes brilliant. And there, everything was done to do this naturally and quickly.
- The drag&#39;n&#39;drop sounds on the pads the choice of sounds (or a loop automatically slice, hit either independently or in kits complete) since the browser is great. It allows the preview before validation of the final choice. This allows a pattern of turning to change any of the sounds and try them all before choosing one that remains. Awesome!

- It has everything that makes a good plugin "drum machine" management layers / velocity of the samples, independent filters for each sample, automation (level, pan, pitch, filter ...), management models grooves (with the possibility of creating its own) ... In short I know that Battery is the standard computer music but here I can not see what he could bring me more.

- Ability to change on each hit of each sample parameters such as the playback position of the sample, the time lag compared to a strict quantization (thus to humanize a groove) and the repetition of his ... for apeptes of breakbeats, glitch and other electronica, it has rarely been faster to get something crazy.

- Everything is controllable by MIDI note: choice of pattern, choice of a scene (set of patterns on 8 audio engine), programming beats using the pads.

- The 8 audio engine, the ability to get out the types of instruments on separate tracks, the integrated effects (either to / send to the pads or the general level of each audio engine or on the master): various compressors (with value of attack / release set for each), filters, saturation, bitcrushing, flanger / phaser ... not to mention a super efficient and Trancegate a "freezer" I can not too much to control the effects but I really enjoy (I have yet to understand what it does but at first glance it looks like something in the manages Beat Repeat Live on .. to be confirmed).

- The library of his .. and provided really good fucking. Even if the real trip is to reuse its anciennens sampled loops through the Smart kit as slicing (not to mention the possibility of using his own one shot to get a kit just by dra&#39;n&#39;drop Surles of sample pads) I think I&#39;ll still use a lot sounds provided.

What I like least:
- Nothing. Except that if it had a sequencer song in standalone mode, one might say "but he remains the MPC out of the hardware interface?". At the same time, since I use it in Logic, I have the most séquenceur.En scene management (which may resemble that of Live 8-track) can play a live structure.

- Ah .. if this software is a hard drug to all fans of rhythmic manipulation of samples. In addition, you can also put melodic loops (or make a loop with rhythmic loops melodic pitch as easy to use in Fruity Loops). Clearly, we tend to do a real piece in the entire software in standalone (well if you have already recorded the audio).

Honestly, with a MIDI controller to Pad (like Trigger Finger or Korg padControl) + a basic sequencer (which would only trigger patterns or scenes) ... with Guru was really a power of 10 MPC.

I have tried many plugins rhythm: Battery 2, of course, but it remains in the drum machine standard. I wanted at all costs using a slicing tool. I know the couple and PhatMatik Recycle / Dr.rex but the editing capabilities of each slice are limited (especially in Dr.Rex).
I tried Stylus RMX is top but is especially true for his big sound banks. The functions "Chaos" to a proper rave but I&#39;d rather do it myself the delusion that leave them at a random generator.
In the end I preferred him to his Guru and ergonomics in mind generally more focused on the use of its Propes sounds.
Did you find this review helpful?yesno
»

dcibel's review (This content has been automatically translated from French)

Fxpansion GURU
5
Instal nikel
as said before mandatory asio!
Guru wants very greedy in CPU especially when you are greedy enough of him and that we exceeded the three engine!
because of him and his efficassit j have invested in the dual core has no worries about ableton
The manual is especially nice for the super hidden function such assignment controller

it is the hair it feels great with all this!
I'm going up to 8 audio tracks and 5 tracks on MIDI and I record another audio track
during the live, then the cpu is 43% and it does not crack!
I takes only 8 because he eats even when the machine, but I think it's the price of a perf

It's been a year since I was 8 months and now it turns on the new pc,
It is expensive, trs expensive even but I do not regret my purchase,
I just try to live impulse, but the possibilities with respect to a korg in hardware incredible!
I love playing live, the number of pattern sellectionnable instantly, I use it with a trigger finger, and c is perfect!
I am new to the virtual rytmic dommaine modules but I do not change,
I wait a guru with 2 function that I lack, such as possibillit to transfer control in each pad indepandament change ... GURU II back!
Did you find this review helpful?yesno
»

Lsan's review (This content has been automatically translated from French)

Fxpansion GURU
4
Install without any problems, if only to have XP or 2000 (I'm a PC, with 98 it does not ...), and a DVD player (I do not resort to my music, I had pass network with a laptop and no problems).
Simple registration process (code) and unconstrained (no need for a dongle or other key).
Manuel very clear limits so little use the app is organized as expected.

So P4 2.4Ghz with 512MB RAM, stand alone or in Logic 5, no problem (note that I always had a version of Logic 4.8 installed, then it does not pass, soft forces designed for Win 98) ... I also opened seamlessly with Fruity Loops, but ...
I just have it so I have not yet grown up to something muscular level VSTI arrangements. But I am confident I have the DR008 from the same brand, very light. And the little that I see is stable.

Therefore used for a week, after testing the demo I went to buy it in stride, almost running ...
I'll let you see the AF test for details and options. Ls This is also the fault to test if I took it, well, thank you AF for my wallet: o)

For my part I find it incredible flexibility, excellent: he feeds his samples, they are editing in live, are programmed patterns, they sequence with the sequencer ... and all this while the song turns .. . hell it's simple! Finally an app with which I am not stuck on the prog, it's really intuitive, fast and well done for. I tested all kinds of config, drum hardware (tr707, roland r8, Machinedrum) to soft (dr008 + pianoroll, fruity loops) through I play the keyboard or pad to requantiser ... Here I am really comfortable, to concentrate on creating music and unbridled.

Finally a small note: the app is young, he has, it seems, some bugs of youth, that we discover by browsing the forum active and reactive FXpansion. Which suggests a good evolution of this soft, with an active community already heard by the developers ... (have a history of updates).

[edit 20 april 2007]
I drop a point, I find it lacks one feature: a song in fruity loops mode, it breaks up having enchainer pianoroll patterns via the sequencer, not as flexible ... strongly Version Next ...
[/ end edit]
Did you find this review helpful?yesno
»
Read the 6 user reviews on the Fxpansion GURU »

See all 14 photos of Fxpansion GURU »

View all 3 videos of Fxpansion GURU »

Listen to the 5 audio files about Fxpansion GURU »