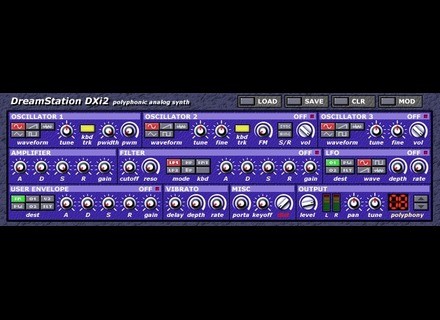 Audio Simulation DreamStation DXi2
4
The Audio Simulation DreamStation DXi2 is a software synthesizer, modeling it’s sounds after traditional analog synthesizers. I haven’t used this plug-in in a few years since I was in school and working with building sounds. I don’t own it and I’m pretty sure that it’s only available for PC systems so I wouldn’t be able to run it even if I had it and wanted to. The configuration of the Audio Simulation DreamStation DXi2 consists of all the working parts of an in depth synthesizer. It’s the perfect way to learn all of the components that make up a synthesizer, which is one of the reasons we used it a lot in the music technology classes I took in college. The DreamStation DXi2 has three oscillators, each with a slightly different make up of parameters to work with. There is then an amplifier which gives you control over the life cycle of the sound – attack, decay, sustain, and release. The amplifier is followed by a filter, an LFO, a envelope, a vibrato effect, and an overall output section. If you understand the basic parts of a synthesizer, this will be pretty easy. If not, this is a great place for you to start.

I don’t remember much about the systems we ran this software on at my school, but they were all PC computers. We used the synth mostly in Cakewalk Sonar software, which was able to run it smoothly for the most part. It’s been a little while since I used it, but I don’t remember having any problems running it within the PC systems we were using it on.

While the sounds heard from the Audio Simulation DreamStation DXi2 may not necessarily be the most authentic ‘analog’ synth sounds you’ll ever hear, but they certainly sound pretty good and are more than adequate in most situations. I seem to remember that there were a good amount of presets to use as starting points, but it’s definitely fun to work from scratch and make your own sounds. I don’t know too much background information on DreamStation of the DXi2, but it’s cheap and is a great way to start getting into the worth of synthesizers.
Did you find this review helpful?yesno
»