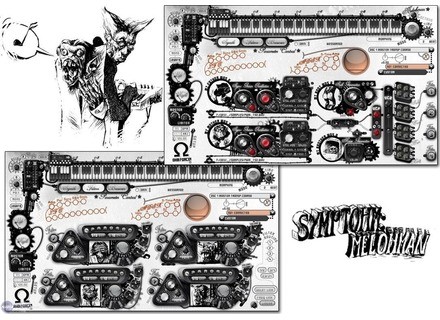 alainattar's review (This content has been automatically translated from French)

A config with an Athlon XP 2800 and another with an Intel P550 3.4 Gh. The software runs without problem on both PCs. Symptohm Melohman is a software VST2 obviously mature, reliable and well-Designed. The proof is that it is enough to try to make sure no dlier scholarship, which is a guarantee of srieux and confidence in this talented team of developers franais.

I use it for a few days. I am interested by the possibility trs to adopt a skin "Classic" that will reassure some and a skin "Funky" worth the dtour. Add this to everyone, an amateur version and a Pro version, so you have the choice of the look and the price you can dbourser. Bravo! This software MRIT that one stops there because it provides sound bases trs good quality, combines feature automates refining, not to mention the possibility of CRER its own sounds and to rcuprer site online. The only limit is your desire or your imagination! Try it, you will pass, believe me. I say this all the more slowly it will bring me nothing.

Virtual Decadence's review (This content has been automatically translated from French)

The PDF manual in English is clear enough. Expected manuals Frans (edit: ay is they are l.
Reading the manual is not to pass indipensable ct one of the infinite possibilities of the bb.

No problem of stability. Now with some preset (and some sound of my composition), the station CPU .. especially when you are like me crazy synth and cde that we tend to put several in one song.

I use it only for a week but the bottom.

Its architecture is terrible.
Ct synthse Engine: Two analog oscillator shuffled hybrid "hard sync" and synthse granular (in fact I was looking for a plugin which would incorporate the principle of Reason but Malmstrom in AU / VST and c is the same thing only better and with the possibility to put his own samples and synchronize all over the place) + 1 + 1 sub-oscillator noise generator + ring modulator.

Ct effects: neither more nor less than four times the ultimate filter that made the reputable brand: Quad Frohmage.

Routing possibilities are exhilarating either the indoor or synthse engine to route the diffrent DIFFERENT oscillators filter bands, see the same filters in them (more SERIES combinations into which a bet or not parallle SERIES 4 of giving, if we set each filter 36 db / octave filter with a slope of 144 db / otacve ... I leave you think the trick).

The presets provide a good picture of the possibilities of the monster. But we are trying to CRER ds is the same patch with a sample of his own, has quickly become the hyper space. In addition the sound is standard.

To speak of the modulation, it is nirvana: I have yet to find a parameter that is not modulated by its own LFO, gnrateur its own ADSR envelope or its own ractions MIDI commands. So a modulation matrix almost complete. Unheard of for me (except BMD Minimonsta I think).

Not to mention the Melohman Systm (Submitted on Minimonsta also) which allows an octave keyboard ddier 12 sub-patch (they call a preset) from a meta-patch ... and so thanks to this one octave preset morphing (too bad it lacks a morphing sample but hey ...).
Edit: I use a guitar with a MIDI converter. I paramtre pdalier my Behringer MIDI notes on Melohman (excluding tessituras guitar, of course) .. a killing in play live.

My synths are those of prfrs Logic (especially ES2) + the Malmstrom Reason (and the little I have tested the operator of Live is also the fact).
In gnral I just find plutt vintage sounds with a (good start though I know the ES2 and out of the box a bit).
Symptohm with, I quickly found sounds more original and boosts crativit (I did that for a week and I finalized an arrangement or it is my main keyboard).
Everything is surenchre this synth and I think it takes months and months to go around.

This stuff is really as crazy as the leaves look and feel prsager his version "Funky Skin". I recommend it mainly for thinking outside the box of synthse ... DEFINITIONS .. and without losing the big sound.

Go let's say that I regret a standalone for live performances. But it's really to quibble.

EDIT: I also dsormais Ohmforce the full effects and I have to say one thing: these people are seriously ill. I guess you had to say was one of Robert Moog's era.