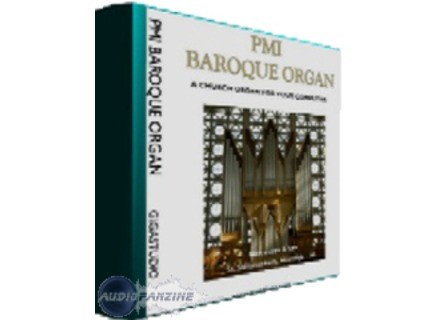 Burnie's review (This content has been automatically translated from French)

Post Musical Instruments Baroque Organ
5
Installation: it is a bank of samples that can be purchased online or on DVD by mail ($ 20 extra, 10 for the cake, and 10 port), the two formats Gigasampler, Kontakt, Halion or EXS24. Attention must choose the format with the order, because 4 is not provided. So in terms of the installation is like any big bank (it is between 1.5 and 1.7 GB, depending on the format). Note that I had problems to open the format Gigasampler in kontakt 2, but it can come from a bad download (I bought this online banking, and I chose this format for compatibility with many samplers). I asked by mail if I could download the Kontakt, and I immediately received a link to download the format, which is really correct. And there, it works flawlessly, because I use Kontakt 2.

Of course, as a large bank of samples, you need a fairly powerful PC with 2 GB of RAM. In Kontakt 2 standalone, with all games based, it is over 60% of memory. on the other hand, as there are 28 games, if you add a reverb, the polyphony of kontakt is quickly outdated and must change the settings, to well over the 500 votes! But that&#39;s the lot of all the organs somewhat consistent ... And it is not conventional to use all the games, because it is absurd organistic ...
In terms of stability, it depends on your sampler kontakt or not the bank ...

I have this bank for some months, and I&#39;m delighted. Let&#39;s specifications: it is a modern organ from 1965 to three manuals and 28 games, baroque, manufactured by the factor Marcussen, at St. Stephen of Moerdijk, Northern Brabant (Netherlands ). It was sampled note by note, 55 samples for each of the 28 games. It comes with ready-made combinations (to save resources), but I personally prefer to do it myself.

His samples are recorded with very little reverb, and the instrument is quite dull, which allows to use it as you want in a sequencer, and add effects as desired, without being embarrassed by the acoustics of the place of origin. Personally, I just play it either as is, because it sounds great, I will be adding a little reverb kontakt.

Now let&#39;s get to the point: while standing, it is simply the only good ORGAN BANK general, that is to say, available for most popular samplers! It sounds great, the instrument has beautiful colors, and it was with all the possibilities of an organ, while all the competition is poor: The famous organ in Budapest is a stew of Gigastudio infamous and expensive, which can please only people who have never approached a real organ, and that sounds terribly artificial. The "Peter Ewers: Symphonic Organ Samples" has only a few combinations and is registered with a reverb unbearable, and I can find fault with the few other similar competing products. Nothing to do with the PMI Baroque Organ, that sounds natural and can play a really nice church organ at home.

on the other hand, there are now organ banks recorded better (some are extraordinary), from the finest instruments, produced for the Hauptwerk software especially dedicated to the organ. But it is a fully locked format that can be played with the Hauptwerk software, which costs a fortune. The banks in question are also cost a fortune (several hundred euros to 700 euros!), And you can not play them in a sampler, let alone bring them into a sequencer ... It is therefore not better than the PMI Baroque Organ in one niche, reserved for the wealthy organists ...

Therefore, when you will know that this bank can be bought now for $ 50 on the site Sampletekk (since the merger between the two boxes), which amounts to less than 40 euros, you understand that the price / quality ratio is excellent! Moreover, note that there is a version for Hauptwerk PMI Baroque Organ, and it still costs 120 euros! (Look for the error, as this is exactly the same bank, but not in the same format)

Of course, very few people played the organ, let alone the virtual organ (the virtual absence of reference to this instrument speaks of AF ...), but if you want to discover this beautiful instrument, or if you&#39;re wondering how to put the organ to an original arrangement in your songs, or imitated in King Crimson "The Court of the Crimson King", and Yes in "Parallels" or "Awaken" (album "Going for the one "), then do not miss ...

Oh yes, I forgot, for those who still appeared that the organ is the big thing that used to accompany the words stupid priests, in short, those who inspire it necessarily mass, you should realize that is the ancestor of the synthesizer, as it allows to stack sounds and combine them with lots of variety and finesse, and an infinity of non-religious works was composed for this instrument sumptuous ...