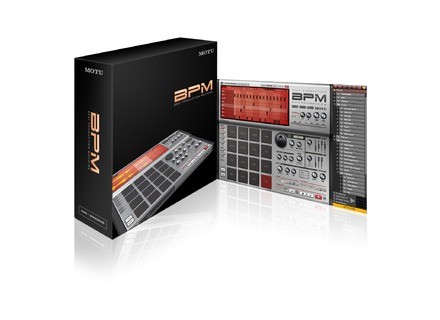 View all offers for MOTU BPM »

MOTU BPM
5
BPM (Beat Production Machine) is compatible with Windows Xp ,Vista , 7 and Mac OSX.
I haven't encountered any problems regarding the help manual, everything is pretty well explained and the functions are easily accessible.
The general configuration is great,everything works fast and the interface easy to follow and use.

The software performs well without using a lot of cpu resources and it provides some great balance between the human touch and the pc programming of the drums.

The gear is very stable, I hadn't had any errors working with it.
I've been using for about 1 month, and I gotta admit it works very well , I've used this machine more in my pop , rock composition.

What I like most about it is the feel that this drum induce which are some classic drum machines of the 80's and 90's.

I like a lot the library provided with it, which consists on 15 gb of pure drums , it has a drum machine-style operation with advanced virtual instrument that allows your creativity to reach a higher level.

Another great aspect of this product is that is has 64 pads per scene , great controls to mute , solo , change velocity , etc .

My opinion about the value of price is very good , this product comes with a vast library that allows to make something unique and it costs only 300 $.

Knowing what I know, I would buy this product because it's one of the best drum sequencing I have ever tried.
Did you find this review helpful?yesno
»

MOTU BPM
4
The MOTU BPM is a production software that comes loaded with 19GB of sounds, a whole bunch of effects and you can sample right in the software. You can run it on your PC or your Mac, if you are using it on a PC you need to have XP, Vista, or Windows 7 either 32 or 64 bit. If you are on a Mac you need to have OSX 10.4.11 or higher and a G4 or better with 1GB of RAM.

If you use MOTU BPM with ASIO drivers you will have very good playback and glitch free low latency usage. But without ASIO drivers depending on what you system specs are you could experience some issues with latency and glitch like behavior during playback. Though it is very easy to install, the program is much bigger than expected and it can eat up your CPU quickly. Especially when you get into processing all of the effects, you will almost have to be using an ASIO driver in order for it to play smoothly.

One of the worth the money features , are that you have an unlimited FX slots per rack, so you can just start stacking those effects up on top of each other and get some really cool sounds, but like I said if your drivers are not under control you will not be stacking too many effects together before you start to experience choppy playback.

This software is good, and it comes at a decent price. I just did not have a need for it so I never used it after the first few initial times. It does come loaded with a lot of synth, bass, and drum sounds. It is also ready to go right out of the box. No hard set ups or anything like that, the manual that comes with it is pretty thin, but it helps you a lot if you need it.

roukado's review (This content has been automatically translated from French)

I use it on mac via logic pro but it is possible to use "alone" I heard it is more stable on Mac and PC
some bugs for premires version, but rsolus

269th for ca mpc will !!
Did you find this review helpful?yesno
»

Djeep Manov''s review (This content has been automatically translated from French)" Yes ... but apparently NOT! A beta version sold as an app!!"

MOTU BPM
1
The installation is done it without problems?

I do not know about mac being under windows. I installed windows xp and under seven. Some constraints forcing them to copy shortcuts bank's 17 gigabytes in the same folder as the dll ... anyway! It could have been easier but it is not dead!

Former user mpc, configuration seems familière.on sees when entering the details that is far from the last mpc.Il flexibility is very simple to create a pattern with excellent sound bank available to the app that in fact also one of its main interests.
MPc early on, we were limited in the visual editing pattern and song because the screen is permitted pas.15 years after the UVI developers have seen fit to keep the same visual impairment probably to keep in mind!

More use standalone is very limited and does not allow to use other vst internally. Example to put a UAD compressor on an internal bus you need to open bpm bpm vst in your DAW!

A mess on PC! Again I do not speak for mac that I used pas.Des bugs in series. The undo is very random, it is better not to make mistakes or deleted by mistake. The (very practical in appearance) editing functions are not reliable and notes shift them even as sseions becomes "loaded" (about 7-8 patterns). Basically you play a groove and elements of tempo hero finds no apparent reason at the next login! The "loop" function to carefully cut the samples can only be used with the mouse scroll. Jai .. mouse logitech marble mouse is not recognized and I have to change my mouse if I want to use the magnifying glass!
Adding layer to the stacker is more hazardous sound and you will often uncheck the "edit all layers" option which joins the same treatment to all samples and that "Récoché" reasons alone without doing so you lose the affected settings chacque has added to its layer! All this causing great loss of time, to repeat what has already been done and loss of spontaneity! I pass and best.

The manual is clear and sufficient? ...

The manual is more than necessary for the installation, for the rest we do not learn much! .. We know that a filter is used to filter, that eq equalize etc. ..


BPM is somewhat greedy May it is understandable given the number calculations to manage.

The idea of ​​this software is very good on paper and I've been able to do with many projects (not without difficulty) with BPM.
However developers have literally abandoned users with their app that seems to me to be a beta version, a demo they sell and continue to sell (very expensive in terms of innovation competition, Maschine, Fl Studio!) With too many bugs! An update is required CONCRETE with optimization in publishing as I said the app could be very well without all these defects causing loss of time so it is better to actually lose in the long learning another "step by step".
In anticipation of a serious update, If you are looking for something simple and intuitive works on, go your way!

Did you find this review helpful?yesno
»
Read the 17 user reviews on the MOTU BPM »

Published on 08/03/10
BPM 1.5 adds many new features, plus 4 GB of additional sounds for over 19 GB of included kits, patterns, loops, and samples, according to MOTU.

View all 9 videos of MOTU BPM »