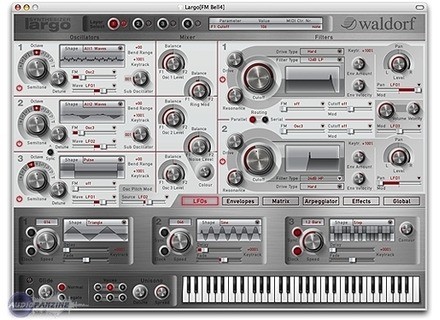 View all offers for Waldorf Largo »

As previously stated, no problems or crashes freeze, it runs itself. At the same time it does not seem vsti weigh very heavy ...

... I said: no problem at various controls of the beast, there has what it takes to cut the sound you want, BUT, whatever you do, it will always sound like Warldorf .. . cold, clinical, aggressive ... ok, this is useful for some compounds but the sound is so typical that it is difficult to use in anything other than trance and consors ...

So if you only evolve in this musical style and are an absolute fan of this brand, go ahead with your eyes closed, vsti is for you!

Anyway I put 8 because the controls are numerous and quite nice interface. My opinion on the audio is only a matter of taste. Objectively, this vsti runs very well, stable and everything else

ysf78's review (This content has been automatically translated from French)

Waldorf Largo
yes no problem for installation.
for configuration is very fast there's a preset init to reset the synth.
no incompatibility problems.
I have not used the manual.

I own an iMac 21 inch 2011 under mountain lion
the synth works perfectly in logic and very stable!

since September.
j'aime bcp sound is very flashy and pure and clear interface.
I use bcp to my prods.
I would do this choice of course!

Waldorf Largo
3
The installation is done it without problems? yes The general configuration is easy? yes Have you experienced any incompatibilities? non

What is the configuration of your computer? I7 2600k 16g ableton, maschine, the rhizome software he correctly on this configuration? yes
This software + hardware is stable? Yes just lil bug on the rhizome but nothing too embarrassing

How long have you use it? 1 year
What is the particular feature you like best and least? most: I like the interface and the filters ....... Witness: sounds a little too trance / dance for my taste

paradies's review (This content has been automatically translated from French)

Waldorf Largo
4
No worries installation, the license is managed by syncrosoft that users of Cubase know. My version is limited to 30 days, after which al I will decide for or against this vsti (Note that I am not a fan of virtual instruments for live among others), although I found their usefulness for the live in terms of compactness) It s not act (too) to compare hardware and software. No I do not really like the drop down menu that lets you choose the sounds. Perhaps this is secondary to some who can drive change through sound controller, but in the context of a config travel readability is a bit lightship. Ajoutdu 29/12: New version: "The browser has also recently been improved, with access from the same window to banks arranged left and right banks charge."

Thank you, Mr. Waldorf! Not had to read the manual yet. We are December 2, RDV in 30 days for more comments and maybe a turnaround ... We are December 29 (Merry Christmas): I readjust a little notice notement thanks to some of you ... I don not buy it because it largo sufficiently given my desire to add some money to buy get a blofeld ...

I did test the vsti on a dedicated PC (intel core duo 3ghz, 1GB ram) The sound card is a Roland SP 606 sampler connected to midi mac has a system based on pro tools. So the PC only serves to rotate the plug ins in cubase or 4the samplitude 10. The software works but I just do not speak here of CPU resources, because I don not use vst fx and does not read any media audio video (since it is on the mac) Performance is good for portable troubleshooting for the composition, maybe for some live electronica, but even for a vsti, the sound is not very wide, narrower than a discovery (which includes among other Nordlead analog modeling, and for a vsti is particularly hot! ) However, it is more crystalline in my opinion, sweeter. I specify that these two have no vsti not necessarily the same vocation and that I do here that compares the sensation of thick sound output. And n in deference to fans of Largo (I'm still for some of its aspects), it is more metal than discovery.ca is not necessarily a defect; A user talented and good at synthesis will recess around this aspect but it seems necessary to point out or at least bring this experience to your own sagacity. https://www.discodsp.com/discoverypro/ for a demo (we can safeguard his personal sound but everything else is ...) A +: many sounds

I used the last few days and currently only in test sounds of factories. I do not think use the possibilities of sound creation for I use it for that the Blofeld. I tried at the same time the proteus vx, korg legacy, the discovery, the Access Virus. I will say that Waldorf is one whose sounds seem closer (print mp3 if you want ...) No comparison with analogue synths, in terms of thickness. I urge followers of the discovery vsti testing, and go ahead and for a few dollars more to try blofeld!. If the imperative of compactness is not a problem, a micro q-hand seems a better way to have sound waldorf. The value depends on what is expected ... for a studio integrated whole, it was the waldorf bcp presets, editing capabilities, for fans of hardware, it is less good, not particularly expensive either but, rather, becaufe the blofeld is particularly cheap! Make your opinion by testing the plug ins in 30-day demo version downloadable on the site waldorf: http://www.waldorfmusic.de/en/products/largo and also https://www.discodsp.com/discoverypro/ to compare it still the best ... For novices to the mark, it gives a good idea of ​​what could be its waldorf with a real synth! when I turn 8 for the same good idea to let test the product before offering a real demo! and because the heat of his works that are featured in its chain and the audio plug and it's also a history of gout.

Added February 2010: after having listened to the Spectrasonics Atmosphere, the rgcaudio z3 and still others, it remains the largo vsti I prefer to ...

Published on 04/21/16
Native Instruments have partnered with Softube, Waldorf, Sugar Bytes, Sonic Faction and XILS-lab for a limited-time offer.

-30% off all Waldorf software synths

View all 2 videos of Waldorf Largo »