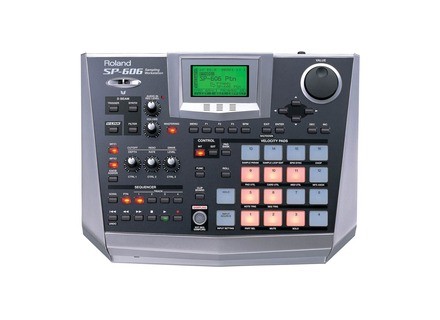 SP-606, Sampler from Roland in the SP series.

Roland SP-606
4
Well I will not repeat the trick, everything has already been said does a technical point of view ... except maybe that the effect section is a bit brutal and coarse but allows nanmoin to do a lot of thing (especially with battery kit), bpm sync / time stretch is not very clean and alters the sound of considrable way but good with a good external squenceur the problem does not arise.

Operation is very simple in very short time you can create a sound with one or two samples and more running, the machine is very intuitive, I regret (but I believe) the fact not being able to name the bank individuelement pads.

I t surprised I was expecting something flat and bland but I create a few pieces prmasteris limit is correct quality is not bad at all for a small machine The mastering key to inflate a little sound and sunrise, but hey it's better to have some external effects rack.

Unit more than adequate for the price with 256 mb card already has enough to do a verse or a mpc mc 909, a bass gnrateur, a rack of effects, a master keyboard and s sequencer like cubase sx pro or acid can be obtained good results ,.
Did you find this review helpful?yesno
»

xavier 57's review (This content has been automatically translated from French)

Roland SP-606
1
I improviser saxophiste soprano I'm raliser an album and I need to drum n bass jungle groove essentially this machine can help me I have to build my rytmes she has programms battery kits and grooves dj programs or must do everything I'm sorry I'm new, I want to focus on loops built by me and that I could turn fre willingness and need raliser serve my album thank you for the advice I look mc rs 909 700 and this machine seems appropriate because next evolutionary thank you for your answers

Cscs
Did you find this review helpful?yesno
»

a.k.a's review (This content has been automatically translated from French)" A good sampler!"

Polyphony: 4 stereo or 8 mono score.
EFFECTS: 24 in total (not sure) with conventional filters, distortion, flanger, phaser, EQ, compressor, limiter, ring mod, delay, reverb, echo, etc.. We can use both simultaneously and control their settings through three knobs and activate an additional "mastering" button to sculpt the sound output (filter, compressor).
CONNECTIONS: jack 6.35 (I / O stereo), S / PDIF, MIDI I / O, USB, Foot switch, headphone jack and lock.
No idea about the converters.
The standard MEMORY is a few minutes (or 128 samples) that can extend to several tens of minutes (almost two hours, I think, be 384 samples).
The SEQUENCER has 4 tracks and you can program up to 18,000 notes.
There is software, P606, with which you can edit and prepare samples sequences but I've never used. It can be downloaded, as well as various drivers and manuals at: https://www.rolandus.com/products/details/573/downloads/

The operation of the beast is clear and intuitive: it has 32 banks, each comprising up to 16 samples (giving surprise, up to 512 samples). Each sample is assigned to a pad and we can start playback in three ways: by keeping the pad support (playback stops when the pressure is released), pressing the pad once (Playback stops at the end of the sample) or loop.
PADS are great, although reagents and velocity-sensitive I have used for years to play rhythms on the fly. Do not expect much for the possibility of round robin.
The sampling itself is very simple: it is clear in the section on active input on which is connected to the source sampler, a bank, a pad and starts playing the sample from the source is selected.

If you do not fully understand something, the manual is very clear and answer all your questions.

For editing sounds, it is possible to zoom in on the audio forms and do basic editing operations (cut, crop, delete, and even burst the various elements of a beat on each pad) but I preferred do it on computer to be more precise and have more advanced editing. As for the effects, it is very easy to use (they are activated with a button) and change the settings as desired.

Nothing particular to say, this is a sampler that makes what we feed him. There is no particular "grain." I think the sampling frequency can be mounted at 48 KHz but otherwise it is 16 bit 44.1 kHz.

I love the effects always have parameters cool hacking. I am regularly served at a time to deal with instrumental sounds live and I particularly liked the feel of the knobs and the sound made.

I am separated in early 2013 after having second-hand in 2007. It is a robust and reliable machine that has never failed me. It was my first sampler and I learned a lot by using it. The features that I like the most is the feel of the controls, which I use franc and the sound effects.
Those that I like the least, the limits of polyphony and only 4-track sequencer. I also liked the medium four leading banks contain factory sounds (of drum machine, funky loops and synth) which we can not get rid of and thus clog the machine irrevocably.

paradies's review (This content has been automatically translated from French)" clamped by the holder stoskage ..."

Roland SP-606
4
The SP 606 has 16 pads, part 4 sequencer tracks (step or real time) a sampler "on the fly" at noon,
usb to become a sound card for pc and mac
dual multi effect
The output (mono) R
a headphone output jack (6.35)
Input jack 6.35 L / R
Input SPDIF digital output on RCA
a compact flash card reader (this is the main flaw of the machine, see below)
16 mb internal memory, expandable compact flash card of 512 MB MAX
P606 PC software only supports
A laser sensor "DBEAM" that can be assigned to the filter effect eg

The box is a lot ... too ... The sequencer does not boil TR that may disturb ... The sampler does not import banks AKAI / EMU so farewell unlimited expander side of S5000
The manual can meet courentes questions.

We can do a lot of things since abestiole without resorting to any editor, and indeed it is faster to record its samples as the simporter in usb (owner format)

Sampler can be mono or stereo, which allows a large range on a 512 MB card

Some have managed to configure the controller as noon ago

It is 16 bit 44.1khz: adpanne but not transcendent in his home studio map is far from RME, but to supply a sound system with a computer and synths, it works, we then profiteras the effects section will be assigned to the pads, to the Input or USB stream ... (making a sound card with a super dj controller Vestax VCI 100)

The sounds are that we will place. Personally I use it as follows:
Internal-Bank TR = samples, kits batteries old synths etc.
Compact Card = loops, sequences, playbacks shows or performers

The effects are not all the maize ...

I have for quite some time, but I have never really been able to use as I wanted ... I thought so to part many times, but never my address because my sp saved shots many times also, by diverting its initial use.

Finally I used mainly for the sp

- Bands sounds of shows (instead of having it on CD or minidisc) because there is a function to launch pad by pressing it, and it continued until the end and stops himself.

- Sound card mixer for mac: the sp to the front, internal card mac for headphones, no latency, and the ability to use a pad bank with percs and sound effects during the mix, several laser sle for the filter, visually it works every time!

Today I used the box a little pace, but there is no output "trigger" to send a bike analog

I'm sure we can still do stuff with, including a sampler is Rhodes to be everywhere BUT with enmener

The big downside is the use of the support COMPACT FLASH. In fact we do not find more for a long time that meets roland, that does not exceed 512 mb ... the SP is unable to format the other cards, even ignoring the upper capacity of 512 ...

When I bought this machine I was told that it was the model above the SP404, the latter, it has an SD (easier to find) cards up to 1 GB, I sui sun little angry after Roland on this one, because a few months after I bought it, 689 euros new still in its release, it had already begun to row to get cards ...

This is unfortunate because it means there doing a lot of things with this box.
It is to consider THAT suffisement equipped with CF card ...

TR 808 followers certainly find their happiness in a korg electribe or volcanic.
those seeking a sampler capable of playing many banks prefer a rack.
Finally look for "groovebox" it really depends of what you can put him in the stomach, the advantage being that the sounds remain compact flash memory unlike a type sampler s3000 ...

Did you find this review helpful?yesno
»
Read the 12 user reviews on the Roland SP-606 »

Roland SP-606 manuals and other files