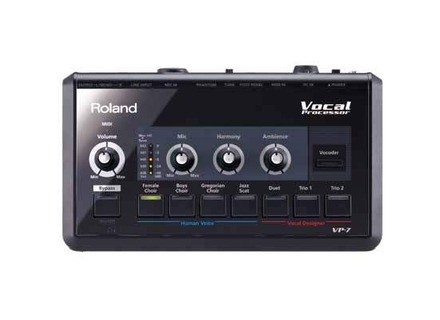 Roland VP-7
3
The VP-7 is a pretty simple unit to operate; it is a vocal module processor that gives you some basic effects but nothing that will make you love it. You can use this to give you background vocals if you are a keyboard player, that is about the best function that it provides. It is very easy to use and set up, it is basically just a “select a sound and use it” type of unit. There are some cool robot style effects that give you an interesting sound but nothing that I would really think would be usable in a live show.

The VP-7 is a smaller unit but it is made good and looks very nice. The knobs are made very well and do not seem like they would ever get loose or break off even if dropped. The quality of this unit is exceptional but the features are nothing to brag about.

The only reason I would purchase this is if you or someone is a keyboardist that plays a lot solo and is looking to get some harmonize to his playing. If so they will love how they can get some decent backing harmonies and add up to 3 voices. You can create this effect without having to sing at all, or have anyone else sing. It does it all on its own and these feature is about the only thing with this unit that makes it worthwhile.

If you are not a keyboardist looking to get some backing harmonies then do not purchase this because that is the only feature that will really get you your money’s worth. This unit cost over 500 dollars which is way too much for something that does not have a lot of features. It is made well but did not provide enough for use to want to keep it.

Elwood groove's review (This content has been automatically translated from French)" simple, efficient, good vocoder including"

), activating a bypass footswitch function in MIDI.
comes with a headset super quality.

onfig ultra simple. a button function. no editing sounds against. this is not the object of the machine. for vocoders, enough presets to find the right sound and you can adjust a reverb / delay effect added, the mix between active voice and voice effect and microphone sensitivity. the same for the harmonizer function.
not needed to open the manual ...

the voice sounds are good (vocals) found eternal "scat" Roland synths, sound that fun 2 minutes but never used lol.
function harmonize effective when embedded in a mix. definition remains somewhat artificial but I knew it complies with videos demos running on the internet.
very good vocoder is basically why I fell for the craft. quality microphone comes with it a lot but the presets are really damn, there is a beautiful definition of formants is what I was missing on one of my Microkog XL or my R3 before (which was better than the MKXL though)

I was looking mainly a complement to live and especially effective vocoder in the audibility of speech. VP-7 responds perfectly. harmonize the function remains artificial in its rendering but provides more available. but not edit presets but enough to find happiness.

otherwise:
1) unlike MKXL and R3, when you do not sing the sound stops even if the note on the keyboard is held; damage function was convenient to make games fun scenes, gender pretend to have the lungs of Celine Dion. with VP7, good, ben must take a breath for a held note lol
2) a button octave + / - would have been nice: harmonizer follows you on the basis of the octave in which you sing and it makes harmonies sometimes too acute or too serious as appropriate. the same for the vocoder, this would allow easy rather than setting the master keyboard settings, especially from vocoder solo on a keyboard also dedicated to other sounds. but we manage to circumvent

Tanddem's review (This content has been automatically translated from French)" VP7 nothing exceptional in the sun ..."

simple and intuitive to use

When I say nothing new under the sun is that the VP7, like its competitors in this range, still have good voice "synthetic", it is usable when it is embedded in a musical, but see only a , supported by the VP7 top ... no.
Another detail a little irritating, I guide the agreements of VP7, through noon, connected to my electric piano, the agreements do not remain stored, ie, as soon as I release the agreement on the keyboard, choirs also stop ...

That said, the VP7 is quick and easy to use, small and light, to support some tunes he will do

6 of 12 people found this review helpful

Published on 05/14/10
The VP-7 Vocal Processor portable vocal processor is designed to set up on top of keyboards and to create ensemble vocal sounds with a variety of PCM-based vocal sounds, or with Roland's Vocal Design…