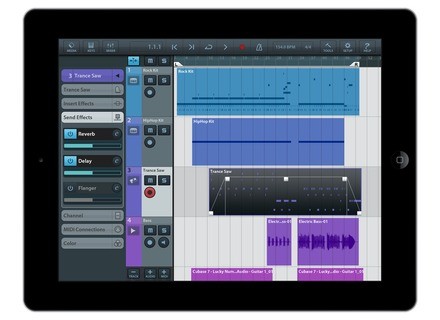 iCubasis Lite Even at its relatively young age, the iPad has already placed itself at the head of an extensive audio software library, running sequencers that are far more than simple toys. The latest arrival in this category, Cubasis from Steinberg, is not without its limitations, but has enough qualities to ensure its rightful place on the podium. See the following detailed review. Read more…

dreumeur31's review (This content has been automatically translated from French)" Very good DAW for iPad!"

Steinberg Cubasis App
After going to Garage Band Music Studio and Meteor, I finally found a reliable sequencer I needed. The price initially made me hesitate but I already knew Cubase having worked there since the Atari, too, when he presented a price drop of over 30%, I did not hesitate a second to turn to the sequencer which I had already informed spooled users.
For now I am very satisfied with the use that I do, my bet is to record an entire album on this sequencer, and it goes very well for now, with the help of some sound modules Additional (the SessionBand, Drum Jam, NanoLog, Alchimy ...) and essential Audiobus! I eagerly awaits mastering with Master Tracks I just bought. I also appreciate that in this price audio plug-ins and various effects are included, which is not the case Auria which is very expensive by adding plug-ins.
Some requirements miss me yet but maybe it will come there in future versions I hope, such as changing tempo in full song, a little more flexible and better management method of selecting all files relating to the project so that everything is centralized in the library of the same project, because at the moment it is a bit of a mess between waves, midi, etc ...
Anyway, I say bravo to this port on the iPad, this sequencer Cubase which was so hard to leave!
Value and reliability exellent!

Bonus: You also have the ability to export your entire project (song), by Zip in Dropbox for example, and you open it on your Cubase Studio on your Mac or PC!

Note: However, remember to firmness unnecessary apps in the background and avoid going beyond 16 bits.

Published on 02/19/15
Steinberg adds to its Cubasis portable DAW on iPad two packs with 6 effects each available via in-app purchase.

Cubasis on iPad now in v1.8

3 Steinberg news for iDevices, including a gift