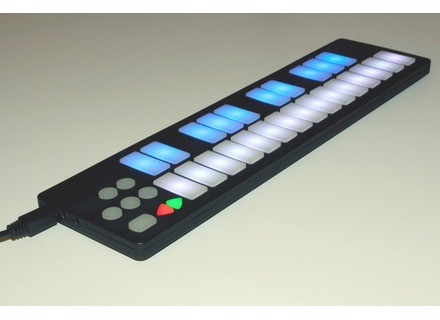 Keith McMillen Instruments QuNexus
3
I was looking for the smallest keyboard to use together with a macbook and be able to record melodies quickly with Reason (as well as some ipad synths). I first bought a Nanokorg (V1), which was inexpensive but terrible regarding the keyboard itself. I already had a Xiosynth, which is very practical, but I wanted something in micro format.

Regarding the most important element, namely, the keyboard itself: Well, it's amazing. Granted, the silicone keys demand some time to get used to them, and you don't play the same way you would on a piano, because they are more like pads. The keyboard is relatively subtle and comfortable, the (adjustable) velocity boasted about on the website is true and allows for enough amplitude when attacking the keys (although real piano players ought to know it's definitely not enough). It has a good finish, the chassis is made of plastic covered with some sort of rubber, but it's not indestructible like they say on the website. It's not like you are going to amuse yourself twisting the keyboard, but you can tell that it bends easily when twisting it with both hands Once in place, it's really stable on its pads and doesn't slip at all.

The pitchbend control responds very poorly and is hard to use correctly, it would've been better to integrate a slider like on the QuNeo for this function.

Once connected, the QuNexus is immediately recognized by Reason on my Macbook (same with a PC), as well as by all the synths I use on my ipad: Moog - Sunrise - Thor - Korg MS20 etc. There's no need to install any drivers, besides the editor, of course, which is much appreciated.

The editor is rather comprehensive, easy to use and it perfectly meets my (modest) needs under Reason. You can use the various templates included of the most common DAWs, but you can also configure the entire keyboard manually, key by key, and it works really well on the vertical axis, too (as a sort of slider, for instance). The "sliding" keys require some dexterity, but they can come in handy. Do note that it's a limited product in this regard and cannot be intended to replace a master keyboard with X controls. The main reason to buy such a product is its extreme compactness, since you can carry it around anywhere with you. It doesn't do many things, but it does them well. I'll nevertheless keep the Xiosynth, which is more practical to play at home. You can also control analog devices via CV, but I haven't tested this feature yet.

The QuNexus is, to me, a very handy tool that fulfills perfectly two goals: It's tiny but the keyboard remains usable and better than most mini-keyboards you can find out there for about $80/$120. I haven't tried them all, obviously, but they are rather spongy with a travel that isn't really useful in terms of velocity. In this regard, the QuNexus' different approach is very welcome. To warp it up, this product promises a lot and I will follow V2 carefully. The price ($150) is too high, though. A new light version just came out, you might want to consider it, depending on your needs.
Did you find this review helpful?yesno
»

Published on 04/30/14
Keith McMillen celebrates the first anniversary of its QuNexus controller and wants to offer you some gifts for this special occasion.