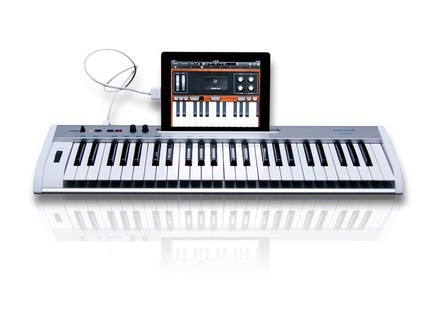 universal dock for every mobile smartphone, iPad or Tablet

powered via USB or external DC power supply with

I was not looking for any particular function, but the quality of the keys.

I've had two E-MU X-boards, on which I liked the quality of the keys, which is fast and quiet. &nbsp;
However, reliability was not its strong point, and both let me down and I swore I would never go there again.&nbsp;&nbsp;I played with a sort of Bontempi organ&nbsp;with MIDI for six months – until the release of this little gem.&nbsp;<div>
I was about to leave empty-handed from a big music store ('Just Music', Berlin), having tried everything ... until, in a corner, I saw it ... it was not even labeled the iBoard 4.
After having a go, I realised had found my new master keyboard.
It has a sublime touch. Only the Fantom G6 and Novation SL "almost" compare with the Neusonik iBoard 4.&nbsp;</div>

Small but important detail: it is a bit heavier than you might think, because it is designed to be steady so that an iPad in its slot doesn't wobble about (and it really doesn't). So if you want complete portability, perhaps think twice before getting it (although it's not actually really heavy).

Checked with iPad and Windows PC (XP and Windows 7). It was instantly recognised and worked brilliantly. I went back the next day to buy two more (I didn't know then that it was already available on Toto). I hope they release 61-key or 73-key versions.

It's simple: for those who would rather not bash the mouse, there is no better alternative (with 49 keys).&nbsp;

Other names: i board 4, iboard4