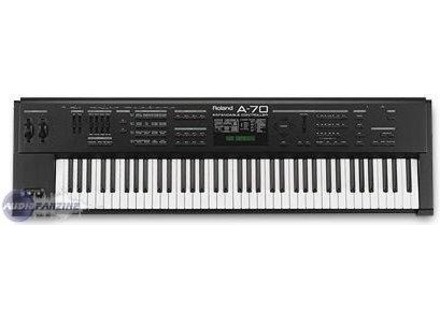 Roland A-70
5
With regular repetitions, the weight of the master keyboard was his main argument (approx. 15 kg). It's actually the little brother of Roland A90 (EX if the card is installed VERD-1) with the same functionality (I had the A90 before, but 27 kg it hurts!).
Differences: 76 keys and keypad light.
RARE MIDI specification for a 76-key: twelve o'clock inépendantes 8 ZONES, splitables together on the keyboard. Otherwise, almost everything is done by noon today is (it is missing the ribbon controller, but it did not yet exist).

Nice touch for a keyboard light, not immitation piano but a slight resistance that can assay a little better.
Synthesizer very easy to use, system sub-menus with easy shortcuts and double click on some buttons for regular computer. Many buttons and knobs are adjustable (but in general, not piece by piece), each zone has a button to be enabled or disabled at any time or to switch to solo.

I used the A70 for 2 years (up there soon). I tried before the A90 and the OBERHEIM MC2000. The sharpest of the three is OBERHEIM (everything parameter for each piece) but the simplest and most AS LIGHT is the A70. With the card VERD-1, you will have some more piano sounds and derivatives that are for me among the best on the market today. Making the studio for 9 years, with the A70 and PROTEUS 2000 SAMPLER ACCESS VIRUS and A3000 was a good compromise for me not too heavy. Today I have a new blend (which costs more and sounds more electro): KORG TRITON LE-76 with extended sampling + NORD LEAD 3 (7 kg + 6 kg).

Hoping to help other keyboardists who have back pain!

angturil's review (This content has been automatically translated from French)

Roland A-70
5
2 midi in, midi out four, routing a total of 64 programmable patches, and especially solid as a cargo Panameña. However I sold the card internal sounds (cause duplicate an RD-500 the era) and I absolutely do not regret it.
It was the era of expanders all is, sets of scne type 747 with cables everywhere, might as well say that the concentration of control and MIDI ports in one machine was a point allchant ... and then its price ... in 7000frs?

A keyboard in the end quite soft but enjoyable for the synthse, depreciation and aftertouch CONTRL offer a sense quite unique .. I reconnatrait miles from the keyboard blindfolded.
The config is logical and APRS several years of practice, programming my patches as quickly became clear. Say anything about the possibilities of MIDI CONTRL protocol, although the luxury to be able t bneficier of the two TO rglages unique for each patch, for example, instead of a rglage overall, mainly for the exclusive, but ... REALLY fun to set the sysex today?
Another ngatif: scne for a keyboard, why Roland had never thought less clear in the pav between digital and key for at least the scnes a bit dark.

I would put 10 because it is a must for many years regarding the MIDI controllers ... oh yes mr Roland: the design is nice, but who had this ide to a rear edge so steep? this is not the A70 too heavy, but with the rear shall adopt, the cover 50 meters arm's keyboard into the air and on the edge hanging back with the fingers a nylon ...

For over 12 years that this keyboard follows me everywhere, and scne studio, and through time in a state copy. Unbreakable you say? no, but almost!
I would do if this choice? ... I think mine replaced by another of the same brand / same MODEL (used) ds it will begin to want to stay for the vagaries home

luchogie's review (This content has been automatically translated from French)

Roland A-70
5
I was looking for a sexy machine, a super mcanique possibility of keyboard and MIDI merge.
The A70 has everything a.

I bought a card VE-RD1. The sounds are quite good. None are bad. Nothing was thrown away. There bcp pianos ... Maybe it would have been wise not to put as much (which would have made room to put anything else). The possibility to set layer (easy) 4 sounds can be big sounds!

The feel is great. I have never seen a keyboard like a. So cool.
We feel the ds first glance it's pro gear. See anything
with other keyboards, even the ones trs.
Operation is simple for a guy not too stupid. You should get out.

I for 1 week. I love dj.
This is the keyboard I mcanique prfre. It is lightweight (but not too)
prcis, smooth ...
Before I tried Studiologic keyboards (not bad), Yamaha (the good
at worst), Roland JV90, U20, D70 (very good) ...
There's nothing to say, the A70 delivers them all.
If you find one in good condition for less than 400, Do not hesitate.
Did you find this review helpful?yesno
»