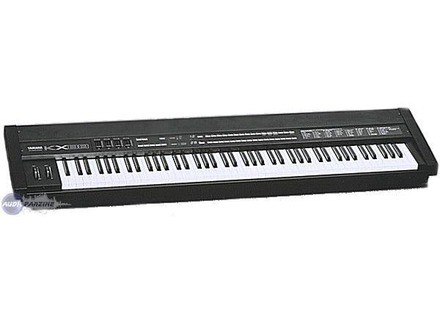 The touch keyboard is perfect much better than the imitation Hammer low end.
The manual is unclear, the parameter editing midi is something difficult, I use it with default settings.

It is still expensive for his age, but it has the reputation and it has not equivalent. I would buy anything by putting a lot more.

Yamaha KX88
3
I bought my ds KX88 its output (in 1985 I think) to have a true piano touch and 88 notes with my DX7.
He does comes with two pedals (CONTRL continuous volume, and switch control to sustain), they are essential. I bought a Yamaha Breath Controller, for brass, but it's gadget.
The mission on two MIDI channels is fundamental to use of the keyboard of Manir indpendante KX88 (for piano sounds, eg. Midi1 canal) and the keyboard of a synthesizer by the pilot KX88 (eg. a DX7 for tablecloths.
But despite all evidence on its reliability KX88 has two big default:
- Yamaha keyboards with built better feel for 26 years, but they are more fragile for use of scne
- And especially the dynamics of the KX88 is truncated, instead of putting vlocits between 0 and 127, as is the standard MIDI (and as all existing keyboards) IT is that in the interval 15-127. Thus the pianissimi are impossible again. I did confirm this (easily measurable elsewhere) by ingnieurs Yamaha, but no solution could m'tre propose corrective .... TRS is a shame.

Touch is enjoyable, fairly soft compared an acoustic piano, but mostly it has not moved in 26 years! No key is out of order, and yet I carted in scne scne of his fly-padded box and a few scratches it is like new!
The manual is trs technique, but once you ADFinance limits the use we want to make this keyboard master, simply for ease of use. I do not use eg. sending MIDI Labor, and I figure once and for all the fact of putting on midi channels 1 and 2, the fact that the pedal swith gre sustain the channel 1, and CC pedals gre volume of channel 2.

So I for 26 years, the era c'tait a luxury (F 30,000 I think) but it will easily pay! I test many other keyboards, including the Roland or Fatar (including those of Kurzweil synth), but only other Yamaha keyboards have been Exceeds, I think.
To have another keyboard matre 88 keys with me (I keep KXX88 for scne because it is a legendary reliability) I bought a Yamaha S90 ES and I think soon m ' Teams also dun Yamaha Cp-50 more lightweight but substantially the same technology as the S90. Both keyboards can replace the KX88 as they are also two channels for MIDI and they have entries for the control pedals, but they are also the internal modules possdant synths sounds. Too bad Yamaha does not produce clavliers matres simple keyboard with S90 or CP50, KX88 from this brand does not t able to produce a master keyboard that is a true successor to the KX88.
In short: the era and for fifteen years, the KX88 has t irreplaceable for me, so this is the obvious choice. Now, Yamaha has done better but not as simple keyboard matre: you have to buy a workstation type S90 or CP50 to have a master keyboard to suprieur KX88 (except reliability, but is paid also a weight - 30 kg - rdhibitoire, all-steel heavy it is roughly the animal!) And of course the problem of dynamic truncate t corrected.