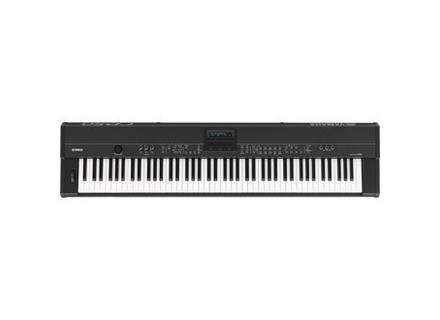 Michelwolf's review (This content has been automatically translated from French)" Sorry ... Strictly unusable ..."

Well .... Why strictly unusable? ... Certainly, very good touch, although the piano sound (when you manage to find them ... I'll come back ...) are a little disappointing. I have a P105 also supposed to be a range (very funny ..) below, and I think the two best piano sounds .. In short, matter of taste ...
So unusable because, and I'll try not to write it in raging case, there is no way of didactic use, consistent, describing step by step all possible operations, and I have no doubt that are many. Unable to navigate the pretty little buttons adorning the facade. with exotic names, pre-amp, mod-fx, utility, etc ... Spliter is a nightmare, can not find the path to select a particular sound to the left or right. This is just one example ...
I called Yamaha France, they sent me an email absolutely unnecessary, avoiding to answer the basic question: why are there no instructions worthy of the name?
I was there last Thursday and I got nothing satisfactory, if not basically use the piano, finding each sound empirically.
I'm not on the verge of hysterics, I'm in ...

With the experience I certainly do not do this election ... Otherwise, when you know how to use ç'est good value for money ...

Yamaha CP50
4
The CP50 is well suited for use scenic, number of knobs to adjust the settings, a lot of sounds in addition to the piano, it makes it quite versatile.

Touch is very good, the instrument still a need grip, with many settings you can adjust its sounds very precisely. EQ effects.

The piano sound is dynamic and homogeneous, we can all play with, we can blame him for a lack of character and looping a bit short but in case it is very convincing. Rhodes sound lacks a little presence must be compensated with the effects and simulating preamp ditto for wurly.

This is a very good intrument, a tool well suited malgrès few default.

the -:
missing sounds a little character
delicate finish
output level a little low
Did you find this review helpful?yesno
»

Yamaha CP50
4
I had this keyboard for a year and it is very good (I have a Nord Stage EX to compare). I sold it because too heavy to move.
Very good rhythm to lead, too bad we can record a track in the sequence.
The piano sound is good, different from Clavia, more subtle pieces of calm, at least nice harmonics with the pedal, but it is mostly a matter of taste. The rhodes sound is also different
The touch is heavier than the Clavia what is right to build muscles the fingers, it takes some bad habits with the Clavia!

Yamaha CP50
The features of this keyboard YAMAHA 88 notes are widely described in the manufacturer's website. It comes with a FC3 sustain pedal jack (stereo) and Cubase AI 5.
Side computer links, there are MIDI and USB.
MIDI performances are very complete (can split the keyboard into four distinct zones, and transmit on MIDI channel 4, indispensable function for controlling synthesizers or sound modules on stage from the CP50)

I bought this keyboard mainly for the quality of his touch, as well as extensive MIDI functions, primarily because I need a master keyboard 88-key hammer to replace my old (25 years!) Yamaha KX88 on stage. The latter, although still operating as the first day is heavy and cumbersome, outdated and technically on two key issues: the dynamics and touch "piano".
If the CP50 piano is very good, the other sounds are well below. I use Kurzweil synths (K2600/K2661) on stage, whose sounds are incomparable in both acoustic instruments for sound synthesis, having, in addition to a master keyboard class, a piano well made in the CP50 is a plus, but when we have Kurzweil synthesizers, it is not necessary.
The logic of setting the CP50 and the manual is somewhat confusing, but you get done quickly, because the possibilities are actually few in number (compared to a synthesizer).
I have not tested the functions for creating or editing pieces using CUBASE AI 5, my first priority is the game live on stage.

As mentioned earlier, is primarily the sound of acoustic piano that makes the value of CP50, and Margin certain kinds Rhodes electric pianos, the rest is anecdotal.
The expressiveness of the keyboard, due to the quality of Graded Hammer system is very good, that's why I bought it. It is comparable to the Yamaha S90 ES that I have too, but that is too fragile and bulky for the stage. It is much better than my KX88, which I keep because it is indestructible.
The effects are subtle but limited, nothing to do with a multi-effect type KDFX Kurzweil.

The CP50 is above all a master keyboard ideal for use on stage beside sound, except for the piano sound, it can not compete with real synths like the Kurzweil K2600. The CP50 (excellent keyboard sounds limited) and K2600 (keyboard very average, varied and excellent sound) complement it very well, so I bought the CP50 after trying lots of models for a keyboard heavy touch of quality.
Its ratio Q / P is interesting, especially if you go to a French discount store based in Valencia. The reliability is legendary Yamaha keyboards (my KX88 in 1985, he saw all the colors!) And CP50 comes with a 3 year warranty.
It's a choice I do not regret.

Did you find this review helpful?yesno
»
Read the 7 user reviews on the Yamaha CP50 »

Yamaha CP50 manuals and other files